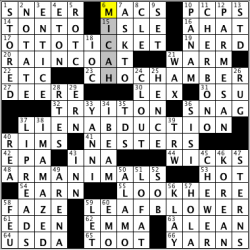 Hello there, everyone! Hope you’re all doing well to start your week!

Today’s puzzle is more fun with puns, as the first four theme entries are wacky takes on common phrases/nouns, with the trick being that the first letter of each phrase is removed to create the pun. The four letters removed from the starts of each of those entries end up spelling out L-E-A-F, which leads to the fifth theme entry and the reveal, LEAF BLOWER (59A: [Noisy yard tool that cleared away the characters in 17-, 23-, 37- and 48-Across]).

For over 30 years now, I always knew the nickname of New York Yankees great Joe DiMaggio was “The Yankee Clipper,” but had never really researched the origin of it until finishing this puzzle today, doing so after reading the clue for PAN AM (10D: [Yankee Clipper airline]). When doing the research, we find that, in 1939, DiMaggio was given the nickname by Yankee Stadium public address announcer Arch McDonald, who compared Joltin’ Joe’s speed and ability to cover ground in the outfield to the Pan Am airline. Man, the nicknames what were doled out by sports writers and other people involved in sports during an earlier generation (e.g. Sultan of Swat, Splendid Splinter, Galloping Ghost, Say Hey Kid) were just iconic in nature and still have a ring to them decades after their coinage.

I totally was put on a music track by the paralleling entries of CHER BONO (11D: [Full name of Sonny’s singing partner]) and I’M AMAZED, the latter making me think of Paul McCartney’s “Maybe I’m Amazed” classic (38D: [“Oh, wow!”]). Favorite clue/entry pairing of the day was that for LIP-READS (37D: [Interprets by word of mouth (so to speak)]). Basketball season is around the corner, so, for those who are fans of “THe Association,” we hope that KLAY can get back on the court as soon as possible after his ACL injury in the 2019 NBA Finals so we can once again marvel at his long-range shooting prowess (56D: [NBA star Thompson of the Golden State Warriors]). Before we go, a few words about another basketball legend…

“Sports will make you smarter” moment of the day: WICKS (44A: [They get lit in a candle shop]) – Former WNBA player Sue Wicks was, almost inarguably, the greatest basketball player in the history of Rutgers University, as she was a three-time Kodak All-America selection (1986-1988) and, in her senior year of 1988, won a number of national player of the year awards. Among other other accolades, the 6’3″ Wicks ended her collegiate career as the school’s all-time leader in points (2,655) and rebounds (1,357), with those numbers remaining the records in those categories for men and women. After playing professionally overseas for a decade, Wicks was drafted by the New York Liberty in the inaugural WNBA Draft in 1997. Wicks played six seasons with the Liberty, making the WNBA All-Star Game in 2000 and being an integral part of four Liberty teams that reached the WNBA Finals (1997, 1999, 2000, 2002).

*NOTE: The next time “WICKS” appears in a crossword that I’m blogging, I’ll talk more about former UCLA legend, NBA Rookie of the Year and four-time NBA All-Star Sidney Wicks. (No relation to Sue Wicks.) 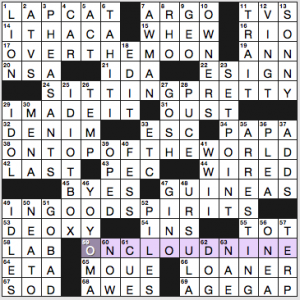 The theme is phrases that mean happy or content, clued as if they specifically pertain to various occupations:

Cute theme, but SITTING PRETTY needed to be replaced. Anyone know a good 13-letter phrase that means happy?

3 stars from me. Would be higher if SITTING PRETTY had been swapped out for a happy synonym. 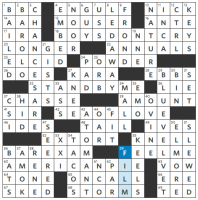 If I’m interpreting this theme right, adding the parenthetical number to each song’s year gives us a new year in which a movie of the same name was released. This feels like it could be a good idea if it were tightened up / modernized a bit, but most of the songs are from relatively long ago + a few of the movies are decidedly less well known that this theme feels more like a, “oh okay, that’s a thing” than a “wow!” moment. It also feels like there could be many examples of songs who share the same name as a movie, but that these ones were chosen for this puzzle only because they symmetrically fit into the grid. Also, all of the songs used as theme entries in this puzzle were sung by men. In fact, DOES and Supergirl / KARA are the only women / female entities in the entire puzzle vs. soooooo many men. Sadly, the ratio isn’t even close.

What I did greatly appreciate about this puzzle was that it was dense in theme-related fill without sacrificing much at all in the way of clean fill in the grid. Sure, there’s a SLEWED here and BAROLO there, but it otherwise felt like a smooth solve that fell gradually and fully. That’s certainly a win!

A delightful offering from Mr. Mossberg today. I’m not familiar with the constructor’s name, but I thoroughly enjoyed today’s Universal.

THEME: “Beasts” with homophone-ish starts to their names.

Don’t you want to cuddle with me?

There wasn’t much not to like here. Consistent theme and- as long as your willing to look past RESEDA (the anagram hint in the clue was much appreciated)- the fill was mostly smooth. Maybe no long, splashy “new” entries (78 words in the grid will do that), but not much to cringe at.

All of the animals were fun to uncover. Caught on to the theme at BANGLED TIGER because part of me thought that perhaps cuttlefish was indeed spelled as CUDDLEFISH.

Can’t say I truly understand the title, though. 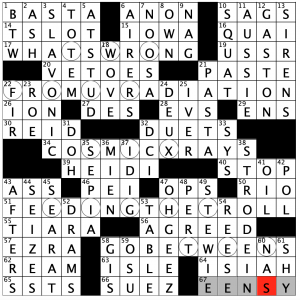 This was the type of theme that I could actually fill in a bunch of letters early! Once you saw what went in the first few circled boxes, it was off to the races:

Bravo, Matt! It cannot have been easy finding answers that fit these patterns, and they are in order to boot. The constructor in me senses that this couldn’t have been that easy. 4.4 stars from me this week. 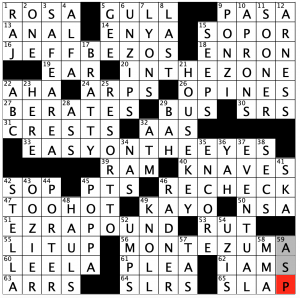 Well done! Not too complicated, but it IS Tuesday! I got the central answer rather early in the solve, so that helped get the last couple of themers, but they weren’t too difficult even if you didn’t know they had the same E-Z sequence as all of the others mentioned in 33A. We’ll take it! 4.1 stars for this one.