Brian Herrick makes his WSJ debut with this grid. Congrats! He’s brought us well-known phrases that have been re-imagined as having to do with the acting profession. 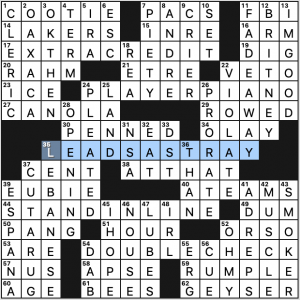 I like this theme quite a bit. It’s solid and demonstrates good, consistent wordplay.

The only nit I’ll pick is the clue for STAND-IN LINE. Not being at all familiar with acting terminology, I didn’t know the exact meaning of the term “stand-in.” I assumed it meant an understudy of a sort. But that’s not the case. A stand-in is used (in film and television anyway) prior to filming so that the technical crew (lighting, photography, sound) can make adjustments to the equipment before the actual actors are called in. This is all done off-camera, unlike a “double” who replaces the actor on-camera when needed. But I had to look all this up and I don’t think it’s quite fair to assume a solver should know that a stand-in helps “light the scene.” I’d think a straighter clue of [Queue for actors’ proxies?] would have worked better.

But that little nit aside, I enjoyed this fun theme.

There’s quite a bit of long fun fill in the corners here, especially that swath from “I’M GOOD” in the NE down to ESPAÑA in the SW to include FADE AWAY, LEBANESE, and CUT A RUG. In the opposite corners we find “OK THEN” crossing the LAKERS as well as RUMPLE, MUSCLE, and GEYSER. Not bad. I like COOTIE at 1a as well, but it looks odd in the singular. I could do without ETRE and NUS, but those are small potatoes. 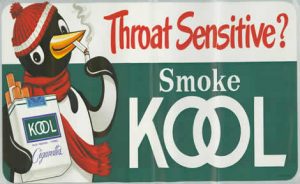 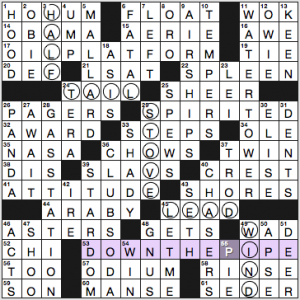 Here’s a theme for plumbers: There’s a winding pipe traversing the grid, made of words that are followed by pipe to fit their clues, and then there’s a revealer, 53a. [How a perfect pitch comes … or a hint to the missing parts of the circled answers], DOWN THE PIPE. No idea what baseball pitches have to do with this, and Merriam-Webster doesn’t seem to know, either.

Oh, hey! I just realized there was more theme here. The OIL PLATFORM, WATER TOWER, and GAS STATION all involve pipes, too. Thumbs-up to the constructor for separating the short pipe words by black squares rather than smushing the fill in a section to coordinate with more intersecting themers.

What else? Let’s see:

Four stars from me. Cheers!

THEME: Answers use the initials ff and are clued with their volume in mind 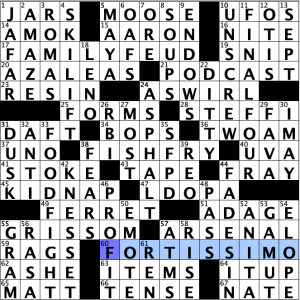 I loved this puzzle. Starting with the theme, which I adored – it works twice, with answers literally represented by ff as their initials, and all are clued in ways that draw attention to their loud nature. Before I got to the revealer I was able to anticipate that it would be FORTISSIMO, but knowing that didn’t take anything away from solving – and it made me smile so much. Just perfect.

Even before I got to the theme, I knew I’d love the puzzle from the start with JAFAR crossing AZALEAS in a corner that’s very scrabble-y without any junk answers – absolute beautiful. I also enjoyed seeing both STEFFI Graf and Arthur ASHE so soon after the US Open.

Overall, the fill and clues were straightforward. Every unknown proper noun was crossed fairly, so I didn’t have any sticking points throughout the puzzle. The layout of the grid is also really nice. I’m not always a fan of mixing down and across answers for themes, but it works for me here and the design allowed for a really smooth solving experience. 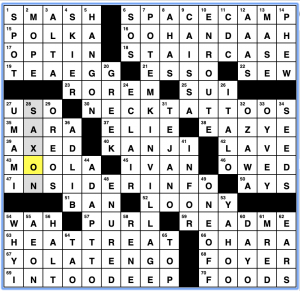 Ben Tausig promised that today’s themeless puzzle from Wyna Liu was a 5/5 and it absolutely delivered on that, both in difficulty and quality.  Let’s run through some of the highlights of this grid:

Did Sum 41’s “IN TOO DEEP” start playing for anyone else once they got 69A? Just me? 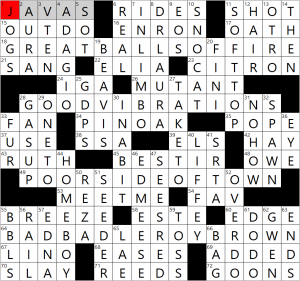 The puzzle goes long to accommodate two 16 letter theme answers. The theme concept is simple enough – four #1 (very) oldies – each with an adjective from GREAT to BAD. I feel like POOR should have gone before BAD, though that messes with the letter counts. I didn’t know POORSIDEOFTOWN – the only Johnny Rivers I grew up with was his folk covers album “Johnny Rivers Rocks the Folk”. The other 3 are definitely iconic songs from their era, though.

I struggled a bit in the SSA area which also features an awkward plural abbreviation – GDPS. The puzzle was unsurprisingly heavy on filler, given four spanning answers.