Theme: The trigram -ILE is added to the ends of common phrases. 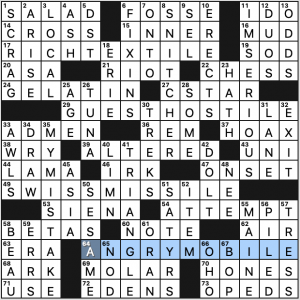 As distracted as I was by the MISSILE in the third entry, I didn’t grok the theme until I was nearly finished with the solve. At that point I was both relieved that I had sussed it out and somewhat disappointed in what seemed like another “add some random letters” theme.

But I was wrong about that last bit. The title, “Projectiles,” should probably be re-parsed as “Project ILEs.” In other words, it’s an instruction to extend ILE beyond the end of the common phrases in the theme answers. OK, I suppose that works.

Moving on to the fill, “I’M SERIOUS” and “MY MISTAKE” make for a great pairing of conversational entries. Other goodies include SATYRS, GELATIN, and FIXINS [Southern side dishes] which my Arkansas-raised wife is prone to say, although I think it also includes things like condiments and such.

I’m not so keen on SCRAG [Gaunt guy] which I doubted even after I checked all the crossings, (seemingly) random-lettered C-STAR [Cool red giant], uncommon LIMN, and crosswordesey ORAN with a geographically-challenging clue [Port across the Mediterranean from Cartagena]. This made me doubt what I knew to be true: that Cartagena is a city in Colombia. Apparently it is also a city in Spain. 900k inhabitants for the former, 200k inhabitants for the latter.

In the end, summing up all the plusses and minuses gives this puzzle a score somewhere around 3.4 stars.

If I didn’t have to write this post, I might have kept banging away at it for a few days – and I still wouldn’t have finished it, because it includes one answer I’ve never heard before, one I’ve never used in a sentence and rarely seen, and one that is totally out of my wheelhouse. I would have struggled with those in a normal puzzle. I filled in about 75% of it and then looked at the answer key. Revealing the letters in the grid wouldn’t have told me what the words were. 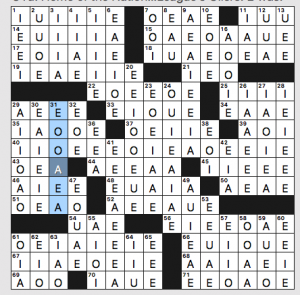 For the record, the word I’ve never heard before (and what I didn’t know before I did this puzzle) is 66a, EQUIVOQUE, clued as [Pun]. The one I’ve never used in a sentence is 1d, INTERMEZZI, and the one out of my wheelhouse is 56a, ENGINE PERFORMANCE, clued as [Functioning that’s improved by a turbocharger].

I had EDMONTON, CANADA instead of EDMONTON, ALBERTA because I’m a chauvinistic US-er.

This could have been fun. I expected it to be fun. I didn’t really enjoy it. Just me? 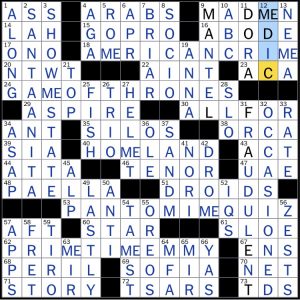 Today’s NYT from David Kwong is nicely timed with this weekend’s upcoming PRIMETIME EMMY awards, and has a fitting theme:

As mentioned at the top of this recap and in 62A, “…each of the programs in this puzzle has won” a PRI(ME)TI(ME) EMMY award (or two, or more) in their run, and each of them contains at least one instance of an (ME) rebus square.  And that’s kind of it?  I kept waiting for a revealer in the down clues to do something with ME TIME or something that elevated this past TV trivia, and if it did, it whooshed right by me as I solved.

EDIT: oh, duh, “M-E”, Emmy.  I still think I would have preferred a revealer on this.

The rebus squares affect the down fill nicely, with SHOW (ME) STATE, RO(ME), NE(ME)A, HEL(ME)T, DRO(ME), TA(ME)ST, and Golda (ME)IR making appearances.  The packed nature of this theme means that there’s a few LAHs, NT WTs, and ENS/NET/TDS in the edges of the grid that are a little crosswordese-y.  That’s the PERIL on this type of theme, I guess.  I did like FRAUDULENT and OCCASIONED in the lower right corner, though.

What show will get an Emmy to put on its MANTEL this year?

I really can’t believe I have to do this again. It’s literally the third time within a week. This write-up is essentially a repeat of this write-up from a week ago, which features the same theme type, executed perfectly well (like this one), but requiring circles… which Universal does not provide.

Imagine you don’t solve in Across Lite (like a normal crossword solver looking for a simple diversion), and what feels like every other day, you’re being asked to count and circle your own squares. Because… because… why? (I haven’t yet seen what the non-Across Lite version is asking its solver to do at this point, but if it’s business as usual, then unnecessary math is involved)

THEME: Dances are “broken” in the grid

I’m sorry, Sophia. You fell victim to the “Good puzzle! Bad delivery!” theme that is not at all your fault. I’m stymied as to why Universal is running a bizarre number of circles-needed themes when they cannot figure out how to include circles.

So, here’s my plea. Once again. It’s a screenshot… and it still shows up in my “recently used” files:

Until Universal can figure out the solution to what should be a non-problem, they should quit publishing themes that need circles. Stop repelling potential constant solvers.

4 star puzzle gets a 1 star rating from me. That’s a shame. Fantastic title, though! 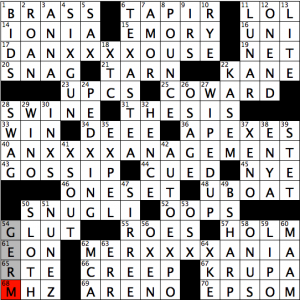 Sorry for the late post — a long day became a long night, and here we are.

The term “cancel culture” being so squarely in the zeitgeist, you knew it was ripe for BEQ to build a puzzle around. Here, we have three entries containing 54d, GERM [Culture that has been canceled in the long theme answers]. The down entries crossing GERM in those long theme entries have X’s where the letters GERM would appear, so:

A nice execution of the concept, with a lovely little “aha” moment. What more can I say? (NSFW language in the below clip.)