This was a fun Monday puzzle with a fresh theme. All the theme answers have essentially the same clue. 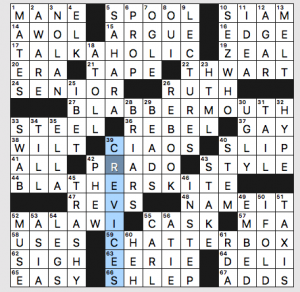 I haven’t seen this theme before and I enjoyed solving it. It’s easy enough for a Monday and engaging enough for more experienced solvers.

What I didn’t know before I did this puzzle: the CIAO means “hello” as well as “goodbye.” 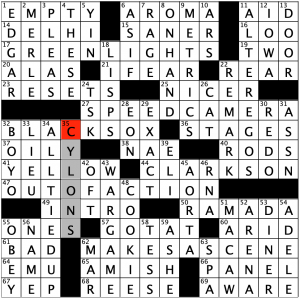 This is a great, easy puzzle. A classic theme-type, very well executed. The end of each themed answer gives us part of LIGHTS, CAMERA, ACTION! with the phrases MAKES A SCENE our very-literal revealer – just a great solve all around.

The fill is pretty great too. ALTER EGOS and ALL TIED UP are superb, lively answers that were fun to discover while solving. And of course this Battlestar Galactica fanatic was excited to find CYLONS in the grid. It’s also never bad to have a chance to see Kelly CLARKSON and ADELE together. We had a little color mini-theme happening too with GREEN LIGHTS, BLACK SOX, and YELLOW all leading off rows, which whether intentional or not was another cool part of this puzzle.

A couple of clues I want to mention as well – the clue for CAT [Pet that’s not fetching?] made me laugh – and the clue for OBEY [Controversial wedding vow verb] – with it’s indication that the verb is a problematic one when it comes to wedding vows – made me so happy.

I was trying to figure out which area of the puzzle I was going to consider my favorite, but looking back at it the grid was really so well constructed with so many great answers that I loved it all.

Theme: Well-known(ish) quotes of the form verb noun verb, where the verb is repeated for emphasis. 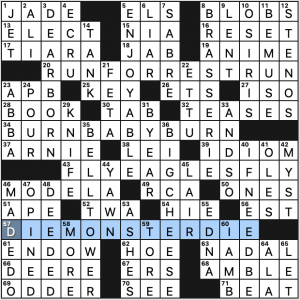 It occurs to me that you can follow each of the phrases above with “Disco Inferno!” and it still works well enough. Go ahead and try it. I’ll wait.

I thought this was lively and fun, and the repetition made sussing out the lower entries much easier, which is not a bad thing on a Monday.

The fill is lively as well with BRASSERIE, BELL TOWER, DEARBORN, BIG CHEESE, and IF NEED BE. Quite an ENJOYABLE set!

I had no idea on MODEL A [Ford’s first car], but since I got it completely from the crosses, it was a non-issue. Could do without archaic HIE, though.

Everything else is clean and by the book. A fine, fun puzzle. 3.9 stars.

Of all the New Yorker puzzles I’ve done recently, this was probably my least favorite, but that’s not actually saying very much about the quality of the puzzle, because it’s still quite clean and contains several entries/clues that I enjoyed! This is an objectively good puzzle, but a few details kept me from fully enjoying it. 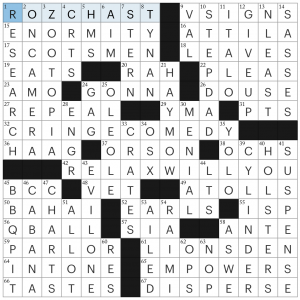 For one thing, putting ROZ CHAST at 1-A in a New Yorker puzzle feels very “look how clever and self-referential we are being!” of them. Possibly I’m just cranky about it because it should have been obvious from __Z_HAS_ and I feel silly about getting it last, but crossing TYNAN (?), CRTS (??), and the delightfully-clued-but-difficult to infer RESEARCH was a challenge.  I also don’t think of ENORMITY as a synonym of “Outrageousness” (in my mind ENORMITY is morally neutral, but the first definition does appear to be “enormous wrongness” rather than “enormousness”), so that NW corner was just tough for me.

To address a conversation in the comments from last week, I want to add that I agree with the consensus that New Yorker Mondays are designed to be harder than New Yorker Fridays. I’d say these Mondays are like NYT Fridays, and these Fridays are like NYT Tuesdays, if NYT Tuesdays were themeless? The Monday cluing definitely seems to skew towards the less obvious (e.g., the clue on ZOOTOPIA, which in this case required that you have at least some idea what the film was about, rather than just knowing that it won the Oscar for best animated film. Or, ITALO disco rather than ITALO Calvino).

Overall, a solid puzzle, but less exciting than other New Yorkers. (Grading these puzzles feels like grading on a curve where the baseline is the excellence of other New Yorker puzzles, so this is still VERY good.)

Anyone else having trouble downloading the Across Lite file? I solved in the applet on the website, which was a first for me. Not all that bad though! ***Update: Across Lite issue has been fixed*** 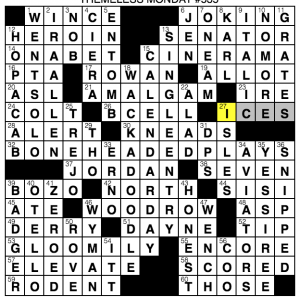 Surprised myself by completing this in what felt like below average time, considering there was a lot I did not know. Names that were foreign to me included Erick ROWAN, IRA ALLEN (who I can only assume lived in Ethan’s shadow!), Gish JEN, KARL Lagerfeld, Danny TREJO, ERNO Goldfinger (surprised I’ve never seen the last name clued considering the number of times ERNO has appeared in a grid). WYMAN, DAYNE, and WOODROW were amongst the names which only required a letter or two to jog my memory.

There’s a hilarious Taylor DAYNE encounter story that Tig Notaro told on This American Life. I highly recommend taking the time to enjoy it:

Not sure how I feel about BONEHEADED PLAYS as the featured grid-spanner. Is that a solidly in-language phrase? It feels… I dunno… somewhat vague and “green paintish,” but I could be wrong.

While I could always use fewer names in the BEQ, it’s a testament to the cluing and construction that I was able to wade through it all. 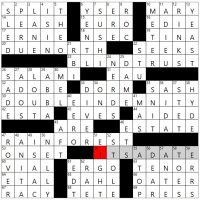 20A: DUE NORTH [Zero degrees, on a compass]
23A: BLIND TRUST [Fiduciary entity whose holdings are unknown to its beneficiaries]
39A: DOUBLE INDEMNITY [Life insurance clause specifying twice the payment for certain situations]
47A: RAIN FOREST [Wet wooded region]
54A: ITS A DATE [“I’m there!” … and hint to the first part of the answers to starred clues]

Due date, blind date, double date, and rain date. Nice! This feels like a tight, consistent, and largely complete theme of ___ date phrases, which I appreciated. This was also an incredibly quick solve for me, which says something about the clean cluing and lack of crud in the fill. Sure, the YSER/ROC crossing will get some folks, but it otherwise felt doable.

Big plus for this puzzle: Can we talk about the number of women represented throughout the grid and cluing? MARY, EDIE Adams, TINA from “Bob’s Burgers”, Lois LANE, Streisand, DAME (although clued as a man’s object), SADE, Maria and Anita from “West Side Story”, NELLY Furtado, ballerinas, and Charlotte RAE. Yaasss! This is what we so rarely see.