In thinking about how to start a write-up, I decided that “Pet Sounds” by the Beach Boys would make for nice background music. Even if they’re not all pets per se.

I’m a sucker for homophone themes. They are always reliable, and easily accessible to newer solvers. Sure, the “animals as homophones” has been done before (both the EWE and the GNU are probably like “Enough already!”), and it’s not exactly ground-breaking to be using song titles as a platform, but it was an enjoyable solve. I do appreciate the level of diversity in the themes (from easily grokked to mind-bending) in the WaPo. Nothing is more boring than predictability.

This is the type of puzzle that hooked me as a solver decades ago, and I hope it does the same for someone else. I like that the last theme entry was almost a punchline with all of its words being repetitive homophones.

Weird that my first entry in the grid was GIANT PANDA. Not only because I started in a bizarre spot, but it’s another animal that is unrelated to the theme.

No probs with this puz! It has its merits in the WaPo lineup, even if it might not pose too big a challenge to the seasoned solver. You know what that means, though… expect a curveball in the near future.

Tracy Gray’s New York Times crossword, “On the Up and Up”—Amy’s write-up 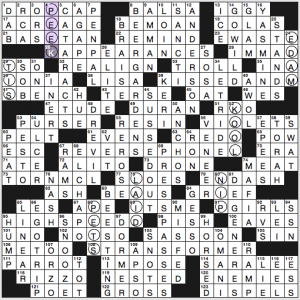 Phrases that include up are rendered visually by running the word that precedes up in an upward direction perpendicular to the rest of the phrase. That upword is also clued as a Down word that’s the backwards version.

I mostly liked the theme all right, and the fill was solid. Bright spots include DROP-CAP, BASE TAN (wear your sunscreen!), VIOLETS, Vidal SASSOON, EL CHAPO, BEE STING (apparently bumblebees have taken to stinging people this year! what’s up with that?), BEER GARDENS, SUSSED OUT, and PRESS PASSES.

This appears to be a debut from Nguhi Muturi! Congrats and welcome!

I hope you solved this in Across Lite so you weren’t STYMIEd by having to count and circle your own letters. Because, ya’ know, Universal loves to run themes that would typically include circled letters. It’s just that they refuse to provide those circles. Of the last 8 Universal puzzles I’ve reviewed, half of them would’ve include circled letters by any other publisher. I feel like I’m being trolled.

THEME: Words that can follow “hot” are broken up on the outsides of familiar phrases.

This is a very nice puzzle, especially considering the number of theme answers and the clean (for a Sunday), hip grid. I’m especially impressed with the two horizontal themers cutting through the grid without creating any confusion.

PUB GAME (even though I’ve never seen Jenga played in a pub), I SEE NOW, BY GOD, FOMO, DAD BOD, and GENOTYPE. Also I never get tired of MEH. It’s just fun to say. Every one of the theme answers was also firmly in-language and the trivia for MIND YOUR BUSINESS [Words on the first circulated U.S. coin] was fantastic!

Some ugly stuff, like DIP IN (?), and RIDIC (modern, for sure… just not sure my brain can process it as a written word). But overall very smooth.

I end with a screenshot of the very simple plea to Universal. I understand that seasoned solvers aren’t likely to balk at having to count their own squares, but I think puzzles like this would be far more accessible to all if they included circles (as it was likely intended). Also, for a newer solver the circles pique curiosity and may encourage him/her to dive in.

I enjoyed this puzzle. Each theme answer is a word or phrase that starts with a movie name and is clued accordingly. 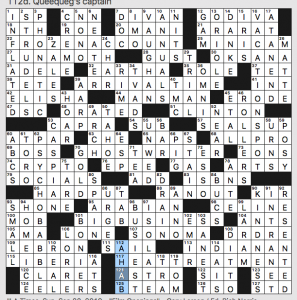 All the base phrases are solid, all the theme clues are amusing, and it was fun to solve this puzzle sitting here on my porch watching birds bathe in the fountain. You might not enjoy it quite as much without the porch, the birds, or the fountain.

What I didn’t know before I did this puzzle: that STRUDEL means “whirlpool” in German. 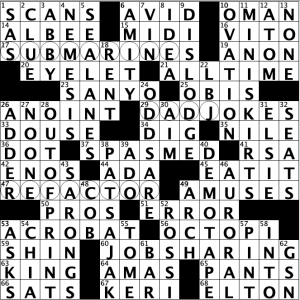 This theme is fine – and I suppose the revealer works? Two jobs are shared in each themer? It felt like something co-workers would be be more appropriate with these answers than JOB SHARING, but it’s inferable by what was done here. My biggest issue here was how inconsistent the answers were. Of course, it’s going to be easier to find answers that have words like ACTOR or MARINE and not necessarily District Attorney, but having some abbreviations and partials, while others were full titles, felt mismatched.

To me, this puzzle shined a lot more in it’s non-theme answers. Long downs like DEMO TAPE, OUT OF PRINT, MINI SKIRTS, SEA LANES, NEMESIS, SARONGS, OVATION were the real joy of this solve. DEMO TAPE also had my favorite clue of the day [Rock sample?] with PAT SAJAK [Spinning instructor?] a close second – just for the mental image of him leading an actual spin class.