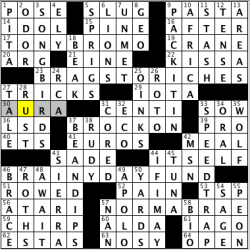 Hello there, everyone! Autumn has arrived, and I hope you are all doing well as we begin a new season!

We have more pun action for today’s grid, with phrases/nouns being altered by adding the letter “B” to the beginning of one of the words in the theme entries.

Enjoyed a lot of the long non-themed fill, from SPEED TRAP (33D: [Fast driver’s worry]) to PACK IT IN, something I definitely do not try to do, in the pejorative sense of the phrase, when blogging on here for you guys (9D: [Finish for the day]). Just read about Ron ELY once again, and it mentioned that he did almost all of his own stunts in his role as Tarzan and actually suffered numerous injuries, including being bitten multiple times by lions (4D: [TV Tarzan Ron]). Yikes!!

Much love for the touch of AFRICA (10D: [Kilimanjaro’s continent]) in the grid, including the Nigerian-born SADE (43A: [“Smooth Operator” singer]). Seeing POSE reminded me of how inflexible I have become during my once-a-year attempt at yoga for the football/academic camp that I work at in Texas (1A: [Lotus or Cobra, in yoga class]).  One of these days, I’ll make yoga a part of my everyday routine…hopefully…maybe.

“Sports will make you smarter” moment of the day: RUST (28A: [Fall color]) – This might come as a surprise to some, but there used to be a time when the New England Patriots, who have appeared in nine of the last 18 Super Bowls contested, used to be terrible! The team’s nadir came during the 1990 season when, under the direction of head coach Rod RUST, the Patriots posted a 1–15 record. It was the only season Rust was a head coach in the NFL, as he was fired after that disastrous year. Oh, the good ol’ days when the Pats used to be the laughing stock of the league.

On a more serious note, the 1990 Patriots were the central figures in a widely-remembered sexual harassment case, as Boston Herald reporter Lisa Olson sued the team and specific players on the roster for indecent behavior displayed by Patriots players around her in the locker room. While the team and the specific players were fined after a league-mandated investigation, Olson was subject to death threats by Patriots fans and also saw her house burglarized and the tires on her car slashed. The threats and trauma Olson endured eventually led her to accepting a transfer to work as a reporter in Australia. Thank goodness that major progress has been made in guaranteeing equal access for women to enter locker rooms of pro sports teams, though, given my experience in locker rooms and press boxes, more still needs to be done by sports teams and media organizations until we can ensure a completely safe working environment in sports media. 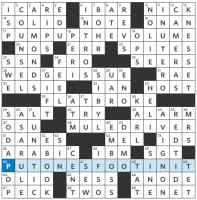 17A: PUMP UP THE VOLUME [Shout to a DJ]
26A: WEDGE ISSUE [Divisive political topic]
35A: FLAT BROKE [Penniless]
48A: MULE DRIVER [Figure in old Borax ads]
60A: PUT ONES FOOT IN IT [Say the wrong thing, or what to do with the first words of the starred answers]

I generally liked this theme – each theme entry starts with a type of shoe, fitting the “If the Shoe Fits” title nicely – and I enjoyed the spin on the revealer phrase, though it feels like some of the themers were reallllly long entries just to get PUMP or WEDGE. Also, MULE DRIVER? What century is this answer from? Also also it seems inelegant for the revealer and 21A [Do the wrong thing] ERR to have essentially the same clue in the same puzzle, but not be connected to each other.

And, with all due respect, how long has this puzzle been sitting around? Let’s look at the references used in the clues: EarthLink, AOL, IN UTERO, Frasier, Robert Morse’s TRU, Janis IAN, old Borax ads, EBOOK, and MEL Torme. Aside from Nirvana’s 1993 album, is EBOOK the most “modern” reference in this puzzle? Bleh. If one of the goals of modern crossword constructing is to bring in newer solvers, this puzzle misses the mark for me. Even if this grid has been sitting around for 20+ years, at least the cluing could have been modernized. No?

Otherwise, this puzzle was fine. No incredibly sticky fill, but UAR IBAR OLIO PERI OPS didn’t make for the most joyful solving experience. When an actress from “Frasier” is the most recent woman in the grid, is it even worth it to go through the woman/man ratio this week? There are so many ancient goddesses or prophetesses in this grid, and many more men than women (as usual). I wish I liked this puzzle more than I did, but meh. 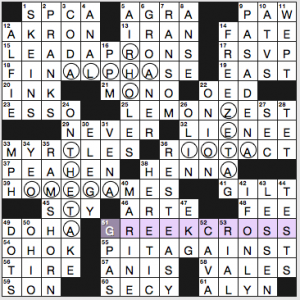 The theme involves Greek letters, whose names are spelled out and intersect to tie to the revealer: 51a. [Religious symbol resembling a plus sign … or a hint to the three groups of circled squares in this puzzle], GREEK CROSS. We’ve got ALPHA and RHO (in circles) within FINAL PHASE and AIR HOLES; IOTA and ZETA in RIOT ACT and FREEZE TAG (this is a great pairing); and OMEGA and THETA in HOME GAMES and ON THE TAKE. I suspect some of these phrases have appeared in previous hidden-Greek-letter puzzles, but probably not with that GREEK CROSS angle. Neat theme.

With seven themers locking down a lot of grid real estate, though, there was an awful lot of clunky fill that would be likely to stymie a new crossword solver. SPCA right at 1-Across, ESSO, LIENEE, foreign ARTE, foreign ANIS, less common VALES, Kirk ALYN, Navy abbreviation YEO (yeow!), and crosswordese fictional character ANSE. Can’t help thinking none of these entries belong in a Tuesday puzzle. 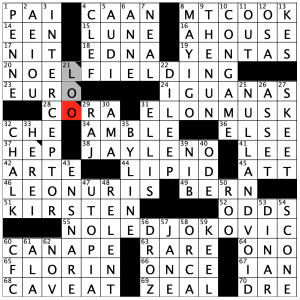 I often wonder how Matt comes up with theme after theme, and this one is actually quite clever. We have five (!) names that all use the same four letters. Take a look:

The letters E, L, N and O are common enough, that’s for sure, but I thought this was quite a find. Yes, only one is a surname, but that doesn’t seem to distract from what this theme is trying to show. I am slightly surprised Matt didn’t shoehorn the LONE Ranger in this grid, but that likely wouldn’t have worked in the course of construction! Again, I liked this a lot. I made an error or two in the grid, but I don’t feel well as this week starts, so it’s off for more Mucinex later today. 4.6 stars for this one. 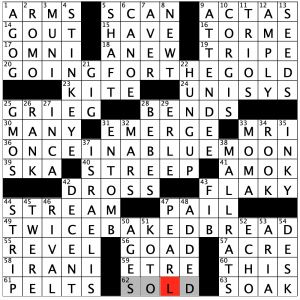 I had to look back to see what the theme was, even though I did see the revealer answer quite clearly! I am not feeling the greatest, so maybe that is the issue! Here are the theme entries:

I don’t go to auctions much. OK, I don’t EVER go, but I have seen enough of these on TV and movies to understand what is happening. Maybe I should go to an estate auction someday, but I am not a garage sale fan, and I don’t see how this is much different! Clever theme today by Robert Fisher, which is a byline I don’t recognize, but this is a fine Tuesday puzzle. 4.2 stars today.