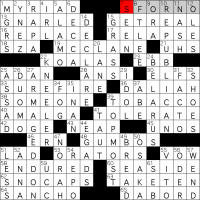 hello and welcome to episode #590 of matt gaffney’s weekly crossword contest. it’s week 3 of guest constructor month, and we have adam simon levine with a puzzle called “Flights of Fancy”. (i’m thinking he and pete wentz—also in north carolina’s research triangle, i think—should team up to front a crossword rock band.) the instructions this week tell us that we’re looking for a six-letter entry with no connection. what does this mean? well, let’s take a look at the six-letter entries, all of which are acrosses:

okay, so there are some pretty forced/unfamiliar six-letter entries in this set. what do we do now? well, the title and instructions certainly suggest air travel, so i started looking up airport codes. yes, there was a fair amount of googling involved. some of these airports are quite familiar: in particular, one airport in each theme answer was quite famous (IAD, SFO, LAS, IAH, LGA, BOS, SAN, ORD) and the other was rather less famous. let’s take a look:

which of these has “no connection”? some of the airports are quite far from each other, and others are quite close, but only one pair has direct flight service: SFO-RNO, so that’s what i submitted. i was surprised as you to find there was no DAL-IAH flight. you can fly nonstop from dallas to houston, but only out of DFW, not love field.

there was apparently some consternation about how to interpret the “no connection” instruction. guam and boston are very, very far apart (nearly antipodal, in fact), and if you wanted to fly from one to the other, not only is there no direct flight, there’s not even a one-stop itinerary (at least not that i can find on google). that it seems to me a valid interpretation of “no connection”, so i think GUMBOS should also qualify as a correct answer. it’s a thorny issue, though. in retrospect, a more unambiguous instruction statement could have really clarified the issue.

having said that, the theme mechanism is not my favorite. solving it involves one aha and a whole lot of googling, and it also subjected us to obscure theme answers like SFORNO and AMALGA (population 488!). i don’t think the payoff was worth it.

This entry was posted in Contests and tagged Adam Simon Levine. Bookmark the permalink.