We’re given quite the challenge in this weekend-sized grid. The main theme answers are only the beginning. They tell us to: FIND THE NAMES OF TEN GEMS / HIDDEN WITHIN THE PUZZLE / GRID IN WORD-SEARCH STYLE. 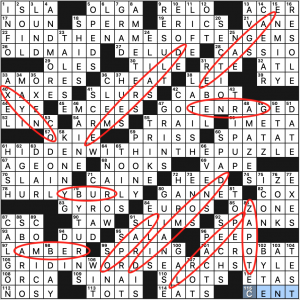 Now be honest. How many of you actually sat down and looked for them? I, for one, would not have, if I didn’t have to write this post. It took me over twice as long to find the dang gems than to solve the actual puzzle.

Part of the problem is that when you look up lists of types of gemstones, not everyone has the same items on their list. Who knew it was so complicated.

But for you, dear reader, here is the list of gems that I found: AGATE, EMERALD, ONYX, GARNET, RUBY, AMBER, OPAL, DIAMOND, PEARL, and TOPAZ.

Despite my lack of interest in finding the words, I’m thoroughly impressed at the construction here. Making a normal 21x grid is hard enough, but having to hide all those words…I don’t even want to think about it.

A couple of entries are iffy (I’m looking at GOT ENRAGED and LAMBER specifically), but since they’re hiding two of the gems, I’ll give them a pass. Conversely, ZAPOTEC hiding TOPAZ is a really nice find, and HURLY BURLY makes for great fill regardless.

Since I spent so much of my blogging time looking for the gems, I’m going to cut this short. While the word-search part of this puzzle wasn’t my cup of tea, I still think this was a very impressive grid. Four stars. 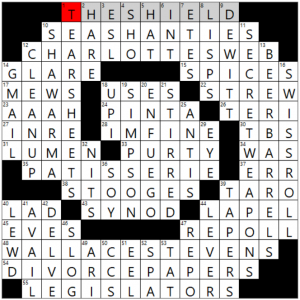 Alex Eaton-Salners is a mystery to me — he won the Orca for Constructor of the Year last year, which I can’t say was surprising since, like Henry Hook or Erik Agard, every crossword he writes is interesting in some unique way. I assume he really exists, but haven’t read an article about him or met him in person, so until shown otherwise I’ll posit that he’s an actual human being and not some Stanford grad student’s AI project.

This puzzle is interesting as well. We’ve seen seashell-like grid patterns before, and SWISS ROLL here 16d. [Sweet treat depicted in this puzzle’s grid] is the rationale behind the swirl. But the quality of the entries in this themeless makes it stand out: CHARLOTTE’S WEB is [Children’s classic with the line “It is not often that someone comes along who is a true friend and a good writer”], [Union busters?] is DIVORCE PAPERS, and [Street food prepared on a rotisserie] is [SHAWARMA]. The clue there made me realize that ROTISSERIE at 35-A was wrong [Place to buy a 16-Down]. I had ???ISSERIE and didn’t bother to look at the 16-D clue since it had to be ROTISSERIE, except that it was PATISSERIE. Don’t buy a Swiss roll from a rotisserie, folks.

Grids with lots of circumscribed sections like this one run the risk of having stagnant areas but that didn’t happen here. There’s no section that’s not interesting; take the center, with EN FUEGO, STOOGES, I’M FINE, SIMPSON, and PURTY.

4.44 stars. I thought it was excellent, but if his name anagrams into something showing that he doesn’t really exist then I’ll lower the rating. 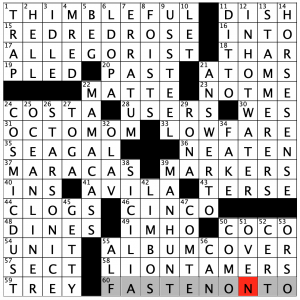 I might need a vacation! This is one of a few Saturday LAT puzzles for me recently that took a little longer than normal. I enjoy Ed Sessa puzzles, and he is one of a few constructors that I don’t think I have ever met but would like to. Perhaps one day! Another nice puzzle from Ed here; looking forward to hopefully many more from him! 4.3 stars.

My next LAT review is Tuesday. See you then! 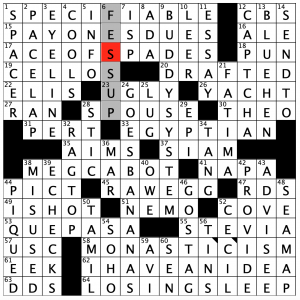 Not a bad time for a Stumper; maybe I am getting used to Matthew Sewell creations. I got this one done in under 15 minutes, and for a Stumper that is a triumph! Usually I seem to learn a new word or two when I solve these, or at least hear something I may have learned decades ago, but just about everything hear was fairly familiar, so that means next week may be a bear! 4.4 stars today.

From the concept, to the title, to the fill, to the cluing, this was an outstanding puzzle. One thing wrong: It requires circles to fully enjoy. It’s ironic that the syndicate that uses circles-to-properly-enjoy themes more than anyone (that’s how it feels anyway) is a publisher that can’t figure out how to include circles in its puzzles. That, in and of itself, is puzzling.

THEME: Phrases that have words that mean “zero” are broken in the grid.

Really liked how these phrases were split, especially the first two. Those are both words that stand alone. The third is an outlier as IT’S ALL is a partial without something attached. And the split is broken differently. And LOVE does not universally represent ZERO as well as the others since it’s solely in a tennis context. But still, this was a great puzzle.

But… ya’ know… the circles thing. That Universal can’t do. And yes, people who are constant solvers won’t be bothered by the weird instructions in the clues (or in this case the bizarre lack of instructions! How is anyone who is new to solving going to see LOVE without a nudge when NADA and NONE are both closer to the definition of zero and they’re presented differently?!?). But I have seen first hand… many times… novice solvers attempting a Universal puzzle that should require circles and being off-put by them.

I’ll just keep posting this plea- I think it’s like 5 or 6 times in the last two weeks (and I missed a couple):

4.5 Star puzzle earns 2 Stars for Universal’s lack of circle inclusion. Why are you pushing away new solvers, Universal?