I really enjoyed this puzzle. My only complaint is that it went by too fast, which surprised me since there were two long answers that were completely new to me.

First I have to register my VIGOROUS disagreement with 8d, [Hobbes, for one]. Hobbes is NOT an IMAGINARY FRIEND. Hobbes is very real. Just because the other people in Calvin’s world lack the imagination or empathy or wisdom to realize it doesn’t mean he’s not real. Harrumph.

I do vaguely remember reading or hearing about COCKALEEKIE SOUP. I had no idea how to spell it and certainly didn’t know it was garnished with prunes. According to Allrecipes, it’s chicken soup made with leeks, so I guess the “cock” is the chicken. Allrecipes doesn’t mention the prunes, and I don’t think I’ll add them to the chicken soup I’m making for Rosh Hashanah. 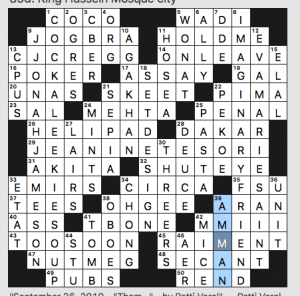 What I didn’t know before I did this puzzle: see above re: Scottish chicken soup. I also hadn’t heard of JEANINE TESORI (I’m so ashamed) and I didn’t know that the airline EL AL is named after a passage in HOSEA. 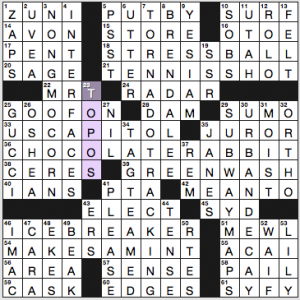 This weekend, I’ll leave the NYT puzzles in the capable hands of Matt and Jenni. For now, I’ve got your Friday puzzle to discuss, a 70-worder. I still need to pack for tomorrow’s road trip (we have an alarm system, don’t get any felonious ideas), so let’s be quick here.

Did not know, despite having majored in English: 23d. [Traditional literary theme or motif], TOPOS. I suspect I’m not alone here.

Unfave fill: PUT BY, OTOE, plural IANS, SSR. That last one is mildly topical, at least, with people asking this week whether its the Ukraine or just Ukraine. It’s the latter—the “the” was used during the Soviet era, when it was the Ukrainian SSR.

THEME: Each theme answer is a phrase of 3-Ds. 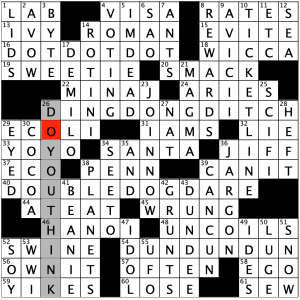 This works as a theme, with all of the answers entertaining and legitimate, but for me the best thing about this puzzle is it’s overall construction.

We have a very low word count, at 72 answers, which is normally what we see for themeless puzzles rather than themed ones. On top of that the only Ds in the puzzle were the ones found within the theme answers. The fill is really impressive given these constraints.

Favorite among the fill for me was DO YOU THINK, JARGON, I’M DEAD, and JOIN NOW – but really every area of the puzzle had something interesting to find. Some nice adjacent words today with things like VISA next to RATES and LUGE beside SNOW. Great clue for DE MILO [Venus statue’s missing parts?].

In things that will give away my age – I refuse to accept [Solar system octet] as the clue for PLANETS, because Pluto will always be a planet to me – but the puzzle is forgiven for its YOYO clue [Toy with an “Elevator” trick]. 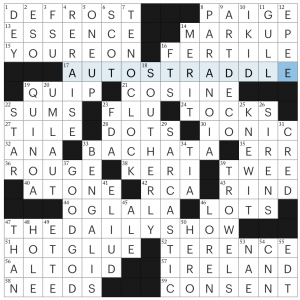 Well, it took a few weeks, but I finally got an UMLAUT in my New Yorker puzzle! (Yes yes I know I was wrong and it’s actually a diaeresis). This puzzle from Erik Agard was delightfully crunchy, with some marquee entry/clue pairs that I adored, and a few proper names that I struggled with, making this slightly harder than previous Friday New Yorkers (which, as we’ve discussed, are usually easier than the Mondays).

I was *thrilled* to see AUTOSTRADDLE in the grid; if you’re not familiar with the site, it’s an independent, reader-supported online community for queer women. I’ve been reading AUTOSTRADDLE since college, and seeing it in a crossword puzzle just brought so much joy to my queer little heart.

I also loved the clue on THE DAILY SHOW, which is obviously better known than an indie website, but which was clued to highlight the contributions of the hilarious Jaboukie Young-White. His twitter presence makes Twitter feel less like a hellscape.

Erik’s focus on recognizing and uplifting the work of people that don’t often get included in puzzles, exemplified by this marquee pair, really elevates his puzzles for me.

Overall, loved this puzzle, despite the tricky stuff.

If the constructor’s name followed the theme rules, it would be David Alfred Bywaterz. Each theme answer has an S replaced by a Z. Wackiness results. 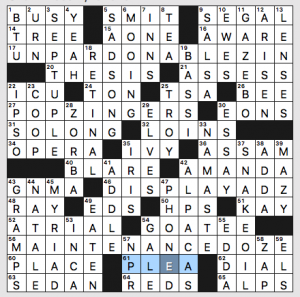 Aside from my consternation about the clue for 56a, I like this theme a lot.

What I didn’t know before I did this puzzle: that Nikos Kazantzakis wrote “ZORBA The Greek.” 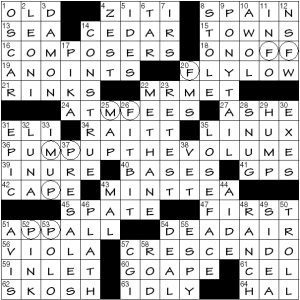 Accordingly, proceeding from the lower left to the upper right we get pp, p, mp, mf, f, ff – pianissimo, piano, mezzo-piano, mezzo-forte, fortissimo. Among those not included in this standard 15×15 grid: the extreme pianississimo and fortississimo. Here’s Wikipedia’s section on dynamic markings. While their vectors are obviously correct, I as neither a musician nor a music reader can’t speak to the accuracy or appropriateness of the left-to-right spacing or the bottom-to-top spacing of these notations.

Seems there’s a popular Singaporean musical/drama television program called Crescendo. Just watched a 4-minute version of the theme song with video montage, and to be honest it’s kinda draggy despite including periodic but brief crescendos throughout. So instead of including that in-post, how about a song from the early rock ’n roll band, the Crescendos? No, not the Nashville quintet of the late ’50s, silly! The early ’60s Singapore quartet (natch):

Fine puzzle, but the theme is not exactly in my wheelhouse.