Posted on September 29, 2019 by LauraB
grid: 8ish minutes; meta: about half that 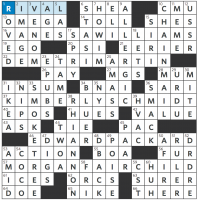 This week, we’re looking for a well-known corporation.

Each personal name corresponds to a corporate name, hinted at in the clue, that is made up of two names:

The added names, in order, are:

… which spells SACHS, the second name in GOLDMAN SACHS, which is a well-known corporation, and our answer. I thought this was pretty clever, and not too tough — and hinged 100% on the happy coincidence that KIMBERLY-CLARK is spelled the same way as KIMBERLY SCHMIDT.

Just when I thought our chance had passed, you go and save the best for last.