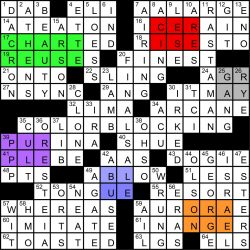 Hello once again, crossword-solving brethren! Hope all is well to begin the new week!

If in the event that you wanted some colorfulness in your solving experience, today’s grid really does take care of that. There are six different parts of the grid where interconnecting circles are joined together and the resulting fill creates, when spelled from the top rung of circles to the bottom rung, a name of a color. The middle across entry in the grid, COLOR BLOCKING, acts as the reveal (35A: [Artistic style popularized by Dutch painter Piet Mondrian (and reinterpreted as the puzzle theme)]).

ORESTEIA is not only great fill, but also a reminder that I have yet to read this series of Greek tragedies and hope to be able to do that before the not too distant future (36D: [Aeschylus trilogy]). Definitely know/remember seeing (Grade) AA LARGE for the size of eggs, but it’s been a while since coming across it during my recent months when I’ve gone shopping for them (7A: [Egg size, on a carton]). Had my curiosity peaked at SLING because I had never heard that beverage before until solving today (22A: [Singapore _____ (gin-based cocktail)]). Biggest slowdown of my solve came toward the end, when I put in “roasted” instead of TOASTED and was tangled in that lower left corner for a little bit (62A: [Cooked marshmallows]). Any people on here from Abilene, Tex. who were/are hoping that ACU will reference Abilene Christian University one day in a crossword (34D: [Prefix for “puncture” or “pressure”])? Maybe one day! Maybe it has already happened and I don’t know of it yet.

“Sports will make you smarter” moment of the day: GEORGE (45D: [“Cuban Overture” composer Gershwin]) – There are a number of women who are thriving in on-camera roles in sports television, and it is more than fair to say that one of the trail blazers of women in sports television is Phyllis George, the 1971 Miss America Pageant winner and former CBS Sports reporter. In 1975, George joined the cast of The NFL Today, a forerunner for the popular Sunday football pre-game show productions of today, where she mainly performed and conducted 1-on-1 interviews with some of football’s stars of that time. Later on, George became a co-anchor on the CBS Morning News program. 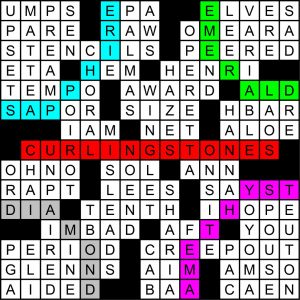 Ross Trudeau has burst onto the scene in the past year or two, writing what feels like a lot of puzzles in a lot of places. I can’t sneak over to XWordInfo.com to check his NYT number since I don’t like to see other reviewers’ reviews before I write mine, but I think it’s more than a few.

We’ll start with the reveal: 36a. [Items guided by brooms in the Winter Olympics … or a hint to this puzzle’s theme], CURLING STONES is the centerpiece of the grid, and there are four gemstones curling through its corners. Clockwise from the upper-left we have a SAPPHIRE, an EMERALD, an AMETHYST, and a DIAMOND. Points for consistency, since each of the four moves as rightward and downward as possible through the grid given its placement.

So that’s a reasonably amusing theme, and just about right for a Tuesday — probably not going to fool anyone with those circles telling you what to do, but still a little trickier than a proper Monday. I guess Will couldn’t have held it until 2022 for the next Winter Olympics, but saving it for the dead of this winter was probably worth doing. I know I don’t get into curling mode until mid-December at the earliest, and you’re probably in the same boat.

Accommodating diagonal letters in anything but very small quantities is usually a hellish task, so let’s see how he did here — and note that there are 14 diagonally placed letters, which is a lot, and that they’re scattered all over, and that there are 16 other theme entry squares making up the gemstones, and that there’s a 13-letter central reveal to boot. So this is a tough challenge he’s set himself; keeping with the Winter Olympics theme, I think this is like landing a triple-axel. Or maybe a salchow. Not sure.

Giving it the Five-Worst-Entries test we have ALD, H-BAR, I AM / AM SO / I’M BAD dupe-a-palooza, EMEND that wishes it were AMEND, and SAPOR. Considering the task at hand, that’s a reasonable worst list. Now let’s go the other way and see if he could work any nice fill in with all those constraints: YO-YO MA, OPERETTA, VARIABLE, POIROT, and CREEP OUT. That’s not a killer Top 5 list for a regular 15×15, but considering what he was up against themewise it’s fine, and bonus points for sneaking that Z in there amid heavy traffic.

Our constructor is “Getting the Last Laugh” in today’s Tuesday WSJ: 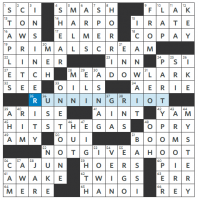 19A: PRIMAL SCREAM [Release of intense anger in a therapy session]
28A: MEADOWLARK [Yellow-breasted songbird]
35A: RUNNING RIOT [Unconstrained]
45A: HIT THE GAS [Floors it]
52A: NOT GIVE A HOOT [Be completely apathetic]

Each of our themers today ends with a synonym for laugh: scream, lark, riot, gas, hoot. Not bad at all for a consistent theme with a lot of theme real estate used in the grid! I also appreciate that each of the laugh-related words is used in a different way in the theme entries themselves.

Other random thoughts:
– Not many women in today’s grid, so yay to AMY Poehler, REY from “Star Wars,” and Venus de Milo for making it in. GIA Scala feels like an outdated reference, so I’m hesitant to include her, but I have to take what I can get, I reckon. Also, many other bits of fill could have been clued via women, but HARPO being clued via Oprah seems to me to be the most obvious.
– Not much else to say about the fill, except that it’s clean, straightforward, and not stodgy. It made for a quick, enjoyable solve!

Matt Jones’s Jonesin’ Crossword, “This or That?” – Derek’s write-up 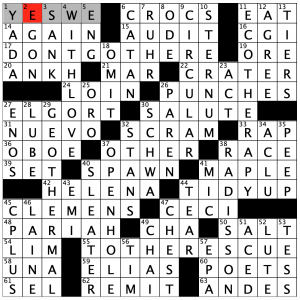 I was wondering what the theme was for the first half of this puzzle, but the revealer in the middle of the grid helped a lot!

So we have the word “other”hidden in several phrases. Not too complicated, but still clever enough that I had to think a bit. It did make the last two themers toward the end a lot easier, though! 4.3 stars this week

So there was a lot I liked! Another Jonesin’ next week! 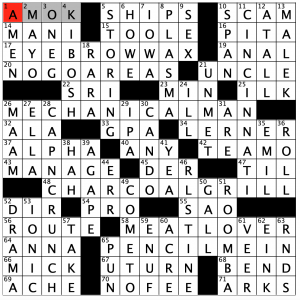 A new constructor name! At least to this database. If this is a debut puzzle, congratulations!

Is it eye pencil or eyebrow pencil? I don’t do makeup that often! I DO have tons of mechanical pencils, and I have used charcoal pencils once or twice for some sketching. I think the crossword crowd, whether artistically minded or not, is quite attuned to the different types of writing implements, probably more so than some other groups of people. At least that is my perception. But as mentioned, congrats on a fine debut if that is the case, and please make many more!

More good stuff from this puzzle: