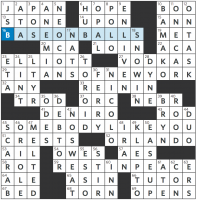 This week, we’re looking for a four-letter noun.

There are four themers, and four letters in the answer, so it’s likely we’ll get one letter generated from each themers. As is usual when the themers don’t have any referential meaning in common, we’re likely looking for a letter pattern. In this case, since each themer is a 3+-word phrase, I guessed correctly that the letter pattern might come from the starting letters in each phrase’s words, like so:

Hmmm, we got some guys’ names, and the title is “Leading Men,” so likely we’re looking for some famous people with those first names. And right up there at the center-top of the grid (what some crosswordy-minded folks might call the grid’s “north”), is HOPE. There’s a famous guy named BOB HOPE, right? What else can we find?

BOB == [6a: Optimistic desire]: HOPE. Performer, singer, actor, etc. who defined mid-20th-century middlebrow entertainment.
TONY == [52a: Magic location]: ORLANDO. Singer most famous for “Tie a Yellow Ribbon” with the band Tony Orlando and Dawn.
SLY == [13a: Sculpting medium]: STONE. Funk-soul-psychedelic rocker known for many awesome songs with Sly and the Family Stone, including “Everyday People.”
RIP == [68a: Of two minds]: TORN. Legendary actor Rip Torn died this past July at the age of 88.

The first letters of those entries spell out HOST, which is a four-letter noun and our answer. At least one of those Leading Men has been a HOST, Bob Hope most famously, having hosted the Oscars multiple times. Tony Orlando had a career as a Vegas emcee/HOST in the 1970s and he now is a fixture in the theaters of Branson, Missouri. It’s not clear if Sly Stone has done much as a HOST; seems like he has in fact struggled a bit since the 1980s but has had some success in tribute and reunion concerts with other funk legends. Rip Torn wasn’t necessarily a HOST that often but he did play Artie on The Larry Sanders Show, which starred Garry Shandling as a talk-show host. This played about 1.5 metaweeks on the Gaffney Scale for me; how about for SOMEBODY LIKE YOU?

Note: “Somebody Like You” has also been a song title for the likes of .38 Special, Lil’ Tweety, Marshall Crenshaw, Atomic Kitten, and the feathered-hair synth-pop god of the 80s, Daryl Hall (sans John Oates):