Chris Adams maintains his own puzzle website, so if you like this puzzle, have a look over there for a treasure trove of other grids, including many of unusual shape and size.

For this one, you have to go about things the WRONG WAY (64a , [Sign of misdirection, and a hint to this puzzle’s circled letters]), to achieve puzzle success. Each theme answer contains the letters W, A, and Y in an alternate order.

Ironically, this is fairly straightforward as far as puzzle themes go, but the choice of theme answers make for a strong set. 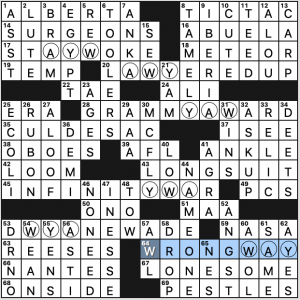 Elegantly, each of the six permutations is on display here. The nitpicker in me wanted them in alphabetical order, but that’s not possible when WAY has to be in the revealer at the end.

How about those stacked corners, especially the ones up top? ALBERTA on SURGEONS on STAY WOKE is great, but I like TIC-TAC on ABUELA on METEOR on LAWYERED UP even better. The crossings aren’t too costly either though ALOU is on the stale side and TOOLERS [Leather workers] sounds made-up. “NAME ONE,” “NO NEED,” and CUL-DE-SAC are other gems in the fill.

I was happy to see BRAM [“Dracula” author Stoker] as I am currently listening to the Audible performance of it, which is the first time I’ve “read” it since high school. I had completely forgotten that the format of the book was as a series of letters, diary entries, and the like. Of course, my memory has been clouded by various retellings over the years, so it’s good to go back to the original. There were a few meandering sections early in the book, but it still holds up and I find myself thoroughly engaged.

I also got a smile out of MCFLY which I can’t read without hearing in Biff Tannen’s voice as he knocks on young George McFly’s head.

In the new-to-me category, we have LONG SUIT [Forte]. I wanted STRONG SUIT, but the L comes from MCFLY, so it was clearly correct. I had never heard LONG SUIT, but it checks out, though it’s been on the decline as a phrase since the ’80s if Google’s Ngram Viewer is to be believed.

Despite the title, this grid wasn’t filled with misdirection, but the theme entries are strong and the fill equally so. Four stars. 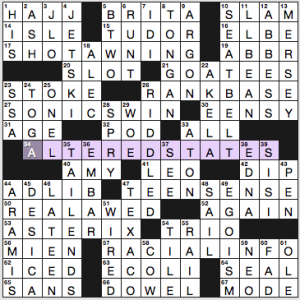 Thanks to pannonica and Matt for covering for me while I was out of town! Now I’m back and … the puzzle that welcomes me home has a kinda klutzy seven-part theme and a bunch of terrible fill that had me making cringe/scowl faces through way too much of the solve. The theme is ALTERED STATES (34a. [1980 sci-fi thriller … or a hint to the answers to the six starred clues]—I am old and I saw this William Hurt movie back in the day, but I’ll bet most solvers under 40 have never seen it), and six state names are anagrammed into made-up phrases:

Anagram themes like this need to be funny, or they need to have some sort of common thread. Weird and awkward phrases that lack any humor are not working for me. And the inclusion of six anagrams crowds the grid, pelting mid-week solvers with ELBE, EENSY, SSA, ONE L, LATEEN, EMBAR, B-TWO (nobody ever spells out the numbers in vitamin names), IDI, and AKELA. I could take maybe two or three of these in one 15×15 grid, but nine is too much and it makes my nose wrinkle up in distaste throughout the solve.

Today in the Crossword Puzzle Collaboration Directory group on Facebook (which is aimed at connecting underrepresented constructors—women, POC, LGBTQ+ folks) with more seasoned mentors and test solvers), a constructor named Nam Jin Yoon described a sort of Bechdel test he uses in his puzzles: Give yourself 1 point for every name in the grid/clues that’s not a straight white male, and subtract 1 point for every straight white man. If he ends up with negative points, he redoes the grid. I love this idea! Let’s apply this test to tonight’s NYT puzzle: +5 for TUDOR clue, AMY, J.LO, unspecified ABBESS, fictional EDNA; +1/–1 wash for TRIO clue; –9 for GOATEES clue, HIS clue, ALEC, TOGA clue, el-SISI (weird census RACIAL INFO from the U.S. decided ages ago that North Africans were to be considered white), fictional ARAMIS, Vittorio DESICA, TEXACO clue, fictional NEO (Keanu’s part Asian and Hawaiian, but was Neo?). We come out at –4. Bzzzzt.

One more thing: 43d. [Hotel room amenity], PEN? Ha. A 40¢ thing left in the desk hardly rises to the level of an “amenity”! Can you imagine? “Oh, wow, this room is really nice! There’s a flush toilet, which is a nice touch, and some curtains on the window, and there’s even a ballpoint pen with the name of the hotel on it. Fancy!”

THEME: The letters M-A-N have been removed from 8 answers in the puzzle 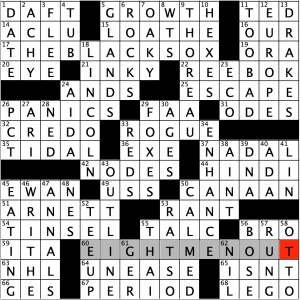 This is a fantastic theme. So much genuine enjoyment in solving this and a great AHA moment when suddenly everything made sense. So well done. I really adored the theme.

As for fill, high word count and tons of shorter theme entries so precisely placed here made for a pretty broken up grid – nothing bad or unenjoyable, but just didn’t feel like there was enough breathing room to really connect all the areas of the puzzle.

A couple of other things – I liked cluing of ARNETT as the voice of Batman so close to LEGO, and great clue for EYE [Visual palindrome]. 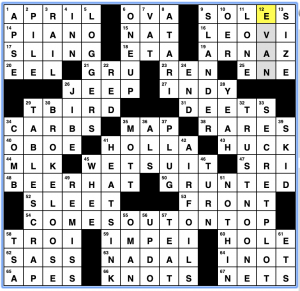 After the clunkiness of solving today’s NYT, I was blown away by the AVCX puzzle today. And it’s a debut! (at least for this site’s coverage)  I could tell something was up with Sid Sivakumar’s grid, but needed everything to be in place to figure out exactly what.

Along the top row of down clues, there are 7 clues that blow past the boundaries of the grid by one letter: 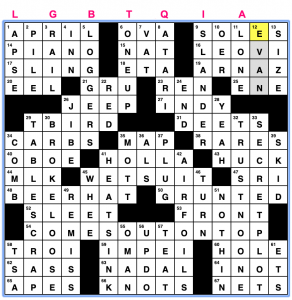 What works so well about this is the way that without these initial letters, the remaining letters in the grid still make sense as words!

This is so well executed, and seeing everything together makes the revealer at 54A, COMES OUT ON TOP (“Emerges victorious … or what this puzzle’s theme does”), all the nicer.  It’s National Coming Out day this Friday, October 11, and this grid is a wonderful way to celebrate that, with LGBTQIA spelled out along the top.

The rest of the fill is remarkably solid and clean, but one (fairly common, crossword-wise) piece of fill and its clue sent me down a good wormhole, so I’ll share that.

OBOE is clued by “Instrument featured in a punnily titled song by comedian Bo Burnham”.  That song would be “Oh, Bo”, off the comedian’s 2011 album “Words Words Words”.  I would have posted that song’s video, but it’s missing the context of Burnham’s comedy (and work as a director on the movie Eighth Grade, which came out last year).  Burnham often gets meta about the way the entertainment industry markets music in his work, and in particular the idea of the parasocial relationship.  Internet commentator and video essayist Shannon Strucci has put putting together a video series on these that uses a lot of Burnham’s work to illustrate her points – episode one is above, and episode two‘s runtime may be daunting (it’s feature film length), but it’s a topic I think is fascinating and hope you do too.

Okay, digression over.  This is a fantastic puzzle, Sid, and it brightened my day.  I look forward to more. 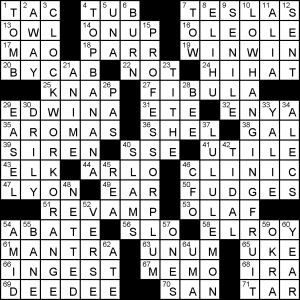 The whole puzzle fell over rather easily, between the simple theme and fairly small-stacked grid.