Spoiler Alert! This review contains spoilers for today’s Fireball puzzle. If you haven’t done that puzzle yet but intend to, I suggest doing that first before coming back here.

Are you kidding me!? This puzzle and today’s Fireball (by Jacob Stulberg) have the exact same theme with the exact same revealer. What a crazy coincidence.

Both use LITTLE ITALY (clued here as [Neighborhood near SoHo, and a hint to three squares in this puzzle]) as the reason for hiding Italian city names, rebus-style, in the theme entries. 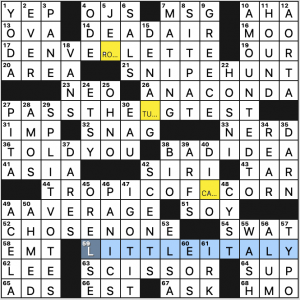 It’ll be hard not to compare the two grids, so why fight it?

This puzzle only gives you three cities whereas the Fireball gives you four. And PASS THE TURING TEST as a phrase is  lesser known than the fun Fireball entries of BREAST IMPLANTS, THUMB A RIDE, and AERO MEXICO. However, in this grid you get longer-lettered cities CAPRI and TURIN (i.e. harder to put in a grid) and they’re more well-known (vs. lesser known COMO and (where?) BARI). Verdict: WSJ.

In the fill, here we have a lot of great entries: DEAD AIR, SNIPE HUNT, ANACONDA, “TOLD YOU!,” “BAD IDEA,” CHOSEN ONE, SIT PAT, SPLIT VOTES, and “I GOT IT!” Over there you get EARPIECE, PRE-ORDER, ALATEEN, “WHERE AM I?,” AFTER ALL, “I DON’T LIE,” ABACUS, and BOOTEE. Both sets are really, really good, but the WSJ entries entries felt just a skosh livelier. Verdict: WSJ.

Cluing? The following Fireball entries had clues that I enjoyed in one way or another (I’m not going to list the clues): DEPP, BREAST IMPLANTS, AAAA, ELEVEN, CENTRE, MANX, BAROMETER. The WSJ had these: ODE, ETSY, TYPO. Verdict: Fireball.

Conclusion: Let me say that both grids are fun and the theme is well-conceived and executed in both cases. I have to give the slight edge to Evan Kalish and the WSJ because I appreciate that the city names are longer and more well-known, and the length and quality of the long fill items were just a cut above (maybe owing to the fact that there are fewer theme entries). I’ll give it 4.25 stars. But the Fireball was very enjoyable as well.

The real winner is us, the solving public, who get to enjoy this fine grids and compare, contrast, and discuss them. So congratulations you! 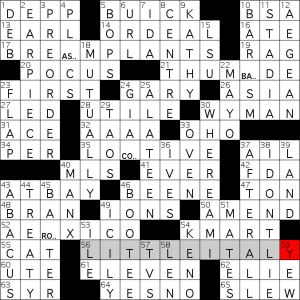 well, jim p has beaten me to the punch, but yes, this puzzle has the same theme as today’s WSJ, with {New York neighborhood (and a hint to this puzzle’s theme)} LITTLE ITALY as the reveal answer. what, indeed, are the odds?

here are the rebus entries:

i liked this puzzle, but boy, did i struggle solving it. the rebus squares were not the problem; i got all of them more or less right away. but i got extremely stuck in the top-middle section, where {Regal, e.g.} was not helping me for BUICK, and {It’s difficult to go through} was not bringing ORDEAL to mind, and then the crossing downs were all ambiguous: {Hits} could be RAPS or POPS or ZAPS or perhaps some other things; {Letterhead info} was URL but could have been TEL; and {Panhandle state: Abbr.} could have been FLA or WVA, but this time it was IDA. yikes. it’s a good thing i learned the name {“Eighteen Wheels and a Dozen Roses” singer Mattea} KATHY from a puzzle earlier this week, or i would have been in even bigger trouble up there.

a few other things:

what a strange world we live in. i feel bad for both evan and jacob, although i kind of wonder if it’s better to have them both come out the same day than to have one puzzle scoop the other by a few days or weeks.

anyway, that’s all i’ve got. what’d you think of this one (these two)? 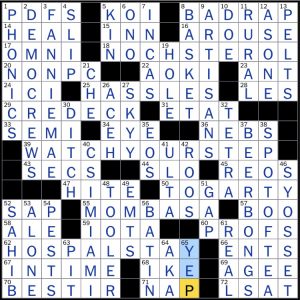 I feel like I’ve seen puzzles like today’s NYT before on Sundays, where there’s lots of grid space to spread out in, but not a 15×15 grid.  The app did a thing I didn’t like, which I’ll get to in a minute, but let’s dig into what’s going on:

Taken on their own, the acrosses don’t make much sense, but the revealer here (“Tread carefully!” … or a hint to four dangers in this puzzle) explains how these fit into the grid.  Each answer contains a pitfall (going down) in the grid – NO CHOLESTEROL, CREDIT CHECK, TOGA PARTY, and HOSPITAL STAY. 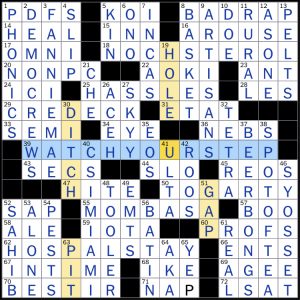 The view from the app on 39A

This is all pretty straightforward, at least given the sort of shenanigans you’d see in a Thursday NYT.  What I didn’t like in the app version of this puzzle is that the four “dangers” were highlighted!  Take a look:

If the clue for these specifically called out the answers affected, I’d be fine with this, but this is the sort of theme where you should be a little stumped as to where the drops are.  Giving those away in this way definitely shaved my time and made this less of a challenge, which I found disappointing.

Here’s a BAD RAP to go along with 8A. Wait, the clue was “Unjustified criticism, in slang”? Never mind, then.

Other things I liked: my initial guess of PDFS for “Acrobat displays” being correct at 1A, PHONICS (“Sound system?”), Etsy ARTISANS, BEER BONGS, and SPOT OF TEA.

Things I didn’t like: NON-PC (especially clued as “Potentially offensive”!  I promise you that you can make a joke without punching down or making it about someone’s body, economic status, or other characteristics, and I honestly think it makes your comedy stronger), Banda ACEH, SYOSSET (which has great letters, but Long Island communities are not in this non-New Yorker’s wheelhouse)

A nice theme, but the reveal of key info and some other fill choices let me down. 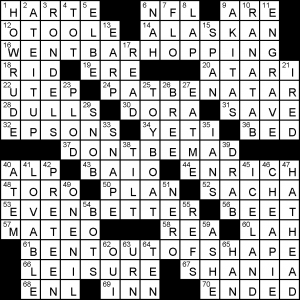 This Thursday’s LA Times features another example of the hidden anagrammed word trope. On the positive side, we have a colourful and clever revealing answer in BENTOUTOFSHAPE. This tells us that the other long answers have BENT which is out of shape (scrambled or anagrammed depending on your preference). Of the four entries, DONTBEMAD and WENTBARHOPPING seem a tad contrived, with DONTBEMAD landing on the good side of the fence for me, but the other answer not so much. Why not just WENTMUSHROOMPICKING…

I don’t see a lot else to remark on: HOWRUDE continues the chatty subtheme. I can’t place the particular BREE [“Grimm” actress Turner]; it feels like a somewhat popular generic Hollywood actor’s name though? I got thrown slightly at [Consequence of wearing a cap too long] as I wanted HATHair. 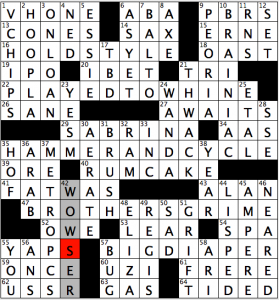 A 14×15 grid today, which I only noticed after pasting it into this blog post. Still plenty of meat on these crossword bones!

Today’s theme is “change a short I sound to a long I sound, to humorous effect.” Let’s see how BEQ did on the “humorous effect” front (I still haven’t seen the across clues yet, so they’ll be fresh to me too!):

I’d say 5/5 on the humor front, with HAMMER AND CYCLE being my favorite clue/answer combo. BIG DIAPER is a real winner too.

The sons and daughters of cartel members give a glimpse into their personal lives as they navigate adulthood and the effects of their family legacies.

I’ll leave it at that. Fun puz!