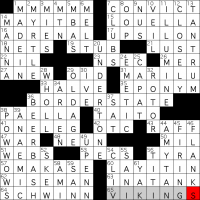 hello and welcome to episode #593 of matt gaffney’s weekly crossword contest, “Union Meeting”. for this week 2 puzzle, matt instructs us that the contest answer is 1 of 50. what does that mean? well, given the title and the fact that the central across answer is {It may touch Sonora or Saskatchewan, say} BORDER STATE, i’m assuming that the answer is one of the 50 states, and he didn’t want to say “state” in the instructions because it’s in the grid. fine.

so, what are the theme answers? well, that’s a very good question. normally we’d look at the longest across answers, but in this grid pattern, there aren’t any other long across answers, and besides, BORDER STATES suggests looking at the borders of the grid. it could just be the top and bottom rows (if we treat the grid as an approximate map of the u.s., then the states that would border canada or mexico are at the top and bottom), or it could be all four borders of the grid. but darned if i know what to do with them. the last across answer, {They beat the Giants last Sunday} VIKINGS, certainly suggests a border state (minnesota), but it’s the only one.

several other observations, in no particular order:

i really don’t know what to look at next, and i’m pretty bummed because this is only a week 2, but i have to admit that looking at these letter clusters is pretty unsatisfying so far. i’m just going to punt this week and hope that MINNESOTA is itself somehow the answer. blergh.