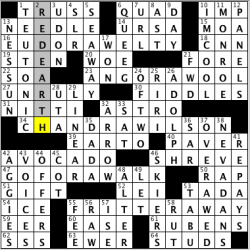 Welcome to the ides of October! Here is hoping you all are doing very well today!

Today’s grid is delivered to you RAW, as each of the five theme entries contains those three letters in a row right in the middle of the entry. To boot, those letters appear as an entry which reveals the theme (56D: [___ in the middle (like this puzzle’s theme!)]).

The northwest part of the grid was the last to go down, especially with an entry that was unfamiliar to me, RED EARTH, crossword two of the theme entries that also were unfamiliar (2D: [Skin care brand that makes detoxifying clay masks]). At least I was familiar with another beauty product that featured today in TABU (53D: [“Forbidden Fragrance” by Dana]). Along with Eudora Welty, the crossword also introduced me to SHREVE, and will have to look her works up as well (46A: [“The Pilot’s Wife” author Anita ____]). I’m probably one of the few people you know that is not a fan of AVOCADOs (42A: [Guacamole base]). Can’t put my finger on it, but it just never did anything for me when tasting it and seeing it as a spread. I’m sure there are some similar fruits that I would like instead, but haven’t yet come across them. (Well, I’d have to look for them first.)

“Sports will make you smarter” moment of the day: ASTRO (32A: [George Jetson’s dog]) – Did you know that “ASTROs” was not the original nickname of the Houston Major League Baseball franchise that’s currently playing in the American League Championship Series against the New York Yankees? In 1962, when the franchise came into existence, it was known as the Houston Colt .45s, named after the revolver. It was in 1965, the same year the team moved into the Houston Astrodome,  that the franchise adopted the nickname “Astros.” On a personal note, I became a Houston Astros fan in 1986 and have been a supporter ever since. (Yes, that means I was in New York City as the Mets were beating the Astros in the NLCS and Boston in the World Series yet decided to be one of the few people in NYC not rooting for the Mets. Weird, I know.) 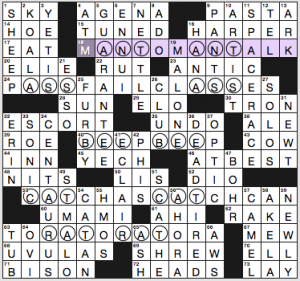 The theme in this 16×15 puzzle is a bit uneven. The revealer is 13d. [Holder of the contents of the circled squares?], ARK, and there are five phrases that contain a pair of hidden 3-letter animals:

The theme is muddled terribly by the inclusion of a bunch of single animals in the grid. These are not part of the Noah’s ark story! They’ve got to be in pairs. COW, AHI not clued as [Animal …], BISON, SHREW, SHEEP, KOALA, “tiger” in the ESSO clue (and ESSO appearing at all in a Tuesday puzzle isn’t good), “Elks” in CLUB clue, NEWT, SONIC the Hedgehog, “horse” in the I-sure-didn’t-know-this CENTAURUS clue, CAMEL, “wolf” in the AKELA clue, “puppy” in the AWS clue (and plural interjections are best avoided as fill). You know what happens when you jam in a bunch of “bonus” thematic material? The fill suffers. Tell me what newbie solvers will know these (along with ESSO and CENTAURUS: 4a. [Old rocket stage], AGENA, and 49d. [Walled city on the coast of France], ST. MALO. (Change AGENA to AGENT above RUNES, crossing ARM and General TSO, and you’ve ditched the terrible AGENA. Why the constructor or the editors didn’t do this, I cannot explain.)

There are also at least five entries that happen to contain ANT or CAT within them, which was another detraction from the theme.

2.25 stars from me. I think it would have been more enjoyable without the smattering of singleton animals throughout the grid, and maybe with just the 12/15/15/12 themers (dropping the central 8 that forced the 16×15 grid) to gain even more filling flexibility.

Another Universal that— unless you’re solving in Across Lite— asks the solver to count letters. The circles are a great visual aid as you can clearly see the embedded words and make a connection. Asked to count letters and remember the hidden words is an unfair burden on the normal solver who has never heard of Across Lite.

THEME: Based on the title, I’m going to say the theme is words that can be used to describe a quantity of glue are hidden across common phrases. Is that it?

Without a standard revealer, I’m not sure if I made the correct connection between the hidden words. Amounts of glue, right? I’ve heard of a dab of glue. And a bead. Maybe a drop too. Spot of glue? To accompany your spot of tea? Dot of glue?

I simply can’t imagine someone enjoying this puzzle who is solving without the circles. Especially a novice solver. They have to 1) find the hidden words by counting squares as instructed in the clue 2) remember those words 3) make the connection between them, which is not entirely evident to me.

The theme answers as stand-alones are all solid, in-language phrases. With five, there’s not much room in the grid for splashier entries.

I’ll end the post with my “please-include-circles-in-your-normal-puzzles-when-they-are-required” plea. It’s uncanny how many Universal puzzles are run that would be exponentially more accessible and enjoyable if they included the standard circles.

Within about 30 seconds of starting to solve today’s WSJ puzzle, I could tell it was written by a woman. You know why? Because of how many women it included and celebrated in the grid and cluing! This puzzle also felt very fresh, modern, and joyful. It was fun to solve! 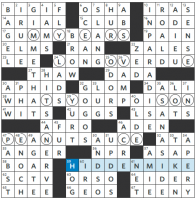 Each of the them entries has the surname of a famous Mike hidden inside. The HIDDEN MIKE in each themer is a nice play on the “Under Surveillance” title. Even though this is a theme designed around men, I really enjoyed it because the theme entries themselves were modern, fun, and playful and there was a range of Mikes represented (even PENCE, who I would normally loathe to see in a grid!).

The theme and the grid feel representative of lots of different types of people and experiences, while also being fresh and modern. We have fun SLANG, BIG IF, UGGS, AFRO (not cringe-ly clued), GIMME THAT, HITS A NERVE, and IN PARADISE. Literally my only negative might be the weirdly heteronormative and dated cluing of DADA, which implies mama as a baby’s first word. But even with that and even with a wildly homophobic VP included as a theme-related Mike, I really really enjoyed this puzzle. My immediate impulse after solving this was to find out any other puzzles Christina Iverson has published and dig into them as fast as I can! 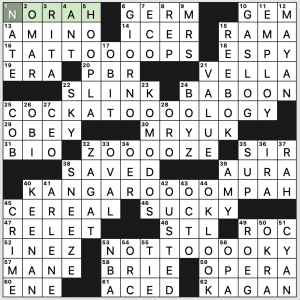 Yup, it must be October! There is a spooky vibe going on here:

Can you think of any other phrases that have four consecutive Os? Yeah, I can’t either! This is a great idea that brought a smile to my face. I think the Addams family clue is a play on a word in their theme song; I won’t link it here so that it won’t be stuck in your head all day, but even just by mentioning it, the damage may already be done! Are we going to have Halloween themed puzzles for the entire month of October? Time will tell! 4.36 stars today! 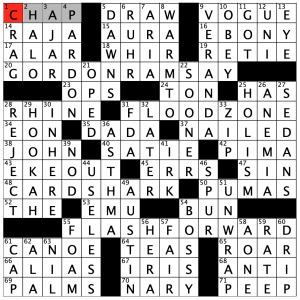 We have another new constructor name that is not in the database! In true LAT fashion, we have some themers and a revealer at the end:

Who hasn’t heard of Flash Gordon, a flash flood, and a flash card! Very nicely done. If this is a debut, congratulations on a very fine one. Keep ’em coming! 4.5 stars for a great puzzle.

Some more stuff I liked: