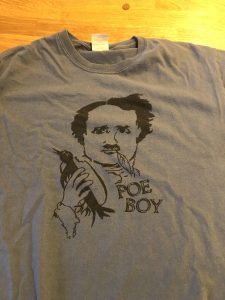 Wore this to school yesterday.

Fourteen solid theme answers with a wonderful consistency in that each is clued as the work of an author. Being quite familiar with Evan’s growing OEUVRE, my suspicion that Edgar Allan Poe’s name was being spelled by the dropped letters was confirmed after I uncovered the first themer. I suppose the cluing in general was eased up in order to accommodate the (understandably) oversized grid, but I flew through it, minutes below my normal WaPo solve time.

Love the idea behind this one. I could be biased. It’s certainly not a new approach for Evan. But I’m a huge Poe fan and am currently knee-deep in teaching The Raven to my high school freshman. Also, glad to see ALLAN spelled correctly. Once, I was at a play in New York (produced by Teller of Penn & Teller) called Play Dead. Labeled boxes lined the stage as if they were filled with memorabilia from authors of the “horror” genre. One was labeled EDGAR ALLEN POE, and the typo distracted me the entire time. 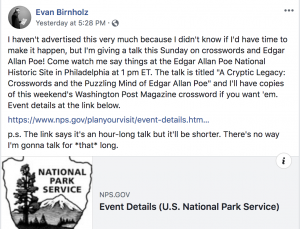 The direct link is HERE. I would love to attend this.

Lots of fun with this one. 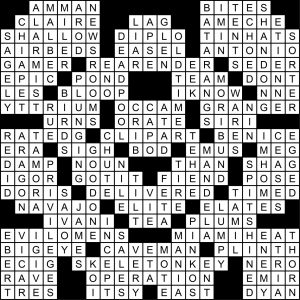 You probably know Natan Last from his book, his freestyle puzzles in the New Yorker, and his many NYT puzzles. In today’s Times puzzle he’s riffing off the classic, super-stressful kids’ game Operation. There’s not really a life on the line, but man, that ZZZZZT! sound would probably still freak me out if I heard it today.

Working backwards from the reveal 110a. [Classic kids’ game involving removal of body parts … with a hint to this puzzle’s theme], OPERATION, we have have nine body parts that you must remove from their answers for the clues to make sense. Note than in each case, the pre-surgery entry is always a cluable word or phrase:

1d. [Top celebs], A-LIST. Remove the ARM from ALARMIST.
10d. [Karaoke selection], SONG. Remove the HAND from SHANDONG. Tough one. My guess was that it was a Chinese place name and that turns out to be correct; it’s a province in the northeast region of the country. But since there’s no clue for the pre-op words and it will not clearly register for many solvers as a thing, he probably should’ve used something more familiar there.
26a. [Melt down, as fat], RENDER. Remove an EAR, Van Gogh-style, from REAR-ENDER.
31d. [Contact electronically], PING. Remove a LUNG from PLUNGING.
33d. [Middle of a diamond], MOUND. Remove a RIB from MORIBUND.
54a. [Golfer’s vehicle], CART. Remove a LIP from CLIP ART.
80a. [Homeowner’s need], DEED. Remove a LIVER from DELIVERED.
72d. [Treated meanly] = SPITED. Remove a SHIN from SPIT-SHINED. Good one. I originally had SPIT AT there and thought, well, I’d say that’s a little stronger than acting meanly to someone.
68d. [Outhouses] = PRIVIES. Remove a LEG from PRIVILEGES.

Note that the crossing entries keep the body parts even after they’ve been removed from the grid. Which is not illogical, since an ARM is only an ARM as part of ALARMIST; the other way, it’s just an A, R, and M.

This is a fun idea, especially for those of us who played this game as a kid. I was wondering if he’d used the actual body parts from the game, but a quick online check reminded me that the parts they used had silly names like “Bread Basket,” “Butterflies in Stomach,” and “Charley Horse.”

So that wasn’t going to happen, but I’m 85%-90% sure that Natan did originally aim for 100% anatomical correctness on the grid, but wasn’t able to quite pull it off (it could be impossible, since it’s asking a lot of the grid). Look how LEG and SHIN mirror each other low, and then your centrally-located single LIVER a bit higher, and then RIB and LUNG at the same high up over that, and then HAND and ARM symmetrically placed as well (imagine the arms outstretched like in Vitruvian Man). So that’s 7 out of 9 placed fittingly, but then it breaks down with the LIP lower than the RIB and LUNG and then the single EAR sitting in the middle like it wants to be a single central thing like a navel or a nose or that LIVER. If there’d been some way to finish this idea off that would’ve been extremely elegant. Or maybe he never tried and it’s just a coincidence that so many are placed correctly, but I don’t think so — the others are too perfect.

Is the grid supposed to resemble the human body in the game? I think that must be the case, since that 3×2 block in the center doesn’t make much sense without it, and there’s a big swath of black squares up top as well that doesn’t look necessary unless there’s some grid art happening. But it’s playing for me like a Magic Eye puzzle that I can’t see no matter how I squint. Your mileage may vary but the Operation body looks like it’d be a tough thing to render in a crossword grid.

4.00 stars. Intricate, nostalgia-evoking, and clever puzzle, ably constructed. I’m not sold on every one of its many aspects but it mostly works well.

THEME: This puzzle asks us to re-imagine “relaxing” phrases as instructions to professionals 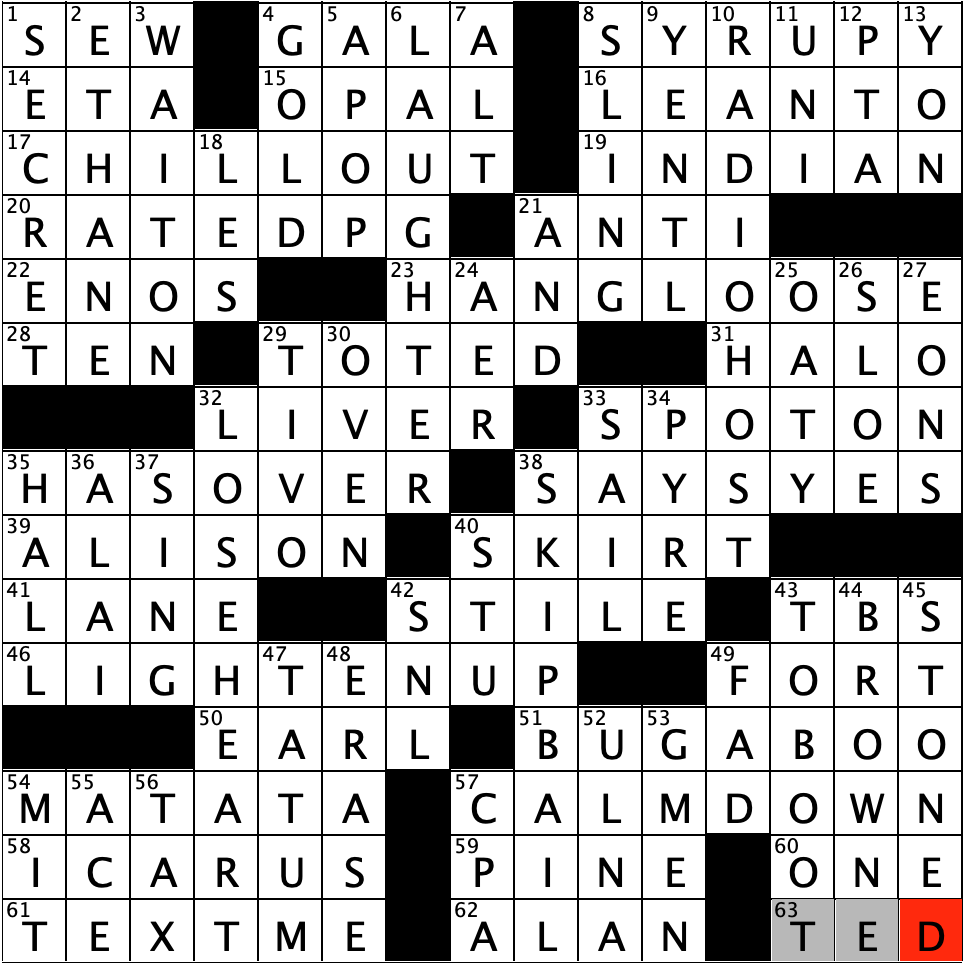 This was a delightful theme. As a woman whose been told to CALM DOWN more than once in her life, this take on these phrases was a lot more fun than I’m used to when hearing things like LIGHTEN UP or CHILL OUT.

Grid was a little broken up, and I felt like there was big break between the second and third themer, but the puzzle itself was easy enough that the break wasn’t too noticeable.

A lot of great bonus fill today. TEXT ME, RADIO HOST, SKIP BAIL, TO BOOT, SPOT ON, SAYS YES, STONED, HAS OVER and LAUGHTER kept even the choppier parts of the puzzle moving and made each area interesting. Really solid construction all around – answers all felt like words and phrases that are currently in use and not an unfair crossing in sight.

Favorite clue for me was UNI [“Corn” or “cycle” starter] – more whimsical than we usually see for that answer.

A ménage à trois is going on in this puzzle. Several of them actually. Steamy, right?

: Three words that work all work with one another as two-word phrases are teamed up, and clued wackily.

I wasn’t entirely sure I’d figured out the theme until I was about halfway through the puzzle. I couldn’t determine what a face card was until I was typing theme answers just now, bag jobs only vaguely rings a bell as a phrase, and I didn’t know the basketball term hand-check. They’re all, of course, completely valid. This was a clever conceit for a puzzle.

Fill was typical fare for a Sunday. The OCELO, MARY J, DENEB area in the NE tripped me up for a while, especially since I was having difficulty filling in JOBS (my mind couldn’t equate “positions” with JOBS at the early hour) in the crossing theme answer. With eight solid theme answers, there isn’t a helluva lot of room for sparkly fill. So I’ll swallow the TYS and the LBOS and enjoy the puzzle anyway.