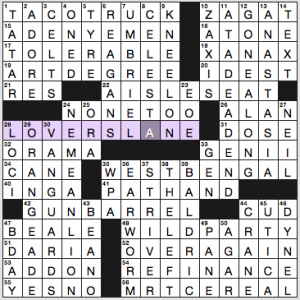 First up, my favorite clue: 28a LOVER’S LANE, misleadingly pitched as a [Sex drive?]. A lane is a drive, all right.

Among my favorite entries here, we have a tasty TACO TRUCK at 1a, ZAGAT/XANAX Scrabbly zone, an ART DEGREE, an AISLE SEAT (clued [C, as in coach?], though on the smaller planes I’ve flown to and from Rochester, Minnesota, seat A is an aisle seat—and a window seat at the same time), short-lived MR. T CEREAL, ORANGEADE (mainly because Canada Dry now sells “ginger ale and orangeade” and “ginger ale and lemonade,” and I was excited about the ADE and ALE clue possibilities this opens up), AT A DEAD END, the NEMEAN LION, EARWORM, and THE LEFT. I assume there have been cryptic clues that work the earworm/earthworm overlap, yes?

Less keen on the flatness of ONE-D (nobody spells that number out, come on), EOE, -ORAMA, and AGAR.

This was fun from start to finish with a theme that delivered over and over again, interesting fill, and fresh cluing. I believe this is Caitlin Reid’s WSJ debut though she’s been busy getting published in plenty of other venues.

The premise is simple: DINNER AND A MOVIE (115a, [Common pairing for an evening out, and a hint to this puzzle’s theme]). Each theme answer is indeed a pairing of a meal and a film, before-and-after style. 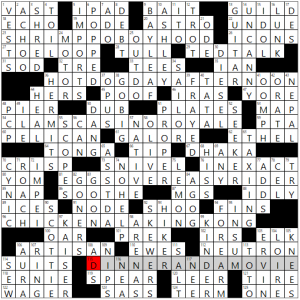 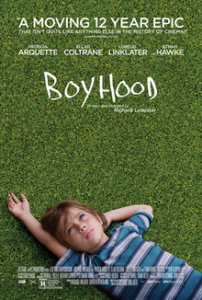 Let me also mention that I love how the clues are written conversationally, thereby making the answers the elements of said conversation, as if they were options listed by some foodie/film buff. And I can equally imagine the date either eating up these options or maybe more probably rolling their eyes at the sheer nerdiness of the exercise. But I, as a fan of words, food, and movies, found this to be fun and imaginative.

And the fun extends to the fill with TOE LOOP, TED TALK, ARTISAN, NEUTRON, BAY LEAF, HERMITS, SCOTTIE, KAISER, SKEWERS, FOREARM, PELICAN, GALORE, SNIVEL, GO BIG, NO HELP. You know, there’s nothing so sparkly there, but almost all the mid-length fill is solid-to-good stuff.  The one thing I didn’t know was DHAKA [Capital of Bangladesh], but I’m happy to learn it.

And the cluing felt right on target to me. Some of it was crunchy in a good way, making me think about it, then giving me the satisfying a-ha. Take for example [Flies, e.g.]. Seems like it’s going to be BUGS, right? Nope. It’s BAIT. Nice. MODE for [Fashion] is similarly tricksy but good. And on and on.

Fave clue has gotta be [Perch parts] which, for the life of me, I thought was referring to birds’ resting places. Nope. The answer is FINS. Love it! [Get into the pool] for WAGER is another goodie. Ooh, and I just grokked [It’s sought by a collector]. I thought it was going to be some variation of the word “set”. Nope, it’s DEBT. Very good.

Making a 21x is tough. Making a fun and smooth 21x is tougher still. This one ticks all the boxes for me, making it my favorite 21x in quite a while. 4.5 stars. 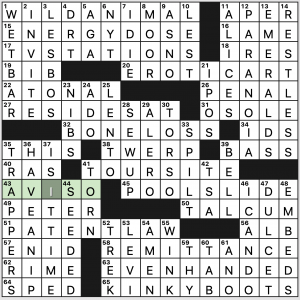 I always enjoy Jeffrey Wechsler’s puzzles, and this one is no exception. Nothing too difficult in this themeless at all, which is more of a compliment to Jeffrey’s constructing skills as much as anything else! This one didn’t take long at all for me. I am using Black Ink on my Mac to solve now, and I am getting used to it. The best part: it doesn’t show all my error marks! 4.5 stars for this week’s LAT.

Puzzle Boat 6 comes out today, so there goes the next three months of my life!! 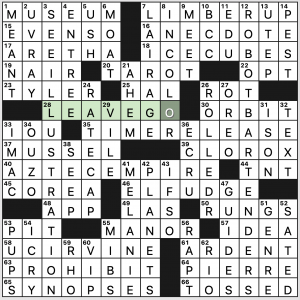 I cannot use Across Lite on my Mac anymore since I upgraded to MacOS Catalina, so I have been using Black Ink. Yes, I paid the full $20 or so several months ago for it. It has some things I like, such as you can tab past filled entries in a similar manner to the NYT app, but when you close and reopen a puzzle the timer automatically resets. To make a long story short, I don’t remember what my time was on this puzzle, but it was fully in the 20 minute range. Some parts of this I found extremely difficult, but we got through it! I’ve said it before and I will say it again: Greg Johnson’s puzzles are quite enjoyable. 4.6 stars for this masterpiece!