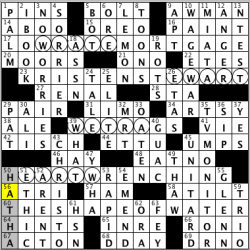 Good day, everybody! The chill is definitely in the air in most places across the country, and here is hoping all of the crossword puzzle solving is keeping you a little warm during these chilly days!

Water is prevalent in today’s grid, with the first four theme entries featuring circles that, when filled in, are anagrams of the word “water.” The fifth theme entry, THE SHAPE OF WATER, acts as the reveal (60A: [Guillermo del Toro’s Oscar-winning film of 2017…and a fitting puzzle title]). A good friend of mine told me a little while back that she loved the movie, but I never got a chance to see it since I rarely head to the movie theater.

Can’t say that there were entirely NO WORRIES when tackling the grid (3D: [“That’s all right”]). Ran into a spot of bother at the end of my solve with the intersection of HATHA (50D: [___ yoga]) and ATRI (56A: [Longfellow’s “The Bell of ___”]). I’m pretty sure the latter was fill that I have entered in a crossword before and the former being a term that I probably have heard in passing once or twice, but couldn’t make things click with those two quickly when solving. CHRISTO also could have caused an issue, but had enough of its crossings filled to take a confident guess on that one (43D: [“The Gates” artist known for his “wrapping” style]). Loved the clue for TV MONITOR, and that’s not just because of my broadcast journalism background (35D: [The FCC?]). Interestingly enough, I am writing this blog on my old 2008 Apple MacBook (my trusted MacBook Air is in the shop at the moment), the model that came immediately after the IBOOK was discontinued (2D: [Old Apple laptop]). Probably thought about turning this MacBook in/selling it for about five years now, but just kept it around in case of emergency…an emergency that ended up emerging last month. Don’t you love it when a decision to keep something around, even if you really want to get rid of it, comes back to be a prudent decision?

“Sports will make you smarter” moment of the day: LEMON (7D: [Yellow fruit]) – Baseball Hall of Famer Bob Lemon was instrumental in the Cleveland Indians’ last World Series title back in 1948, winning Game 2 and the series-clinching Game 6 of the series against the Boston Braves. Lemon made the All-Star Game seven times and led the American League in wins in 1950 (also led the league in strikeouts), 1954 and 1955. Lemon also managed in the Majors, leading the New York Yankees to the 1978 World Series title after Billy Martin was fired earlier in the season. Lemon was inducted into the Hall of Fame in 1976. 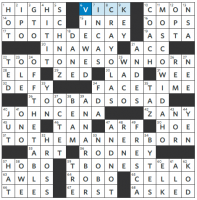 17A: TOOTH DECAY [Dental problem (illustrated by this puzzle’s long Across answers)]
22A: TOOT ONES OWN HORN [Brag]
36A: TOO BAD SO SAD [“Tough turkey!”]
51A: TO THE MANNER BORN [Naturally suited]
59A: T BONE STEAK [Porterhouse kin]

As soon as I got to 6A [Quarterback Michael] VICK, I wanted to stop solving this puzzle. Truthfully, I only finished it because I needed to post a review for this puzzle here. To include him in the puzzle so innocuously, especially after such a highly publicized and well documented history of cruel, vicious dog fighting seems irresponsible at best. If there’s no other way to clue VICK than this, regrid that section of the puzzle. “Character Floss” seems like an apropos title for this puzzle for a few reasons.

Oh, the theme. The word TOOTH slowly decays by losing a letter with each successive theme entry. It’s a shame about 6A because the them is well done and takes up a lot of grid real estate without making the fill suffer that much.

We have a debut here, so congratulations are in order. Congrats, Saul!

There have been numerous puzzles over the years riffing on famous peoples’ last names and what sort of occupation they would or wouldn’t be suited to. (Cruciverb lists at least three Sunday-sized grids that I could find.) So this isn’t exactly groundbreaking stuff, but there is one key difference in this grid, and that is that each last name is also a present-tense verb. That’s a nice touch of consistency. Also, at least one name here is a NYT debut (SEAN COMBS). 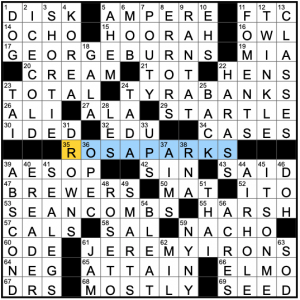 Two women, three men. Two caucasians, three persons of color. It’s nice to see some variety of representation. No Guamanians though. But then, we have last names like Peredo or Gumataotao or Babauta. Oh yeah, and none of us is famous.

The fill is strong with this one with entries like ICE COLD, HOORAH, FOMENTS, TWINKLE, STARTLE, BREWERS, ABSCOND, SEA LEGS, AIR HOLE, and “IT’S ON ME.” It’s tough to have that much good fill when you have a 9-letter central entry effectively bisecting the grid and creating big, hard-to-fill corners. But by and large the fill is impressively smooth, IDED and EHS notwithstanding. Kudos on that!

But as a vertically-challenged 5-5er, I’m none too keen on SHORTIE [Nickname for someone under five feet]. At least I made the cut. But I’m surprised the NYT is including a clue here that I (and I presume others) would consider pejorative. And who spells it with an -IE? Isn’t there some other avenue of cluing for this word with this spelling? Perhaps a brand name or something? I think the best solution would be a slight re-tooling of that section. 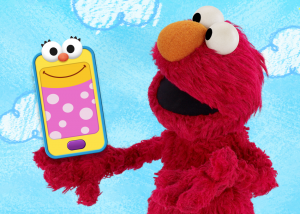 One other clue of note: I haven’t kept up with Sesame Street since my daughter outgrew it, so had no idea that there was a [Muppet with a smartphone friend named Smartie]. This turns out to be ELMO who is purported to be about 3.5 years old, a little young to be owning a smartphone, don’t ya think? 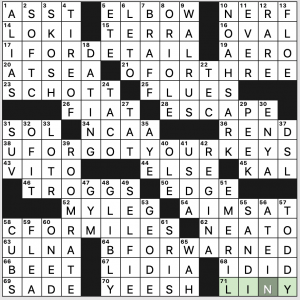 This Black Ink software is turning me into a faster solver! I got this solved in under 4 minutes, which is fast for a Jonesin’. You know how some letters sound like words? That is part of the gimmick this week:

Note how the first letter is capitalized in the second part of each clue? I think the second clue is kind of treating the first letter as a synonym of the word after “for.” Or pointing out that initial? I am not explaining it well, but I hope that makes sense. Still a fun puzzle, and not too hard. 4.3 stars.

Another Jonesin’ coming next week! Winter is coming … 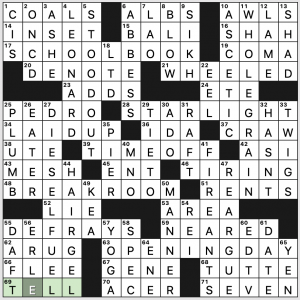 Speed! Sprinted through this one. Maybe I will keep using Black Ink as it helps my solving times! If only I could use it at the ACPT! The theme this week is not easy to figure out, which is why there is a revealer:

The customary LAT revealer lets us know that each themer word can follow day. Some of these are a little less used (day book? day room?), but most should be readily familiar to all (daylight, day break). It all works for me! 4.3 stars.