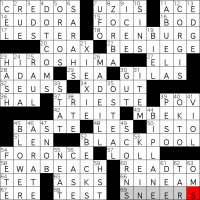 hello and welcome to episode #594 of matt gaffney’s weekly crossword contest, “A Tale of Ten Cities”. for this week 3 puzzle, matt instructs us that the contest answer is an ancient city. okay. what are the theme answers?

okay, so those are the long across answers, but that’s only five cities, and the title says there are ten. where are the others? there are five down clues each mentioning a city, each with the same syntax:

what’s with the parenthetical on the XIE XIE clue? a closer look reveals that each of these down answers intersects one of the theme cities in the across answers—except that XIE XIE crosses two of them, so we’re only supposed to look at the first of these crossings. and the key is that we’re supposed to translate the down word into the language spoken in the across city:

taking the first letters of these five words in order gives BABEL, which is the meta answer. it’s apt because the meta mechanism is about cities and languages, but i was a little iffier on the instructions calling babel “an ancient city”; certainly the most familiar use of that name is in the biblical account of the tower of babel, which is of course an origin myth, not a historical account of a real place. however, babel was also historically the hebrew name for babylon, which was an actual ancient city, so it’s technically correct, i guess.

leaving technicalities aside, i enjoyed this meta quite a bit. there were several steps, and i stalled out a few times, but not for long, because there was always just enough there to get me unstuck: only five theme answers? well, the title says to look for five more. now what? well, the parenthetical on XIE XIE is a nudge towards intersections of across and down cities. and so on until you arrive at the answer. it’s a bit of a shame that the grid relied on some less-than-familiar cities, but i can see why it might have been necessary: HONOLULU doesn’t contain any of the letters of FETE (or FIESTA, about the only other familiar foreign word for party i can think of), and then you need a russian city to match the hawaiian city in length so that the letters can be extracted in order.

that’s all for me. how did you like this one?