Posted on November 3, 2019 by LauraB
Grid: 13:17; Meta: not immediate but pretty quick after figuring out the deal 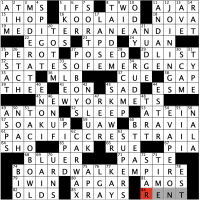 Peter asks, “what five-letter word is hinted at by this puzzle?”

With that closer, I knew it had something to do with Monopoly, as MEDITERRANEAN, STATES, NEW YORK, PACIFIC, and BOARDWALK are all properties in the game. But I didn’t see the next step right away, so I put it aside until the next day when I was Twitter-DM-ing with a solving pal, and then the very act of saying, “yeah I can see that it has something to do with Monopoly, and there’s that last entry with the rent on Park Place, and … oh!”

Look up the rents — without houses or hotels — on the properties hinted at in the themers (either grab the little deed cards if you have the game at home, or use the Monopoly wiki for reference):

Then, index those numbers to squares in the grid: 2 = T, 10 = O, 16 = K, 26 = E, 50 = N. That hints at (or, y’know, spells) the five-letter word TOKEN, which is our answer. In 2017, Monopoly dropped the thimble, the boot, and the wheelbarrow from its token array, replacing them with a dinosaur, duck, and penguin. With all due respect to cute animals, some argued that the Great Token Shift betrayed the game’s origins as a critique of capitalism.