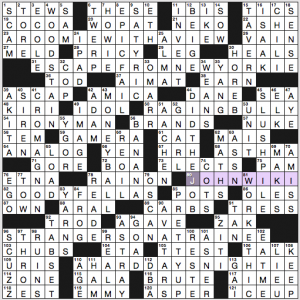 Quick recap, as I’m hungry and have dinner plans shortly. The theme is kinda fun: add a long-E sound to the end of a word in a movie title, adjusting spelling as needed to make a real word, and the clue the resulting phrase accordingly. So, 23a. [Your apartment-mate, if you don’t close the door before showering?] clues A ROOMIE WITH A VIEW, riffing on A Room With a View, which I still have never seen.

The other reworked movie titles are ESCAPE FROM NEW YORKIE, RAGING BULLY, IRONY MAN with a literary clue, JOHN WIKI (playing on John Wick, and I do want to watch the whole trilogy), GOODY FELLAS, STRANGERS ON A TRAINEE, and A HARD DAY’S NIGHTIE. Cute. Actually have seen very few of the theme’s movies, but the titles are all entirely familiar to me.

The rest of the puzzle didn’t strike much of a chord. It was there. The fill was mostly fine, the clues workable. 3.5 stars from me.

I’m writing this at Gate 27 of the San Diego Airport, so let’s be brief. The “finale” of the title is really “final e.” Each theme answer adds a final e to a base phrase for amusing results.

Variably amusing theme answers with one clunker of a base phrase. Interesting construction with all the theme answers following each other in rows.

Time to board the flight!

I liked this puzzle! More or less, that is.

Slightly more over the plate than our last two offerings, though still a bit of a curveball due to the merging of the classic “addition” and “subtraction” themes. Overall, clever- especially the helpful cluing- and a nice AHA moment when the solver realizes that ISH means “more or less” in and of itself.

My only nit here is that ISH doesn’t really strike me as a stand alone word outside of crossword puzzles. I feel like I need it to be a suffix in some kind of context. So it came across as a bit odd to build an entire theme around it.

There were some great entries (especially HASHISH BROWNS and PITCH BLACKISH), though inconsistency in whether or not the pronunciation of the base phrase changed with the addition/subtraction of ISH. HASH/HASHISH, DAN/DANISH, PAR/PARISH. I’m in the camp that doesn’t care about that stuff, but I’ve had a couple puzzles rejected in the past citing that as the reason. As an occasional constructor who has to get work approved by an editor, I feel like I have to worry about that stuff.

Apologies for the late post! And enjoy your extra hour of sleep so that we can all plunge ourselves into darkness a bit earlier. Happy Sunday!

THEME: The words IN and OUT are found in each theme answer 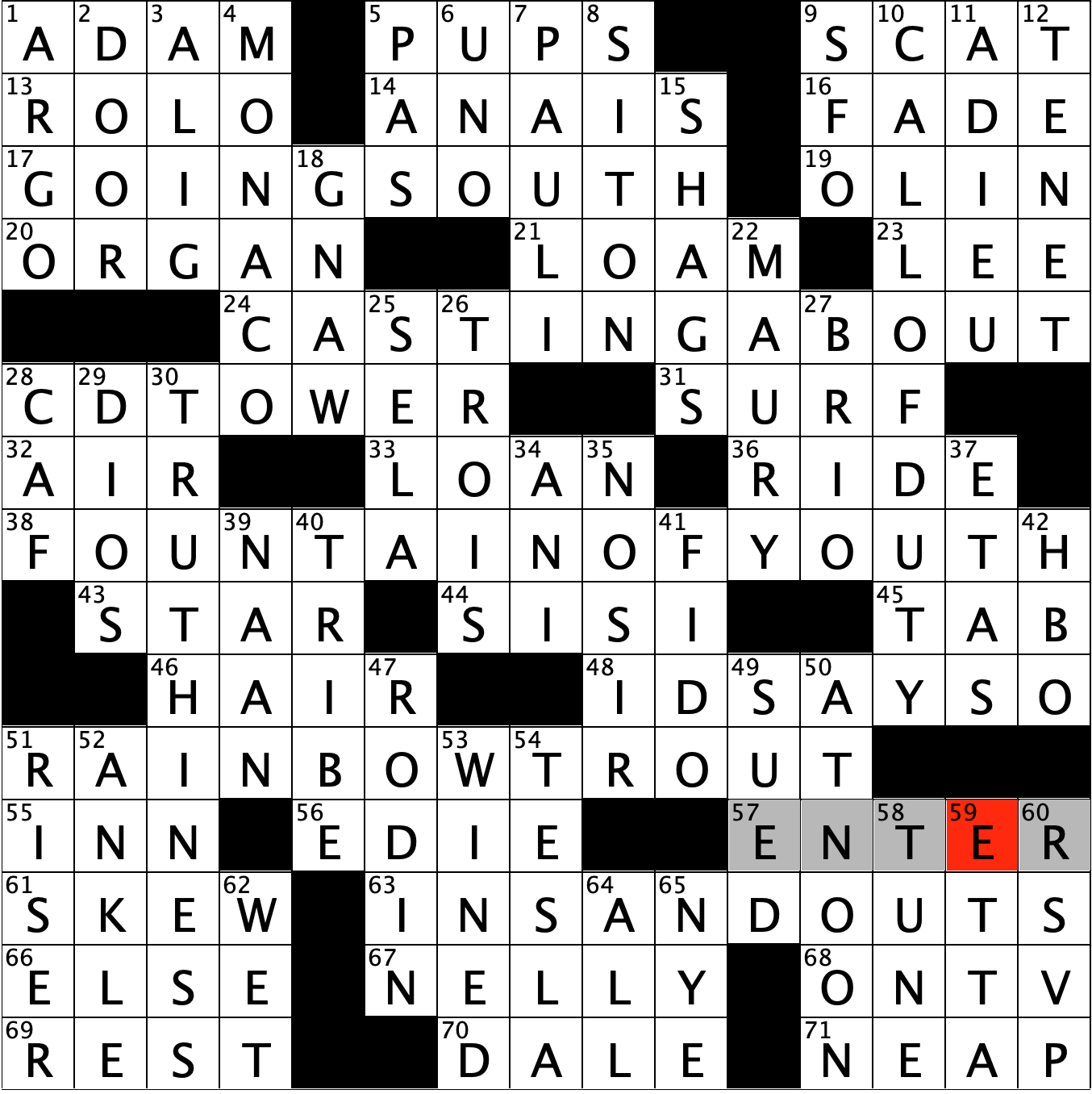 This theme is fantastic – really had my favorite moment of clarity when I got to INS AND OUTS and realized what had been going on. Loved it.

Great grid design here as well – lots of individual sections, but still nicely interconnected making for a very smooth solve. Some fun fill here – TRUTHINESS and I’D SAY SO the highlights for me today.

Clue of the day goes to NYE [Bill promoting science?]. Here’s a great Inside Amy Schumer clip featuring the Science Guy himself: