This week, we’re looking for a five-letter noun, which, self-own here, it took me quite a while to find. 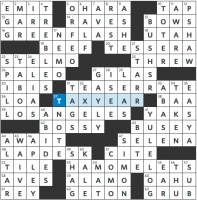 First clue should’ve been that the themers are unrelated, in terms of referential meaning, which should’ve gotten me to think about orthographic connections and/or transformations.

But I couldn’t unsee what I thought was a connection between TEASER RATE and [20a: Mosaic piece]: TESSERA, and I was looking for parallel transformations, which led me directly to nowheresville, so I put this away for a while. The next day, with fresh eyes and fortified with sugar from my kids’ unwanted Halloween candy (I take anything with dark chocolate as a parent tax — Halloween is the end of the parental TAX YEAR), I had another look and — tada! — nothing again. Then in the afternoon, I asked for a hint from Jesse, who set me on the right track: he said to look for other words in the grid that might correspond to the themers. Awesome, I thought: there’s EGG, that goes with OMELETS and … uh. More nope. I asked for another hint (readers: there is no, zero, none, zilch, shame in solving collaboratively and asking for hints in a non-tournament context and, if you care, I never enter the WSJ contest anyway), to which J. patiently suggested that I look at [47a: “The Queen of Tejano Music”]: SELENA and see if I can interpret the title to connect her to any of the entries.

Oh. The title is “Backdrops.” If you take the second words of the themers, turn them backwards, and drop a letter, you get other entries in the grid, like so:

The dropped letters spell out STAGE, which is an appropriate five-letter noun, and our answer. Very nicely done, and very much in Mr. Shenk’s signature style.

SELENA Quintanilla-Pérez was already a huge star in Tejano music, and was poised to become a crossover superstar in pop, when in 1995 she was murdered by a former assistant at the age of 23. If you’ve only seen the biopic with J.Lo, check out some of Selena’s original performances, where her enormous talent and charisma are apparent.