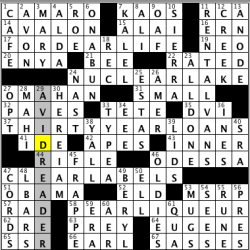 Good day, everybody! Hope all is well with you on this Election Day!

Today’s grid features a nice little spin on a particular phrase, as the word EARL is hidden/spans across two words in each of the first five themes. After that, EARL appears at the bottom of grid as the reveal, with those letters actually being in the middle of the theme entries, this giving a literal take to the “Earl of Sandwich” title (66A: [___ of Sandwich…and a quirky hint to the puzzle theme that lurks in five answers]).

The more I see KAOS in grids, and I think I’ve seen it twice or three times in the past three weeks or so, the more I long to watch old episodes of Get Smart (7A: [Evil agency in “Get Smart”]). Don’t know why I first put in “Eton” instead of AVON for that clue, which held me up for a little bit up in the northwest portion (2D: [Bard’s river]). My Spanish is pretty decent, though I always get leery anytime I encounter estos/ESTAS, as, at times, I have to leave the fourth letter blank because I’m not sure if the masculine or feminine version of the word is being used (25D: [These, to Jorge]). Especially since its clue included a male name, I would usually put in “estos” automatically. However, doing crosswords now makes me pause before committing to one or the other. Some of the livelier fill ended up being right next to each other, and I’m specifically referencing AVID READER (29D: [One for the books]) and HERE I AM (30D: [Reply to “Where are you?”]). Looks like I’m almost ALL DONE for today, but, before I go, there’s this (23D: [“Finished!”])…

“Sports will make you smarter” moment of the day: SIERRA (10D: [___ Nevada (mountain range)]) – Over a 20-year Major League career, outfielder Ruben Sierra was one of the premier power-hitting threats in the American League for a number of years in the late 1980s and 1990s. Sierra is best known for his time with the Texas Rangers, and, in 1989, he finished second in the American League MVP voting after leading the league in RBI (119), slugging percentage (.543) and triples (14). Sierra, who made the All-Star Game four times, ended his MLB career with 2,152 hits, 306 home runs and 1,322 RBI. Not too shabby of a career, I’d say! (In case you were wondering, Robin Yount of the Milwaukee Brewers won the 1989 AL MVP Award. Remember when the Brew Crew were in the American League? I’m sure most of you baseball fans do!) 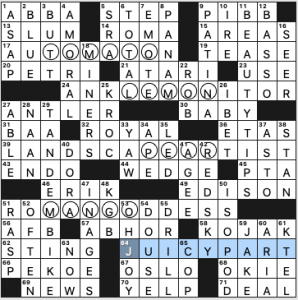 Theme works for me.

Not wild about fill like plural ETAS, ENDO-, IN AGES, or SEER. Overall, 3.7 stars from me.

The next election is in almost exactly a year, so a politically-themed “Frontrunners” puzzle feels simultaneously too soon and right on time. Let’s dive in: 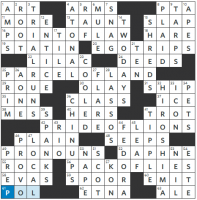 16A: POINT OF LAW [Judge’s concern]
25A: PARCEL OF LAND [Real estate chunk]
42A: PRIDE OF LIONS [Serengeti family]
56A: PACK OF LIES [Completely false story]
61A: POL [Campaigner found in the fronts of words of the four long Across answers]

I like this puzzle – it’s straightforward, consistent, and features a tiny revealer (which is always a weakness of mine). Each theme entry features a P___ O_ L___ pattern. I appreciate any 15×15 puzzle that’s well-constructed with 12-letter themers. They make segmenting the grid much more difficult and limit constructing possibilities – of course, Mike Shenk is a beyond-expert puzzle builder and makes it look easy! No crud in this grid, which made for a smooth solve.

I also appreciated the number of women referenced in the puzzle, including HERS, DAPHNE du Maurier, EVAS [Green and Mendes], Annie Lennox, and Sheena Easton. In fact, I think NEIL Diamond may be the only man referenced anywhere in the puzzle. ::celebration horn emoji:: More puzzles like this, please! 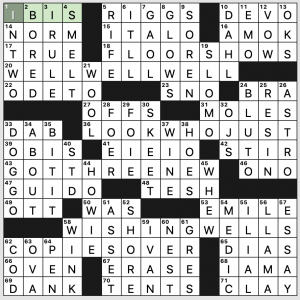 We have a quote puzzle for this week’s Jonesin’, which always gets my respect just because it seems like it is hard to find a quote that will fit in a puzzle! The theme answers combine to make this quote: “Well, well, well! Look who just got three new wishing wells!” (Insert rimshot here!) Yes, I thought this was pretty good. I get the feeling a lot of people don’t like this type of puzzle, and that is fair, but this one is not to hard to solve and there is a nice payoff at the end. We’ll take it! 4.3 stars from me. 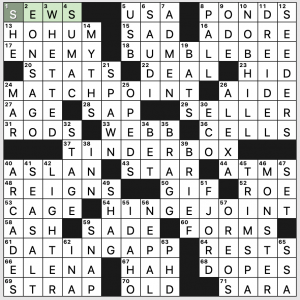 I am happily married, so a lot of the theme answers in this puzzle are unfamiliar to me. Here are the themers, along with the revealer at 61A:

Tinder and Match I know; the others, not so much. And I don’t think I want to research them either! Nice theme idea, though, and I had no idea what was going on until the very end, which makes for a nice solving experience. 4.4 stars for this one