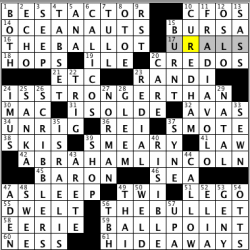 Good day, my fellow crossword enthusiasts! Here is hoping you had a pretty good weekend. Today’s crossword puzzle focuses on a famous speech given seven score and 16 years ago and delivered by ABRAHAM LINCOLN (42A: [Source of this puzzle’s quote (and who also delivered the Gettysburg Address on 11/19/1863)]). Along with Honest Abe being featured in the grid, we also have a quote attributed to him that is featured as the rest of the theme entries.

How much fun was this grid to do, especially with those chunky corners in the southeast and northwest, the latter setting up a wonderful start to the grid with BEST ACTOR (1A: [Oscar category for Gary Cooper and Gary Oldman]). This grid was so spicy, it even featured some FRA DIAVOLO to liven up the solve…and the taste buds (11D: [Spicy red sauce for pasta or seafood]). I got slowed down because I initially messed up my toothbrush brands, putting in Oral-B instead of GLEEM (28D: [Electric toothbrush brand]). I want to say that the NYT Sunday puzzle a couple of weeks ago had TAB SET, which was new for me to see in a grid, and I quickly recognized that as I was solving today’s offering (4D: [Word processing function]). I’ve told this story a number of times before on here, so I’ll make this short: I’ve actually met and spoken with multiple members of the OTTS, as, a few years ago, I ran into Mel Ott’s granddaughter, Gretchen, by happenstance at a Barnes & Noble as we both were looking for crossword puzzle books to solve (54D: [Slugger Mel’s family]). After introducing ourselves to each other and suggesting a few crossword books for her to buy, Gretchen then told me that her mother (Mel Ott’s daughter) was currently living in Arizona and that I should talk/interview with her for my then-nascent podcast. Here’s the link and audio to the hour-long interview with then-80-year-old Barbara Schneidau, Mel Ott’s daughter, on The “A Lot of Sports Talk” Podcast. If you don’t mind, take a listen and tell me what you think! The number of stories she told about living in New York in the 1920s and 1930s while the daughter of one of the city’s most revered athletes was something else!

“Sports will make you smarter” moment of the day: LAW (41A: [42-Across’s profession)]) – The Pittsburgh Pirates had a memorable season in 1960, winning the World Series in a memorable seven-game series against the New York Yankees, with Game 7 ending on a walk-off home run by Bill Mazeroski. Also during that year, Pirates pitcher Vern Law was the best pitcher in the Major Leagues, winning the Cy Young Award after going 20-9 with a 3.08 ERA and leading the National League in complete games . (The Cy Young Award was awarded to only one pitcher throughout baseball between 1956, the year the award was first introduced, until 1966, until the award was given in both leagues starting in 1967.) Law won two games in the 1960 Fall Classic, but he did so in pain as he was actually hurt during the Pirates’ celebration of winning the National League pennant right before the series with York. Law’s son, Vance, also played in the Majors and made the All-Star team as a member of the Chicago Cubs in 1988.

Thank you so much for the time, people! Have a wonderful rest of your day and, as always, keep solving! 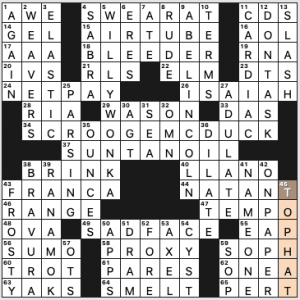 This is Trudeau’s second NYT puzzle this month. Do they not have enough accepted puzzles on hand to space out the bylines better? The “people/characters with TOP HATs” theme is one that Evan Birnholz did a few years ago for a Washington Post Sunday puzzle, with some additional layers to the theme and a taller black-squares top hat image in the grid. Today’s puzzle has 34a SCROOGE MCDUCK, 5d WILLY WONKA, 9d ABE LINCOLN (he hated being called “Abe”), and 43d FROSTY the Snowman, with the revealer 45d. [Something worn by the answer to each starred clue, as represented graphically in this puzzle’s grid], TOP HAT.

The grid’s three longest themers intersect, the black squares add another constraint on layout, and the corners all have stacked 7s. We end up with a lot of woeful short fill, stuff that is overtly hostile to any new solvers tackling this Tuesday puzzle they were told would be easy. The worst is 32d. [Every, in an Rx], OMN. Guess what? I have a lot of prescriptions and used to be a medical editor, and I needed every crossing here. A zillion abbrevs: CDS AOL AAA RNA IVS RLS (dreaded monogram #1) DTS DAS EAP (monogram #2! this might be unprecedented) OTS AGT. There’s NATANT, which is not a word most people ever encounter, and yet it’s in the Spelling Bee puzzle all the dang time. Crosswordese RIA and spelled-out numeral ONE-A. Foreign LLANO ERES FRANCA. Baseballese unknown to me and to my sports-but husband, 18a. [Grounder that squeezes between two infielders, in baseball slang], BLEEDER. There’s some nice fill, too, but I wasn’t appreciating it whilst solving all those gross little 3s.

Today’s topical word: 64a. [Small silvery fish], SMELT. In addition to the fish (which can be caught in the Great Lakes during their spring run), there’s the verb. And I’m not talking about metal processing, I’m talking about “whoever smelt it, dealt it,” and Monday evening’s trending topic, #fartgate. A BuzzFeed political reporter texted Rep. Swalwell, who says it wasn’t him; Hardball claims it was a mug scraping across a desk and not at all the show’s host, Chris Matthews, letting one rip. I have my suspicions.

2.5 stars from me. I might have enjoyed the theme (didn’t do/recall the prior Birnholz puzzle) if only the fill hadn’t been such a letdown. 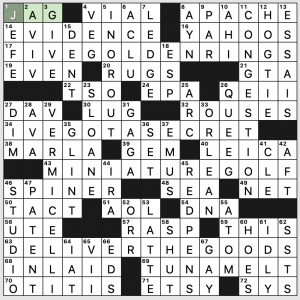 This one took me a minute to figure out the theme, but that shows how clever it is. Here are the themers:

Did you figure it out? Yes the letters EGO are hidden in each answer, thus leading to “I Strain”, as the title suggests. Very nice! I like that it took a little examination to get what was going on. Could a revealer have helped? Possibly, but in examining the grid, it may have been difficult if not impossible to add. I could be wrong; if you can figure out how to do it let me know! 4.6 stars for this one.

Until next week’s Jonesin! 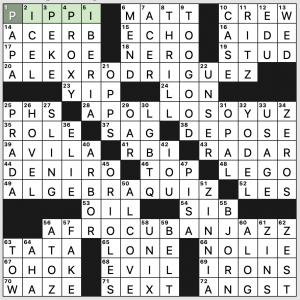 This duo has churned out a fine puzzle! This collaboration can produce more puzzles any time they would like! We have the trademark revealer in this one actually crossing a theme answer:

I was unaware of the US-Soviet joint space mission, especially since this was in the height of the “cold war” era. I doubt Russians are actually that scary. But a great idea, and done in a very entertaining way. The brainstorm process here was no doubt fascinating. 4.5 stars from me. 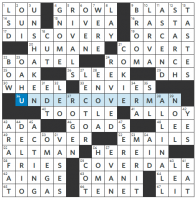 36A: UNDERCOVER MAN [Double agent, or one of four arrangements hidden in this puzzle

Four times in this puzzle, we have the word MAN hidden under the word COVER:
– HUMANE under DISCOVERY
– ROMANCE under COVERT
– ALTMAN under RECOVER
– OMANI under COVERDALE

Okay – that works well enough for me. The puzzle was largely smooth, though I can imagine some people might have trouble with the SE corner, especially in the ARAFAT / DEL RIO / ALTMAN / AINGE section. One thing I did not find very HUMANE at all was the cluing of DHS via ICE. Ripping children away from their families and ruining families? Sure, let’s make sure to mention that (and implicitly endorse that) in a fun puzzle!

Quick write up today because my husband and I just got a new puppy and he’s running all over the place. Thankfully, no GROWL so far! : )