This week, we’re looking for a weather term. Where I live, we already have snow on the ground and lows in the teens. Let’s hope hope for nicer weather in this puzzle. 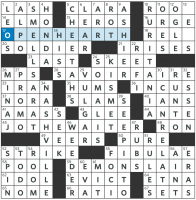 Despite the presence of a couple of deep, deep cuts — a 1978 Gary Numan song and an RPG that’s been out of print for 15 years — this jumped right out at me. The last word of each themer is one of the classical elements plus an extra letter.

Those letters, taken out of the elements — hence the puzzle’s title — spell HAIL, which is a weather term, and our answer.

A few words about that Gary Numan song: it’s about a doomed gay affair, and inspired by William S. Burroughs’s novel Naked Lunch. Numan released it with his band Tubeway Army, on their self-titled debut album. If your main association with Gary Numan is the 1979 crossover hit “Cars,” then this earlier song is worth a listen.