This is a fun theme despite – or maybe because of – the mansplainy vibe. The fill is slightly clunkier than I expect from Patrick; overall, it’s still enjoyable.

“Actually….” leads in to the clue for each theme answer, and they’re not precisely what you might think. 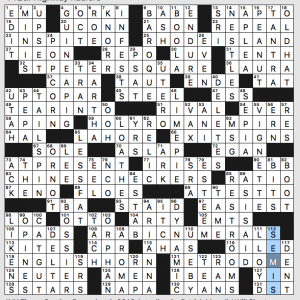 What I didn’t know before I did this puzzle: that S STARS are cool red giants.

This puzzle reminded me that there are a lot of books out there that I haven’t read. There’s still some classics I need to get to (still haven’t cracked the cover of Moby Dick) before I tackle some of the unfamiliar ones in this puzzle though.

THEME: Book titles that include the colors of the rainbow 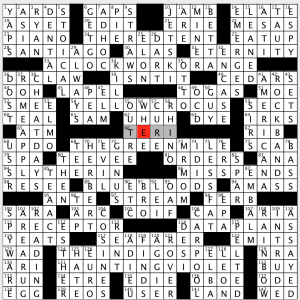 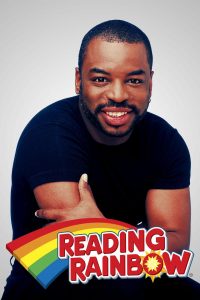 I’ve read exactly two of these, I’m sure neither of which was covered on Reading Rainbow (THE GREEN MILE and A CLOCKWORK ORANGE). The only other one I’ve heard of is BLUE BOODS. The rest, I think, were new to me. However, all titles were inferable, thanks in large part to the theme and the ROY G. BIV order that was respected in the puzzle from north to south.

The left/right symmetry allows for theme entry placement that wouldn’t be possible in a traditional grid, though it was still funky to find the last two themers stacked on one another (and impressively so with very little resulting crud in the fill!).

All in all, a fine puzzle. I just wish I wasn’t left feeling so illiterate due to my ignorance of so many of the titles.

I was very surprised by the straightforwardness of this week’s offering too! Last week’s prediction that today’s would be a curveball was completely amiss.

Some words are also names! Today’s theme clues describe two-word phrases as if they were names. 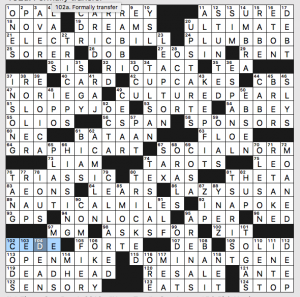 I found the theme mostly entertaining except for 113a, if not particularly challenging.

What I didn’t know before I did this puzzle: the the EROICA symphony was originally dedicated to Napoleon.

I leave you with the immortal PEARL Bailey.