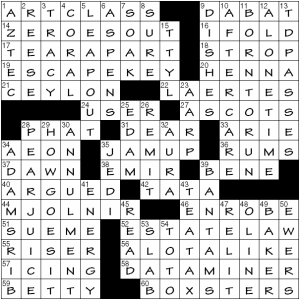 Unusual gyroidal grid here, with 90º symmetry as well as the standard 180º variety. As a result, substantial swaths of white comprise each quadrant while the central node is tethered to those by relatively gossamer transitions.

On top of the impressive construction, I found practically nothing to quibble with among the fill, despite all the heavy stacking.

First, a bit of personal narrative regarding 21-across [Island once called Serendip, source of the word “serendipity”] CEYLON – I was not long ago chatting with another crossword aficionado who in the course of our discussion characterized a sequence of events by deeming them in TOTO (54d) to be ‘serendipity’. In passing and to myself I recalled the relationship to the ancient name Serendip and so forth.

Then I went and solved this puzzle and, lo and behold, 21-across manifested. I reported this to my friend by way of minor coincidence. Then—and this is where the payoff is—she asked if I was blogging the NYT today, to which I quickly responded “nope”. Shortly after, I realized that, yes, I had agreed to cover the Saturday Times crossword. So it was quite a serendipitous chain of events that led me to blogging this puzzle in a relatively timely manner, rather than, no doubt irksomely to many readers, sometime Saturday morning. Ta-da. 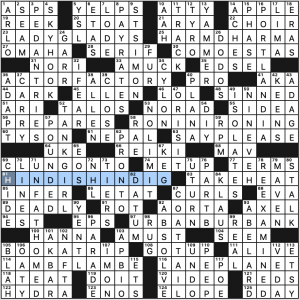 Nice theme with mostly very solid entries. I wonder what process Will took to find these. I’m thinking a regex search might produce the best results. 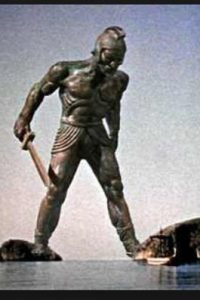 As for the rest of the grid, I really had to wrangle it into submission. I did not feel like I was on the right wavelength (or maybe it’s just too early on a Saturday). Things like SKYHOOK, REIKI, ABELARD, VEDA, and TALOS needed most of the crossings before they fell. And if you didn’t know TANK GIRL (52d, [1995 cult classic film starring Lori Petty]), which I did thankfully from many a LORI clue in previous puzzles, that initial T crossing TALOS might’ve been a tough one. LET AT (86a, [Unleash upon]) was no fun, especially since I had to change it from the equally un-fun SET AT. And UNFATHOMED (71d, [Not fully explored]) is unusual as an adjective, but at least it was inferable.

On the other hand, there was a good amount of lively entries that I did enjoy: PORTLANDIA, NINEVEH, NO LIMIT, “SAY PLEASE,” TAKE HEAT, COATTAIL, CYLON, “PRONTO!” and “¿CÓMO ESTÁS?”

And that’s all I can muster up for today. An enjoyable, rewarding theme, some good stuff in the fill, but also some challenging entries and clues that threatened to turn the endeavor into a slog. Overall, though, thumbs up. 3.75 stars. 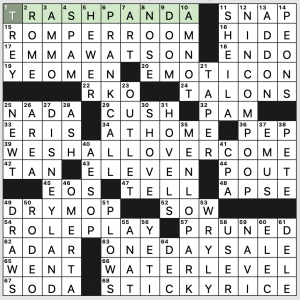 My good buddy Neville has today’s LAT Saturday puzzle. Maybe that explains why my time was not great! This played a little tougher than normal for some reason; even the smooth Black Ink interface couldn’t save me this time! Neville is a brilliant solver and constructor, and I wish he would get more puzzles posted on his site! They are always a joy to solve, and this one was no exception. 4.5 stars from me.

Michigan has  big game today, so I have to go! 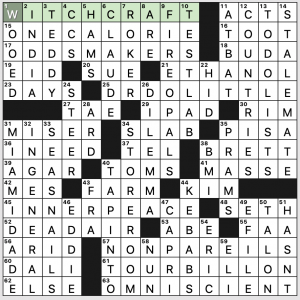 Another great puzzle by Stan Newman this week. He is still a great talent, and still quite prolific. This fill seems almost effortless. And yes, I did learn a new word in this puzzle, which may or may not be familiar to others, unless they are watchmakers! 4.6 stars.