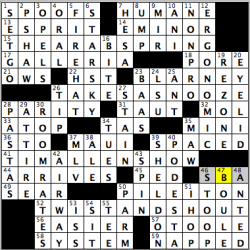 Today’s puzzle made me think about the people who made life easier on me while in college more than any group of people during my times freezing in Central New York: teaching assistants, or TAS (34A: [Prof’s helpers…or a hint to the puzzle theme]). In the puzzle, the four longest entries all are three-word answers with a T___ A___ S___ pattern.

I totally am out of the loop when it comes to network sitcoms, but I’m guessing the CBS show Young SHELDON is a spin-off to Big Bang Theory and the kid who plays the role is just the younger Jim Parsons/Sheldon (39D: [“Big Bang Theory” character with an IQ of 187]). Outside of seeing all of the red “BAZINGA!” shirts people wear and that former Blossom star Mayam Bialik (a.k.a. one of my first crushes) is part of the case, I really don’t have any knowledge of those shows. The intersection of SBA (46A: [Org. that aids new entrepreneurs]) and BOULE almost got me, as it took running through the alphabet before being somewhat comfortable in putting down the “B” (47D: [French gambling game similar to roulette]). Now that it’s Cyber Monday and that I just finished this puzzle, I’m going to go online shopping to see if there are any deals on ERGONOMIC chairs, as I definitely miss having one of those when I was at my former place of employment (12D: [Like a good office chair, perhaps]). For real, I miss having one of those chairs for my own!

“Sports will make you smarter” moment of the day: LSU (24D: [Baton Rouge sch.)]) – It is looking for all the world that college sports’ most-famous individual award will be heading down to the Bayou for only the second time. LSU senior quarterback Joe Burrow is the frontrunner to win the Heisman Trophy in 2019, this after one of the great seasons by a signal-caller in modern college football history. Currently, Burrow is completing an astounding 78.3 percent of his passes (which would shatter the previous record for best completion percentage in a single season) while throwing 44 touchdowns to just six interceptions. When the awarding of the Heisman becomes official on Dec. 14, Burrow will become just the second LSU athlete to win the award, joining Billy Cannon all the way back in 1959. This past Saturday, Burrow, an Ohio native, showed his love for the people in the Pelican State by Cajun-izing the end of his last name on the jersey he wore when being introduced to the fans for Senior Night. As they say it (and spell it) down in that area, Geaux Tigers! 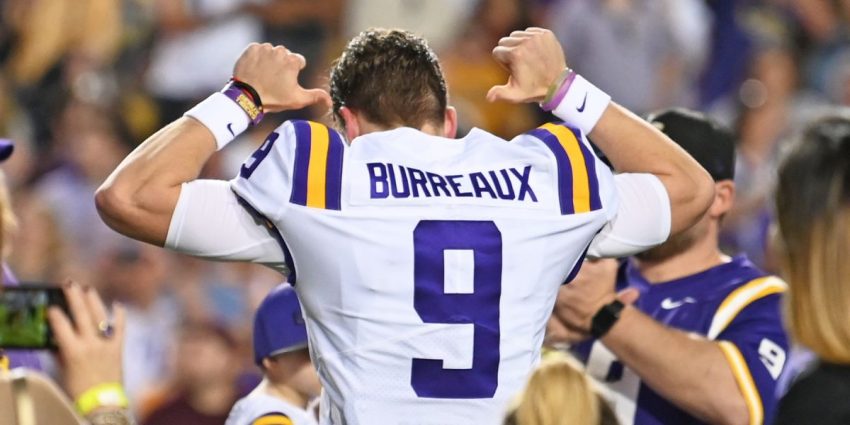 I’m excited to see Amanda’s name on the byline and doubly pleased that I get to review the puzzle. Amanda and I have become SoCal friends – she is hilarious, wildly smart, and incredibly kind. She has had many co-constructs with Ross Trudeau lately, but this is one of her first solo puzzles (with many more to come!). Let’s see what “Stages of Change” she has in store for us: 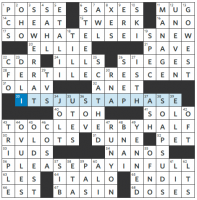 17A: SO WHAT ELSE IS NEW [“Well, that’s unsurprising”]
28A: FERTILE CRESCENT [Cradle of civilization]
43A: TOO CLEVER BY HALF [Irritatingly confident of one’s own intelligence]
56A: PLEASE PAY IN FULL [Request on a bill]
33A: ITS JUST A PHASE [Parental comment about a teen’s rebelliousness, and a hint to the last words of the starred clues]

Each of the themers ends with a phase of the moon (new, crescent, half, full), and these “Stages of Change” are also in chronological order. Nicely done! Clearly all 8ish phases of the full moon cycle can’t fit in a puzzle like this (and many would be redundant), so I appreciate that she hit the highlights and took care to order them. One of my other favorite things about this theme set, which is true of many of Amanda Rafkin’s puzzles, is that it features many long, grid-spanning entries while not sacrificing the fill. SO WHAT ELSE IS NEW is particularly crisp and fresh.

Even if I didn’t see Amanda’s byline, do you know how I could be reasonably certain this puzzle had been written by a woman? It included IUDS, ELLE, and OVULES in the same puzzle. I’m here for it! I also liked TWERK, JOLT, and ELLIE Kemper, and I was glad to see her sneak in LES Miserables and Damon RUNYON (she’s a musical theater nerd). I wasn’t keen on A NO and A NET in the same puzzle and had to get the CDR and LTS officers by the crossings, but those are small potatoes compared to how much I otherwise enjoyed the puzzle. Gold stars!

The theme revealer is 62a. [With 64-Across, performer who is like the words sounded out at the starts of the answers to the four starred clues], VOICE / ACTOR. Those four entries begin with homophones of “heard but not seen”: 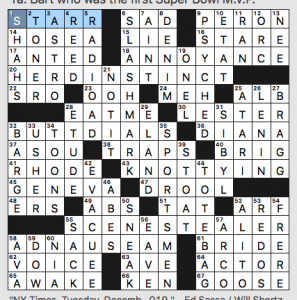 Revealer clue is awkward. That voice actor is not at all “like the words.”

In the “why would you foist this vocab on Tuesday newbies?” category, we have SRO, ALB (!), A SOU, Latin AVE, ONE L, STOAT (!), and ELAND, plus some other foreign words.

Matt Jones’s Jonesin’ Crossword, “Save IT Till the End” – Derek’s write-up 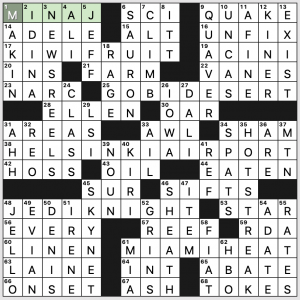 This is another puzzle that I’ll bet the brainstorming process was a lot of fun!

So we have all of the theme entries being two words that the first ends in I, and the second with T. What is the name for the last letter of a word? The first letter is the initial; is it just final? Maybe I am overthinking it. Anyway, I couldn’t think of any other instances of this, but I am a little sleepy. Can you? 4.4 stars for the latest Jonesin’ 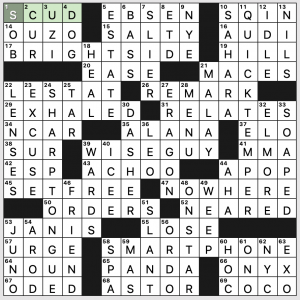 This puzzle should make you feel smarter!

Nicely done. The idea here, I would think to have these synonyms for “smart” all used in a way that doesn’t necessarily mean the same thing. I think this was accomplished; “WISEGUY” in this sense basically means a smart-aleck, so I think it works. Clever enough for a Tuesday, that’s for sure! 4.3 stars today.