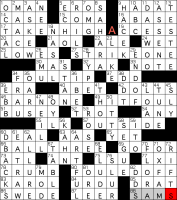 hello and welcome to episode #600 of matt gaffney’s weekly crossword contest, “Umpire State of Mind”. matt’s instructions this week tell us to look for what happened (precisely) on the eighth pitch. okay, what are the theme answers? seven medium-length across entries detail the first seven pitches of a hypothetical at-bat:

okay, so what about that eighth pitch? i really have no idea. but let’s go through a couple of things i noticed.

the most unusual thing is that there’s an A that needs to go in a black square. you certainly don’t see that every day!

the second is that the seven theme answers fit into the 15×17 grid in a not-quite-symmetric fashion. in particular, the slot symmetric to the fourth pitch, HIT FOUL, is not part of the pitch sequence: {Period} BAR NONE. but it’s definitely interesting—it’s only a couple of letters off from BALL ONE, for example.

getting back to the extraneous A, there are a handful of A-starting entries, as would be expected for any crossword grid of moderate size. the most striking of them, just above (A)CCESS, is {Belittle} ABASE, which seems like it might be relevant to a baseball theme. not sure what it’s doing, though.

the symmetric partner to the black square with the A seems to be totally normal. there’s an unusual clue at 56, {Yale University Art Gallery architect} KAHN, in the sense that i have never heard of this architect and it’s customary to include the first name in the clue for a less-familiar last name (turns out it’s a guy named louis KAHN). david j kahn, another kahn, is famous for writing baseball crosswords, so i wonder if this has something to do with that (although it probably oughtn’t).

oh hey, the clue for 1-down is {In base eight} OCTAL. that seems like it might be related to both baseball and the eighth pitch, but again, i don’t really know what to do with this.

oh boy, how did i miss this on the first pass? {Like a literary pickpocket} ARTFUL. the clue is conspicuously missing the word dodger, which is a baseball team. seems relevant!

based on just this and the extraneous A, i’m going to guess kirk gibson’s home run off dennis eckersley in the 1988 world series, because i’m out of time. maybe it’s right? i dunno.

let me know in the comments what i should have seen…