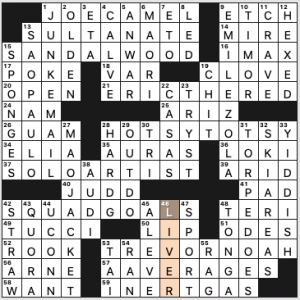 Okay, I didn’t time my solve because we’re watching Ronny Chieng’s new stand-up special on Netflix. (He’s the Malaysian comedian who’s on The Daily Show. Aaand the show is ending now, so I can actually focus on blogging here.)

Educational moment: 24a. [Origin of many refugees once in 26-Across, for short], NAM / 26a. [See 24-Across], GUAM. I did not know Guam received lots of Vietnamese refugees. I’ll bet Jim P, Team Fiend’s only Guamanian writer, was well aware of this fact.

Also did not know: 19a. [Tea flavorer in the Middle East], CLOVE. I’m not huge on tea, and have never been to the Middle East. And! Really not big on cloves.

The puzzle didn’t really have any trouble spots that MIREd me, other than trying ADORE before CRAVE for [Really fancy]. (And I’d argue that really fancying something doesn’t mean that you crave it. Like, I fancy Lou Malnati’s deep-dish pizza, but I don’t crave it most days. I will adore it all the time, though.) 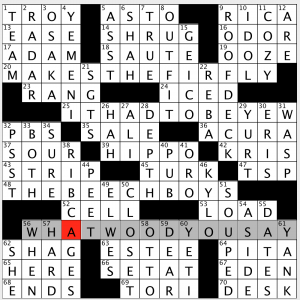 Really enjoyed the revealer on this. The puns themselves were solid, though I had to infer the first one. I’ve never heard of the phrase “makes the fur fly.” In quotes, it googles to less than 9,000 hits, so perhaps it’s not all that common a phrase, or maybe it’s old-timey. According to idiom sites, it means “to cause a disturbance,” which makes sense. I think I’ll start using that phrase. I like it.

We’ve seen the tree puns before, but they work well enough and as long as the theme is executed well (as it is here), it doesn’t feel tired at all.

Overall, strong as an oak. 4 stars. 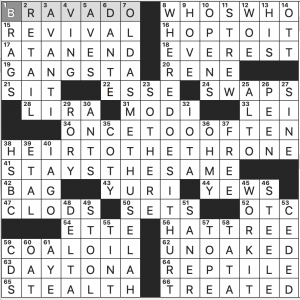 This was a great puzzle! There are two 13’s and three 15’s that intertwine in the middle of the grid, and they are all great entries. I didn’t find anything too tough, but I did learn a new phrase or two. I will discuss all of the aforementioned below in the comments, but this one was fun. Just under 7 minutes for me, so not too slow, but not super-fast either. 4.7 stars today for a fine puzzle. 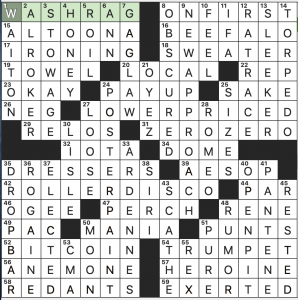 This was the best Stumper puzzle I have seen in a while. There is nothing in here that is even remotely obscure, at least to me, and I don’t know anything! There are too many good entries in here to mention them all, but I will still mention a few of them anyway below! A solid 4.9 stars from me for a masterpiece!

Some of the many favorites I had:

As an added bonus, I thought you crossworders might enjoy this Tweet from ESPN. Have a great weekend!

The puzzle posted online very late, so this will be a minimal post. Our theme is the SH sound prepended (phonetically) to well-known phrases. 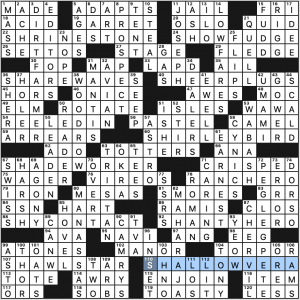