This is the toughest puzzle I’ve done in a long time aside from Tim Croce’s Club 72 freestyles, which are brain-crackingly difficult. For reference, I do the Saturday NYT puzzles in well under ten minutes. Wyna’s puzzle comes very close to Tim’s degree of difficulty. It’s clean and wide-open with a grand total of four three-letter answers. Some of the fill is a bit obscure and the cluing is, well, fiendish. No complaints – it’s a great puzzle. 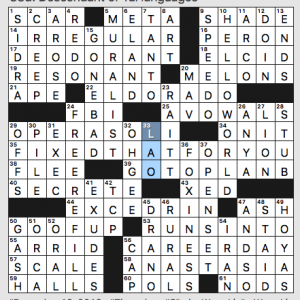 There’s the hidden-upper-case-letter trick: 17a [Degree, e.g.], which is DEODORANT. There’s slang that’s not overtly signaled as slang: [Domes] and MELONS are slang synonyms for “head.” There’s the clue that’s accurate but so vague that it’s not really helpful: 20d [King’s rival] is MAV, because it’s the basketball team, not an actual king or Elvis or Billie Jean. There’s punnery: 24a [Stingy group?] is the FBI. There are connections I’d never thought of before: 40a [Ooze or conceal] is SECRETE. Now that I think about it, that one seems a bit off. “Ooze” is passive; SECRETE is active.

I suspect that solvers who object to trivia will not like this puzzle. There’s pop music trivia (CREEP), programming trivia (HELLO WORLD), actor trivia (ANYA Taylor-Joy of “The Witch” and Ingrid Bergman’s Oscar-winning turn as ANASTASIA), foreign-language trivia (TANTO, which is a samurai sword) and sports trivia (HOYAS). Something for everyone, at least.

What I didn’t know before I did this puzzle: this could be its own blog post. I didn’t know the samurai sword, HELLO WORLD, ANYA Taylor-Joy, Bergman’s Oscar-winning role, the 90s music trivia, that EL CID means “The Lord,” or that LAO is a descendant of the Tai languages. I did know that EXCEDRIN contains caffeine. 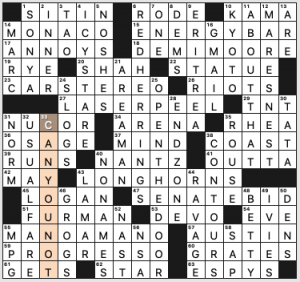 Wow, two puzzles in a row on Crossword Fiend by gifted Chinese-American constructors! I haven’t done Wyna Liu’s Inkubator puzzle yet but I do look forward to it, as I always look forward to Zhouqin’s work. We even get an extra column of grid in this NYT puzzle.

Ten things that caught my attention:

Overall, the fill was quite smooth, but not especially full of surprise or sparkle. A solid four stars from this critic.

I know the LAT doesn’t follow the same increase-the-difficulty pattern as the NYT; I still expect something a little chewier on Friday. I really enjoyed the theme and the revealer made it more fun. Some of the fill had me raising my eyebrows. Overall I give it a thumbs up.

We have four theme answers, all familiar phrases with something added. 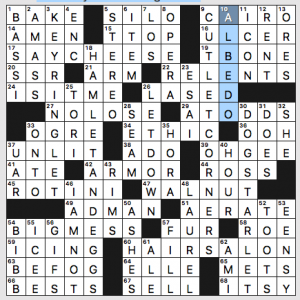 And the revealer: 26d [Disappointment … and a hint to four puzzle answers], which is LETDOWN. All the themers are in the Downs. Nice!

Not fond of BASSI  or BEFOG or NO LOSE. TORI is a perfectly good woman’s name with at least two well-known examples I can think of; why is it clued as a word no non-mathemetician ever uses? [Bagels and donuts, shapewise] is a clunky clue. Why? I blame the patriarchy.

What I didn’t know before I did this puzzle: that ALBEDO is the [Planetary reflected-light ratio]. OK, then.

After getting off to just a totally dead wrong start in the NW with TEE as the “Concert merch” (missed the “formerly”) and TRACTS as the “Prospectors’ purchases,” I managed to mostly right the ship and sail through this puzzle. I don’t have a ton to say about it, other than “Patrick Berry is very good at making crossword puzzles,” although this one was somewhat less exciting (though equally clean and well-made) compared to some of his other recent New Yorker offerings. 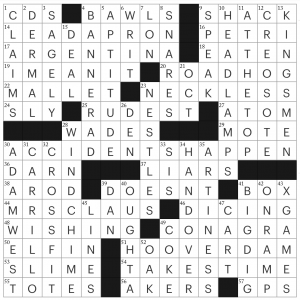 The marquee entry ACCIDENTS HAPPEN is a neat 15, but it’s also kind of a meh phrase? The 9s weren’t particularly more interesting either (ARGENTINA, HOOVER DAM, TAKES TIME, LEAD APRON, HEADLAMPS, WIND CHIME). Nothing wrong with any of those, and LEAD APRON is weird enough to stand out, but I can’t say this was as chock-full of excitement as I’ve come to expect from the New Yorker.

Also, ok, CREOSOTE? It’s valid and I learned something new, but I wonder where the line is on “miscellaneous chemical compounds” that can be included in the grid.

Overall, not my favorite puzzle by Patrick Berry, but only because I have unrealistically high expectations of wow factor from this constructor and this publication. It’s solid and well-made and has no bad fill, so it’s still getting lots of stars from me. 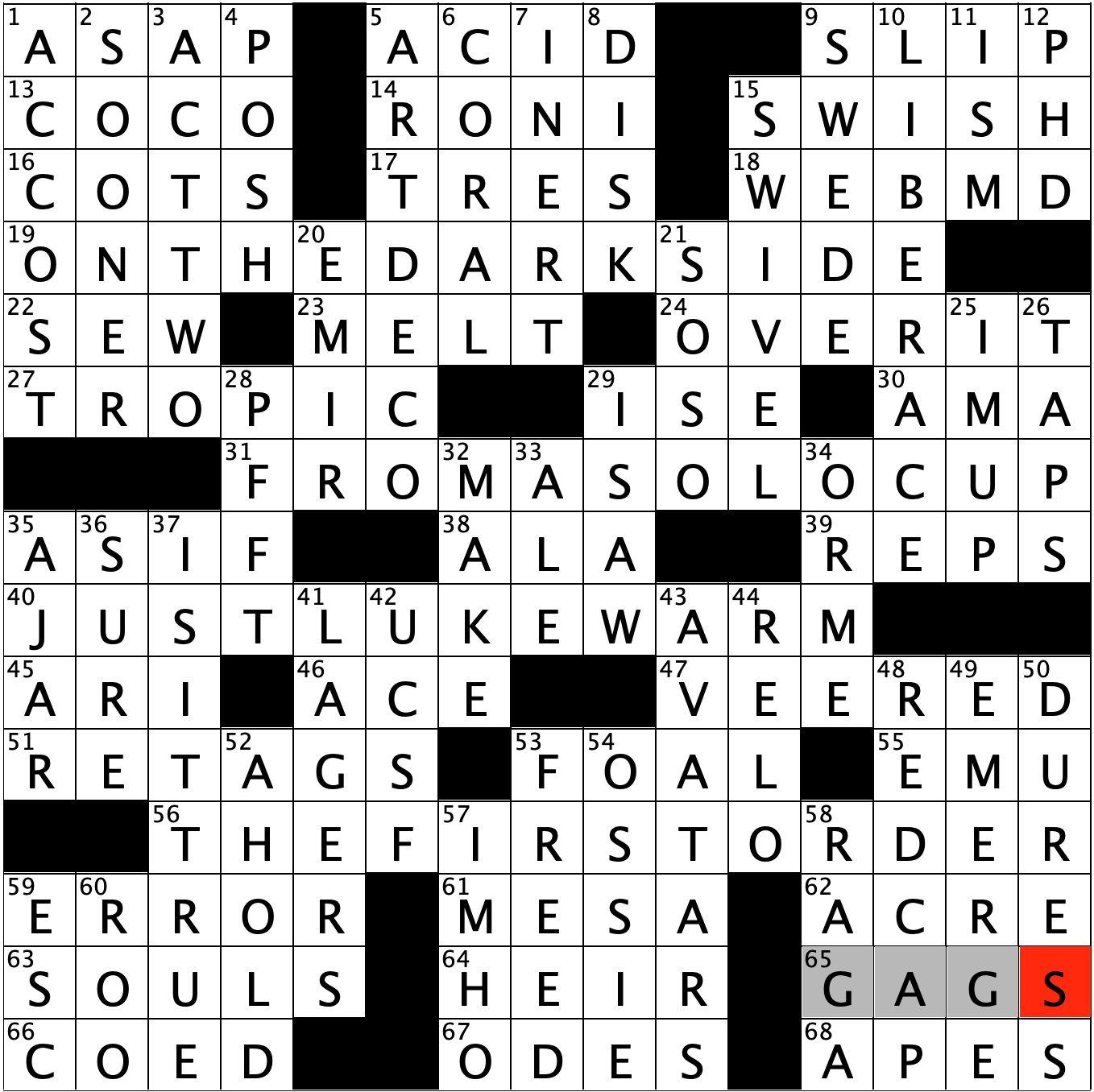 With The Rise of Skywalker opening today, this puzzle was very timely – entertaining enough that even this non-Star Wars person really enjoyed it. ON THE DARK SIDE is definitely the strongest entry here, but all are clever and fun. I think SOLO CUP and LUKE WARM are great parts of this puzzle, but the intros to them – FROM A and JUST – felt a bit thrown on to the answers and slightly less legitimate.

Tons of great fill here – OVER IT, LIBERACE, IS IT TRUE, AVATARS, ART DECO, SWIVEL were all fun finds. Also some great cluing here – always great to see inventive and clues on words that pop up all the time and I loved ACE [Best club in Vegas, usually?] and ACRE [It might be a lot].