Chanukah sameach! A seasonal puzzle from Tim. It’s slightly smaller than usual (14×15), as befits a minor holiday that has been blown out of proportion in the US by its proximity to Christmas

Each theme answer has circles. 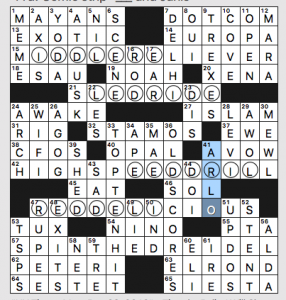 And the revealer: 57a [Play a game during Hanukkah … with a hint to 15-, 21-, 42- and 47-Across], SPIN THE DREIDEL. The circle letters are the letters of DREIDEL all mixed up, or spun. A perfectly fine Monday theme.

What I didn’t know before I did this puzzle: that Madonna has 38 TOP TEN HITs, and that’s a record for all artists. Impressive. Different sites quote different songs as her biggest hit – either “Into the Groove” or “Like a Virgin.” I prefer the former, so here you go.

Today’s puzzle has a simple synonym theme, but I still needed the revealer to figure out what was going on. It’s the brainchild of debut constructor Anne Marie Crinnion. Congrats on a fine grid!

61a is COLD OPENS clued as [Scenes before TV shows’ title sequences, and a hint to the starred answers]. The other theme answers start with words that can be used to describe cold weather. 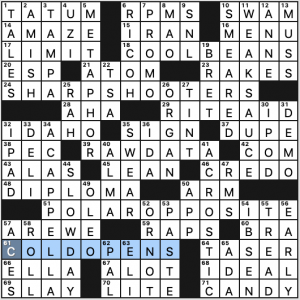 I like the use of words you don’t immediately think of when considering cold weather, namely “sharp” and “raw”. Here in the Pacific Northwest, we’ve had one cold snap (which I consider to be around freezing), but it’s been mild ever since. If you’re experiencing raw, polar weather, you have my sympathies.

Of course, no show is more famous for its COLD OPENS than SNL, which appropriately, does put in an appearance (at 9d).

Elsewhere in the grid, I loved the fill like A CAPPELLA, ACROSTIC, SLOW DAY, METAPHOR, RITE AID and DIPLOMA. I needed crossings for the lively and colorful WEAK SAUCE [Thing of disappointing quality, in slang], but I think I’ve heard that at some point. 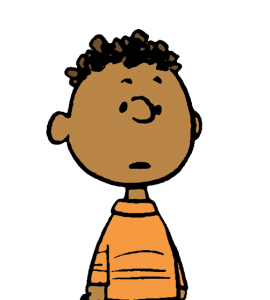 An impressive debut that’s Monday-smooth but with plenty of sparkly fill. Four stars.

Well THAT was weird! Very cool and different and on-brand for the New Yorker itself, if not so typical of their crossword brand. In this puzzle, 8 of the entries were clued with New Yorker cartoons (7 acrosses, and, weirdly, just one down), and to figure out the entry, the solver had to figure out the caption. 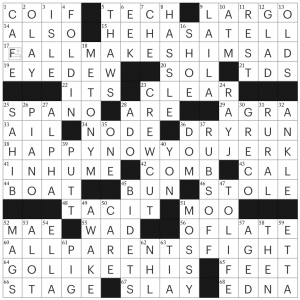 I don’t really know how to review this? Many points for creativity and crossword innovation, but I can’t say I particularly enjoyed the solving experience. The most frustrating part was the way the cartoon clues automatically popped up any time you clicked through a square that was part of the caption, so you couldn’t solve the crossing entries without x’ing out of the cartoon every time.

I also didn’t totally get all of the captions. Specifically, FALL MAKES HIM SAD. The picture in the cartoon is of a man holding a rake like a guitar and wearing sunglasses… where is the sadness? Is it implied by his pose? I guess I do get the rest, but only a few made me laugh (ALL PARENTS FIGHT and MOO).

I’d be curious to know about the accessibility of this puzzle as well. I assume some people with visual impairments solve crosswords with screen readers, and it would require detailed image captions to replicate the solving experience.