Super quick post since I have guests and it’s the first night of Hanukkah. 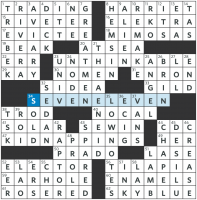 This week, we’re looking for something you can buy at 34-Across. What’s 34-Across? Why, it’s a nationally known convenience store chain!

The chain was originally called Tote’m Stores but the name was changed in the 1940s to reflect that the stores were open from 7am to 11pm, as I just plagiarized from Wikipedia. There used to be a chain in New England called Store 24 (which I always called “Store 18” because it was only open 18 hours/day) that was renamed Tedeschi Food Shops (which I always called Tedeschi Food Trucks Band Shops [being friends with me is so fun because I have extra names for everything]) and is also being taken over by 7-11.

Where were we? Right. One of these where I couldn’t get any traction right away (I try to solve the WSJ metas on Thursday afternoons if I am not out somewhere) so I put it aside and then bugged Jesse about it on Friday when I figured he wasn’t getting any work done either. Apparently this was a pretty simple one but I couldn’t make any sense of it even with him saying, patiently, “what do the numbers SEVEN and ELEVEN suggest?” (Oooh! I know! Retired New York Giants football player Phil Simms! and … some other guy!) No, look at the grid. Do you see anything that SEVEN and ELEVEN might suggest? (I was beginning to sense some impatience through the series of internet tubes.) Are there, like, seven things and then, like, eleven other things? Does seven + eleven = something? Do they sell beer at 7-11, because I could use one? Anyway, I hope he was laughing at me because I got hoist with my own petard as it were.

Namely, the candy bar … which is certainly something you can buy at 7-11. My favorite mainstream candy bar of late is the Milky Way Midnight, a dark chocolate version of the standard Milky Way and which I claimed as a parent tax from my kids’ Halloween hauls this year.

Two WSJ metas in a row that go to eleven. Why didn’t they just make the metas that go to ten a little harder?