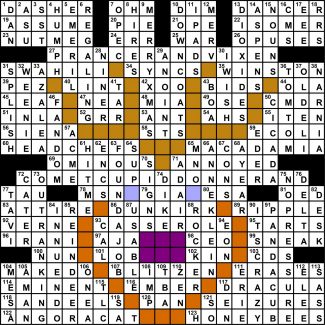 Hello there, everyone! It is Christmas Eve and, first and foremost, want to wish everyone a happy holidays and an early MERRY X-MAS (9D: [Quick holiday greeting]).

One of the staples of holiday lore is mystical REINDEER that help aid the jolly fat man wearing those EEE (17A: [Santa’s shoe width, most likely]) shoes in delivering presents to all who have been nice, and today’s grid pays homage to those flying deer (85D: [Puzzle theme that inspired today’s art grid]). Not only are all of the reindeer, outside of red-nosed Rudolph, identified in the same order that they appear in song, the shape of a reindeer head is embedded in the layout of the grid! How cute, right?

The art necessitated a couple of two-letter entries, in SA (119D: [Brazil’s cont.]) and SO (121D: [“___ what else is new?”]), which is more than OK to stomach when executing a layout so exquisite. There’s also some love given to Kwanzaa as well, with the clue to SWAHILI (31A: [Language from which “Kwanzaa” is derived]). Loved the little science-themed northeast with DIOXIDES (13D: [Dry ice and silica, e.g.]) crossing ISOMER (22A: [Compound with multiple forms]). The fill OLD ELI could describe a Yale alum or what a New York Giants fan might cry about watching the team for the past five years or so (37D: [Yale University nickname]). So long as you did not mind a longer solve than the usual Tuesday fare, this grid was a wonderful way to ring in the holiday season, crossword style! So much awesome middle-to-long fill that it’s impossible to highlight them all. Well, I’ll highlight NO PRESSURE to cap things, because I hope you’re not feeling any as you go into the holidays (75D: [“Take as much time as you need”]).

“Sports will make you smarter” moment of the day: WAR (25A: [“___ and Peace”]) – The analytics movement has taken over in terms of front offices evaluating players and, in baseball, one of the catch-all statistics that has come from it is WAR, or Wins Above Replacement. According to the MLB.com website, the statistic “measures a player’s value in all facets of the game by deciphering how many more wins he’s worth than a replacement-level player at his same position (e.g., a Minor League replacement or a readily available fill-in free agent).” Simply, the number represents the number of wins the player added to his team above what a replacement player would add. Along with comparing offensive numbers to a replacement-level player at his position, WAR also calculates defense as well. As of the 2019 offseason, Barry Bonds has the highest career WAR, with 162.8, with Babe Ruth second at 162.1.

On Christmas Eve, we’re treated to a holiday-themed puzzle by the editor himself, Mike Shenk! 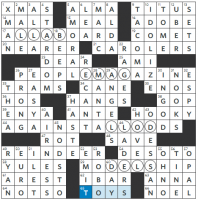 17A: ALL ABOARD [Conductor’s cry], which hides LLAB (BALL)
26A: PEOPLE MAGAZINE [Mia Farrow was on the cover of its first issue], which hides EMAG (GAME)
44A: AGAINST ALL ODDS [Despite the likelihood of failure], which hides LLOD (DOLL)
59A: MODEL SHIP [Item with a little bow on it], which hides DELS (SLED)
65A: TOYS [The four gifts in the circles, e.g.]

The title “Gift Returns” really helps us here (and would probably be an in-grid revealer in venues that don’t use titles): each set of circles in the theme answers contains a common holiday toy backwards (thus, “Gift Returns”). Clever! I really appreciated that the toys were all the same length of letters and spanned the words in the theme answers. I also enjoyed the bow wordplay in the clue for MODEL SHIP. Finally, some credit to cluing PEOPLE MAGAZINE with respect to a woman – I often give puzzles grief for not including more women, so this was nice to see! The only tiny inelegance to this theme set is the duplication of the word ALL in the first and third themers. Otherwise, an enjoyable holiday solve!

I also really enjoyed all the Christmas-themed cluing, but I can see how folks who don’t celebrate Christmas could get annoyed at the abundance of Christmas-related cluing in this grid. Even still, I enjoyed the [Santa’s team] and [One of Santa’s team] pairing of REINDEER and COMET. We also have YULES, NOEL, XMAS, etc. to round out a festive grid. Merry Christmas to those who celebrate it and happy holidays / a lovely end to the year to everyone! 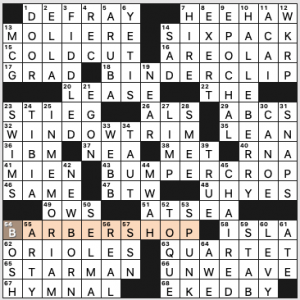 Quick recap tonight since it’s midnight and I was out all evening with old friends. Theme revealer is the two-part BARBERSHOP / QUARTET, and there are four themers that end with nouns that double as verbs that would be at home at a barbershop: COLD CUT, BINDER CLIP, WINDOW TRIM, BUMPER CROP.

Top fill: SIX-PACK (have you seen the recent thirst-trap photos from Kumail Nanjiani’s social media? he’s been working out insanely for his part in a Marvel movie and there are six-pack abs), HALLE BERRY. Less keen on AREOLAR, plural ALS and OWS, “UH, YES,” UNWEAVE, SMEE.

Weird clue: 13d. [Director of 2000’s “Charlie’s Angels,” to film fans], MCG. Uh, this is his professional name. It’s in his movie credits. It’s how he’s listed on IMDb. It’s not just a “fan” thing to call him McG. Hardcore film fans are probably the only ones who could tell you what his birth name is.

3.25 stars from me. I might have liked the theme better in a venue with puzzle titles, with “Barbershop Quartet” as a title and a solid set of four themers set amid super-smooth fill. 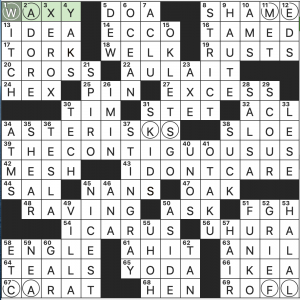 Time for a geography lesson! This played almost like a themeless, but the circled letters contain state abbreviations for five states, and the clue in the middle of the puzzle ties it all together:

There are the state abbreviations for Washington, Maine, California, and Florida in the corners, and Kansas right near the middle. Is there even another option in the SE corner than [“Hilarious!,” online] ROFL? Very well done, and nice and easy for a holiday week! 4.3 stars.

Just a couple of points:

I will stop there. That is all for this week’s Jonesin’! 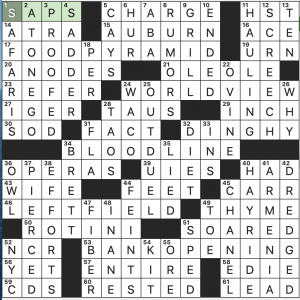 Sometimes it is hard to figure out what ties theme entries together in a puzzle. This is one of those times, but the revealer theme entry ties it all together:

This is referring to the phrases food bank, World Bank, blood bank, and Left Bank. This type of theme makes for a nice solving experience. Mark’s puzzle are always a joy, but this little wrinkle of trying to figure out what is going on is almost like a meta puzzle feel. Only not nearly as hard! It is, after all, only Tuesday! 4.2 stars for this one.

THEME: The word CHOP is “CHOPped” in three rows of the puzzle.

We’ve certainly seen the breaking of words in rows before, but I really liked this one a lot. I think because the revealer is so snappy and fun with its APT repetition and onomatopoeic nature.

These types of puzzles seem light on theme, but they’re not. Quite the opposite. So filling them can be tricky. The fill here is fine though. Nothing to scowl at. I especially liked KA-CHING! and POT PIE.

Got hung up for a few moments in the NE. For some reason, I stumbled on [She/___ pronouns]. I really wanted HE, I guess. I never heard the phrase “She/HER pronouns,” and laughably, I struggled to infer it. Duh. Didn’t know AT HOME for [Where charity begins] and the clue for PEEVED [Very annoyed] felt off, since I think of PEEVED as “somewhat annoyed.”