Going by the DoaCF database, this is Johanna Fenimore’s WSJ debut. Congrats! Her only other byline on record was a NYT grid from 8 years ago! That’s quite a gap. Here’s hoping she can get more grids in front of our eyeballs more often.

She, along with veteran puzzlemaster Jeff Chen, brings us a cute letter-change theme based on the premise of a visit to the gas station where we might go from E to F: FUEL UP  (52d, [Go from empty to full, and a hint to four squares in this puzzle]). 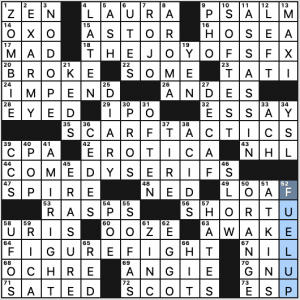 Overall, a nice premise and solid execution. One missed the mark for me (by just a little), but maybe it works just fine for you and plenty of other solvers.

With Jeff involved, you can be assured the fill has been scrubbed squeaky clean. We get nice entries ASSASSIN, ZOMBIE, NO DOPE, AM I RIGHT?, and ERASURE clued [How to get the lead out]. We would also have accepted [Duo who gave us “A Little Respect”]. 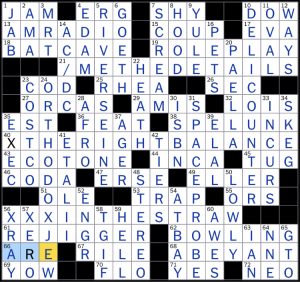 I had the weirdest sense of deja vu from this Thursday’s NYT, and a quick Google search couldn’t resolve why.  I feel like I’ve seen the exact same style of theme before, but can’t place where.

We’re going BOWLING in today’s grid, or that’s at least the key to filling the grid with its requested answers:

Using bowling scoring to parse these, we have (SPARE) ME THE DETAILS, (STRIKE), THE RIGHT BALANCE, and (TURKEY) IN THE STRAW.  It took me a little longer than usual to grok what was going on, though I stared at ABEYANT forever thinking I had something wrong there.  It’s nice the way the slash works with AC/DC, and I like the long entries running down the grid – RIVER SEINE, DELI COUNTER, ORTHODOX JEW, and SPACE PROBE are all nice bits of fill.

It’s still Christmas here, so I’m leaving it there.  Enjoy the rest of your holidays, and see you next year!

I’d give this puzzle a thumbs up. I think I’ve seen this idea before, but I don’t really tire of interpreting wacky phrases and sussing out what’s happening. It was very hard for me to see the first themer because for some reason, I didn’t have the K filled in and wanted the word NOW standing alone at the end of the phrase, but that figured itself out.

A bit of inconstancy as MEME still maintains the pronunciation of the base word ME. That’s also the only entry that really doesn’t change its grammatical integrity. The others, like LOOK FORWARD TO / LOOK FORWARD, TOTO!, result in a completely different type of phrase. Those aren’t the types of things that bother me, yet I know some people are sticklers, so I feel the need to acknowledge it. 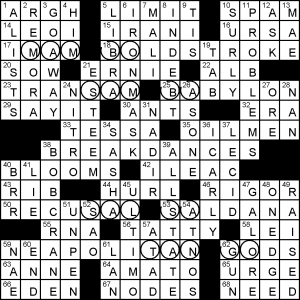 The opening corner starts out in such an ugly fashion. Weirdly-spelt ARGH and LEOI cross unlikely-to-pluralise ALISTS in what seems a quiet corner. My first thought was that this is either just lack of care or the theme is putting unusual constraints on the puzzle.

As it happens, the theme is in places one wouldn’t initially suspect. BREAKDANCES is implying we BREAK DANCES, not in two parts of long answers, as is the typical fashion, but between two grid entries. I’ve added circles to the grid so the dances can be read more easily.

The two top and bottom middle stacks also feature answers to avoid. IRANI is not in any way standard on the top. The bottom features AMATO who is no Steve Lukather, strange plural abbreviation ATNOS, and technical ULTIMO all in one tiny area.