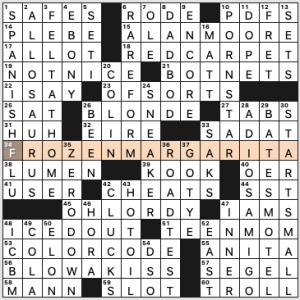 Lots of goodies in this 68-worder. I think I have a STYE in my eye, so lemme be brief and go get another hot compress.

Did not know: 58a. [Golfer Carol who won the 1965 U.S. Women’s Open], MANN. Not sure I know the names of any women who won golf tournaments before I was born, while SNEAD has been in crosswords for decades. I blame the patriarchy.

Fave fill: ALAN MOORE (my husband was among the many who marveled at how good the recent HBO adaptation of Watchmen is); RED CARPET; FROZEN MARGARITA (make mine on the rocks, with triple sec, no salt); “OH, LORDY”; TEEN MOM; BLOW A KISS; SPANISH FLU (my grandma lost her little sister to it); FELT AT HOME; RARE FORM; BATES MOTEL; START SMALL (advice to budding constructors: Start small with your theme! Don’t try to wrangle five or more theme entries when you’ve never even filled a grid before). 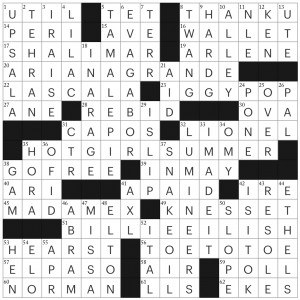 Well, it appears I have been remiss in my reviewing duties, as the New Yorker has been publishing daily all week and I’m only just now noticing (but I have the flu, so I think that counts as an excuse). Every day this week they’ve released a “Year in Review” puzzle, and today’s is “2019 in Music,” featuring entries and clues that highlight music and artists from the past year.

That’s a lot of theme material! Of course, there is so much to draw from when your theme is an entire year’s worth of music, which makes doubling down on ARIANA GRANDE a somewhat odd choice (not unlike her “7 Rings” tattoo, but I’m not here to make fun of popstars).

The fill is definitely not a clean as we’ve come to expect from New Yorker puzzles, but that is of course what happens when you introduce one of those pesky themes into a grid. That said, I’m not convinced that the fill we get here is truly the best it could have been, even given the themedness of the puzzle (UTIL at 1-A being the worst, but also LLS, ANE, ITAL, REBID, OFID, etc). I did lol @ the clue on LLS (“Cool J, et al.”) for its utter absurdity. Cool J, Bean, and … all those other LLS.

Fill aside, I enjoyed this trip through 2019 music. Several stars for a star-studded puzzle! 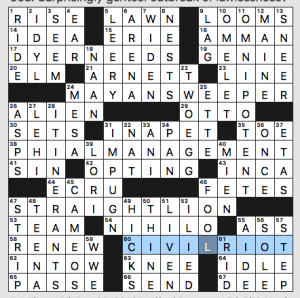 It’s a cute theme idea that doesn’t quite pan out.

What I didn’t know before I did this puzzle: I’d never heard of ARNETT Cobb, and I didn’t know that the KNEE was the largest joint in the human body. That didn’t seem relevant during anatomy class, and I am so not an orthopedist.