I didn’t catch on to the theme until after I finished, so I just solved this as a(n enjoyable) themeless. But it turned out to be a simple synonym theme where the final word of each theme answer is a synonym for “fall.” 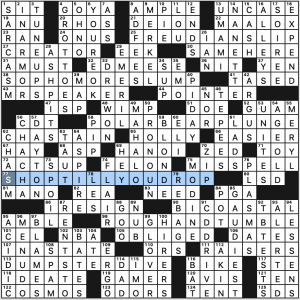 A fun and lively set of entries. I enjoyed every one of them.

Add to that fun fill like “SAME HERE,” MR SPEAKER, “I RESIGN,” SARCASM, “YOU’RE OK,” PI DAY, CHA CHA, MENUDO, MAALOX, MAHALO, COSMOS, GROTTOES, and of course GUAM. There are quite a few proper names, but most of them I liked seeing: Fashion designer NANETTE Lepore (I don’t know her, but one of our neighborhood friends when my sister and I were kids was named NANETTE), Angela MERKEL, Jessica CHASTAIN (I don’t know her either, but I do know iconic Brandi CHASTAIN, who is probably the only person who will ever have a sports-bra-wearing statue dedicated to her), Matthew MODINE, and Donald GLOVER. I’m not so keen on HIRERS, RAISERS, RENTS TO, SDS, and the like, but the sparkly entries—and the fresh cluing—overcame them.

Speaking of which, these clues I note:

Simple theme, but lively and well-constructed. Fun fill and clues round things out. 4.1 stars.

Okay, in the Wordplay column this newbie constructor tells us he was making Sporcle quizzes at age 10. I approve! (If you enjoy trivia quizzes, check out Sporcle.com. If you sign up for an account, tell ’em Amy_Rey sent you. If 15 of you do that, I can earn a valueless badge!) 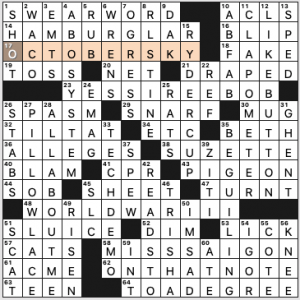 This is a solid themeless grid, on the easyish end of the Saturday spectrum, and it didn’t play like a beginner’s first published puzzle. I like the top stack of SWEAR WORD, the HAMBURGLAR, and the young Jake Gyllenhaal movie OCTOBER SKY. Also nice: “YESSIREE BOB,” “ON THAT NOTE …,” RYDER CUP, SNARF, the LIKE BUTTON, and a TECH DEMO. There really isn’t any bad fill. You’re off to a great start, Adam!

Most alarming entry: 48a. [Potential cause of the apocalypse], WORLD WAR III. Who could know how much that phrase would be heard this week when the puzzle was edited last week or whenever? 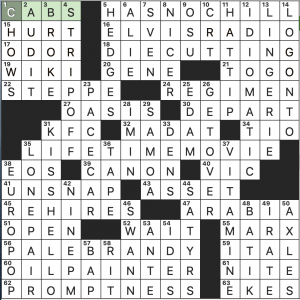 Frequent Stumper constructor Matthew Sewell has the LAT challenge puzzle this Saturday. Perhaps that is why it took me over 10 minutes to solve this! I wasn’t in a great hurry, but still this was a challenge. I need to get in speed mode with the tournament coming up in under three months. Matthew Sewell: are you attending the ACPT? It would be great to meet you. This is another stellar puzzle. 4.5 stars. 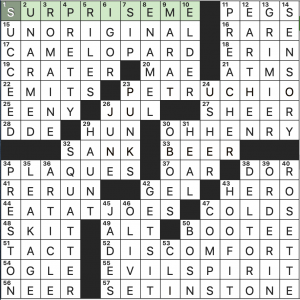 I clocked a time of 13 minutes for this one, which is about my average for a Stan Newman Stumper puzzle. (Yes, Anna Stiga is really Stan – anagram of “Stan again”) I am still not good enough for the stage at the ACPT (which is coming up!), but I am steadily getting these Stumpers done in under 20 minutes, which is an improvement for me. Maybe I will find a book of old Stumpers and go to work! 4.4 stars for this one. 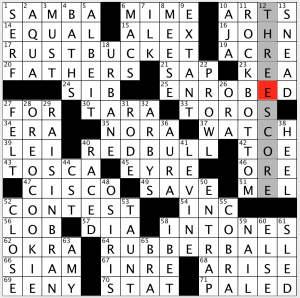 Feels like there must be a bajillion phrases that follow this formula, but this set is just fine. My favorite of the group is RUST BUCKET because it’s fun to say. I wouldn’t mind a replacement for RUBBER BALL as it sticks out as being boring and generic in comparison to the rest.

Nice to see OREO COOKIE in its entirety make it into the grid! Oddly, it’s both adjacent to and the same length as a theme answer, which is kinda weird, and it’s symmetrical partner is THREE SCORE, which doesn’t strike me as a thing (why not TWO SCORE? or FOUR SCORE? At least FOUR SCORE was famously used in the Gettysburg Address!).

It’s an old fashioned theme type, but it works. Off to ENROBE something in chocolate now… (?)