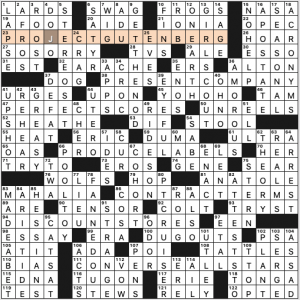 The “Stressed Out” theme hinges on changes in which syllable is stressed, changing the usual pronunciation of a familiar phrase to change the meaning:

English is such an oddball and interesting language, isn’t it? Do other languages offer extra pronunciations for various meanings of words that are spelled and derived the same?

Will’s a terrific constructor, so we get a lot of good fill here. I liked seeing MAHALIA Jackson, UPSHOT, POOL TOY, FANNED OUT, GET THE NOD, GIRL SCOUT, and ACRONYMS. I don’t recall hitting any fill that would trigger the ol’ Scowl-o-Meter. In a 21×21 grid, there’s usually some crap fill, but this one played fair.

Four stars from me. And by the way, Will N. edits the Spyscape crossword. Spec sheet available here (in the Crossword Puzzle Collaboration Directory group on Facebook, which is aimed at diversifying the ranks of constructors and offering mentoring to women, people of color, etc.). Will notes, “Just a reminder that the weekly Spyscape crossword, which I edit, encourages submissions from constructors belonging to underrepresented groups!”

David Kwong is the cruciverbalist and magician whose one-man show “The Enigmatist” sounds like great fun – I haven’t seen it. I really wanted to like this puzzle. I did not.

Unless I’m missing something, the whole deal with the theme is that each three-word theme answer contains its initials in sequence. Two of the phrases are commonly referred to by their initials. The rest are not, at least not that I know of. It’s a thin concept to build a theme around and it wasn’t a whole lot of fun to solve. There are circles to show us the relevant letter string. 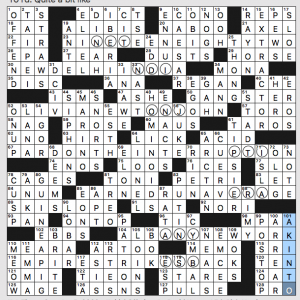 What I didn’t know before I did this puzzle: that Paul ANKA sang “Lonely Boy,” that’s there’s a national Chiang Kai-shek Memorial Hall in TAIPEI, and that Hauskatze is German for cat.

After 213 consecutive fresh weekly offerings, the note on today’s puzzle tells us that Evan is on a brief respite. So we get a re-run today, which is still likely to be a new puzzle for many solvers (me included!).

THEME: Phrases that include food items reimagined as if they’re recipes

A quick search of our humble site didn’t turn up any review of this puzzle. So it appears that it’s new for us too! I certainly don’t remember solving it…

Anyway, it’s a fun theme that’s presented fairly consistently (sometimes the meaning of the food changes from the base phrase meaning, like DATES or TOAST). I like the two word phrases, and I enjoyed figuring out one of those two words without any crosses and letting the other half reveal itself.

It did feel heavy on names. I don’t know if I’m imagining this or not, but it feels as though both the fill and clues are a little more stiff than usual. Perhaps evolution after four years of constructing 21x puzzles on a weekly basis? Or am I coming at it with a bias knowing that it’s an older puzzle?

Nothing much else to say here! Back to work for me tomorrow… and the pile of papers I was supposed to grade over the last two weeks hasn’t gotten any shorter. Enjoy your Sunday!

Seven theme answers in this!

I didn’t see the theme until after I filled the grid, so I solved this as a themeless essentially. I don’t think I’m alone in that regard… those tattoos are pretty well hidden! Especially without circled letters as a crutch!

Even with all that theme, the word count is relatively low at 74, and there’s still some exciting fill like BEAT POET, TEASER AD, COME AT ME, and POLITICO.

The clue for 26D [20 in a school zone, say: Abbr.] felt very off to me. Is the answer MPH a viable substitute for the clue? 20 MPH is the speed limit, yes. But “20 in a school zone” can’t really be replaced with MPH imo. I dunno. Just weird to me.

New to me were LIDO, ULTRON, BAYH (name rings a bell, but heck if I knew the spelling)  and T TEST. And there’s a bit of sacrifice in the fill with things like IS SO, SHO, and ALL’S … but nothing egregious.

This entry was posted in Daily Puzzles and tagged David Kwong, David Steinberg, Evan Birnholz, Will Nediger. Bookmark the permalink.