I really enjoyed this crossword, which has the light touch needed for Monday and a theme that kept me interested. It’s also a missed opportunity. More on that later.

The theme answers are all memoirs by US First Ladies – a lovely twist on a President’s Day theme. It’s Sally Hoelscher’s debut and I hope to see more from her! 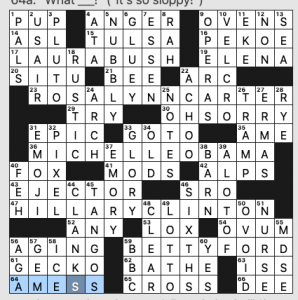 A distinguished roster of accomplished women, whatever you think of the books. The only one I’ve read is “Becoming.”

The missed opportunity: this puzzle more than passes the crossword Bechdel test. It smashes through the barrier. I went through looking for men’s names with mounting excitement: what if there weren’t any? Wouldn’t that be cool? Then I got to 66a, which I filled in with crossings. It’s DEE. That could be clued a woman’s name, or a letter, or a grade. Instead we get [Actor Billy ___ Williams]. Sigh.

What I didn’t know before I did this puzzle: the name of Laura Bush’s memoir. 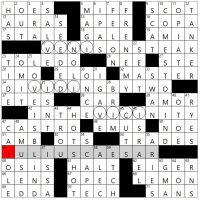 20A: VENISON STEAK [Deer hunter’s dinner, perhaps] – VENI
34A: DIVIDING BY TWO [Cutting in half, in math class] – VIDI
42A: IN THE VICINITY [Nearby] – VICI
56A: JULIUS CAESAR [Attributed speaker of the circled words]

So, kind of a quotation puzzle, but with VENI, VIDI, VICI hidden within the three theme entries. A cute idea, though I might have preferred if the V-words spanned two words in the themer, like VENI hidden in “graven image” or something like that. I did like the bonus in the VIDI (“I saw”) clue – the visual of sawing something in half was nice. Also, bonus points for FRENEMY and an otherwise decent solving experience.

HALT! Can we point out that there are more despots/dictators in this puzzle than there are women?!?! We have cruel despot Idi AMIN and Cuban dictators Fidel CASTRO and Batista vs. ISSA Rae. That’s it. If I want to be generous, we can also include Lola from her COPA, bridal NEE, and STE Marie. Okay, there are barely more women in this puzzle than autocratic leaders – that’s wild to me and I can’t not mention it. Actually, it’s a tie because the puzzle’s theme is hilariously and appropriately about JULIUS CAESAR seeing and then taking whatever he wants. Oof.

What is there to say about a Patrick Berry themeless that hasn’t already been said? This puzzle is impeccable. It felt a tad easier than most New Yorker Mondays, but no complaints about that! 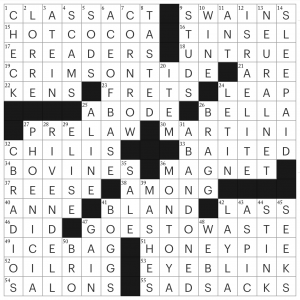 Here are some highlights:

Overall, the fill is flawless, the long entries are solid and interesting if not sparklingly new, so this puzzle gets almost all the stars from me.

Hard to gauge this one since I’m in a bit of a hurry, driving from Chicago back to New York and solving this in a travel plaza over a greasy breakfast sandwich. Set Across Lite to “Automatic Solution Checking” so you can see my many stumbles in this one while solving (about 1/3 of those were just careless typing, but still!).

Lots of bite in this one! 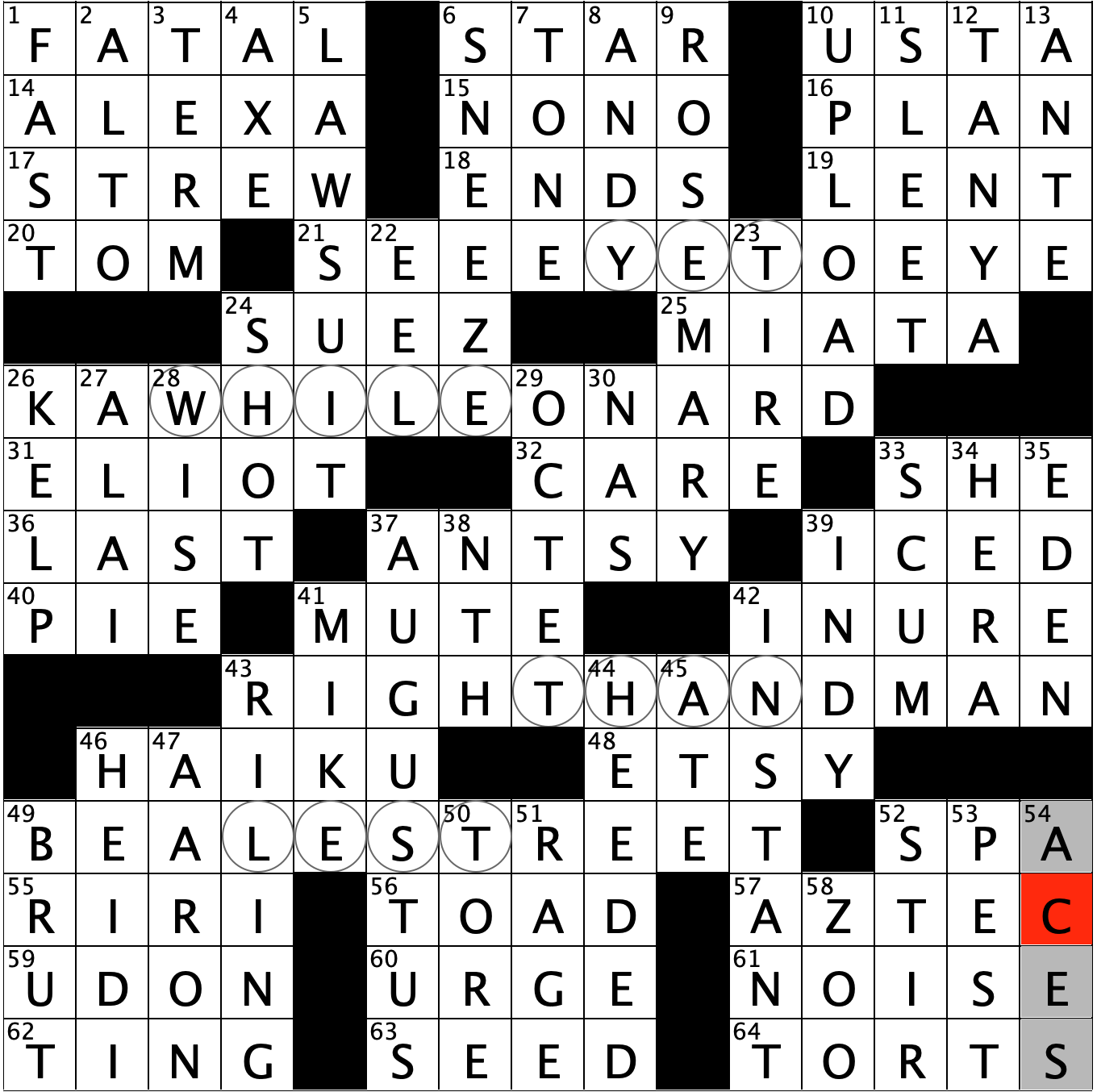 Excellent theme answers in today’s puzzle – with a fun link of the conjunctions falling in the center of multiple words, linking them together. BEALE STREET was the easy one for me here – with it’s namesake movie one of my favorites of 2018 – while I needed almost every cross for KAWHI LEONARD – but every one was fair. I also enjoyed the triple E in SEE EYE TO EYE. With a title like this one, how could I not think of Schoolhouse Rock?

Really smooth fill as well throughout the puzzle. There were no sticking points and a nice flow to the answers throughout. Clue of the day for me goes to RIRI [Queen Bey : Beyonce :: ___ : Rihanna].