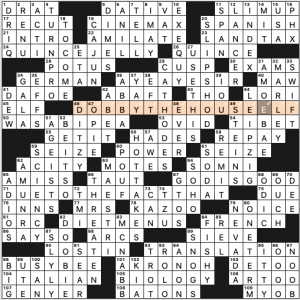 Sam deliberately includes a bunch of duplicative entries, featuring phrases with words that double as foreign names of numbers, and also dropping the number words in the same row of the grid, and including the language nearby (in symmetrically placed slots):

Did not know: 1d. [Title host of radio’s first major quiz show], DR. IQ. Rough to have an old and unfamiliar thing parked at 1-Down, but it was relatively inferrable.

Four stars from me. How’d things go for you?

I’m on call. It’s 8:00 PM on Saturday and so far today I’ve taken over 20 phone calls, done five home visits, and driven nearly 200 miles. It’s possible my reaction to this puzzle has more to do with my day than with the puzzle.

Each theme answer has an anagram of HORSE somewhere. I didn’t realize this until I got to 102a [1971 Stones hit, or what can be found in the answers to starred clues]: WILD HORSES. 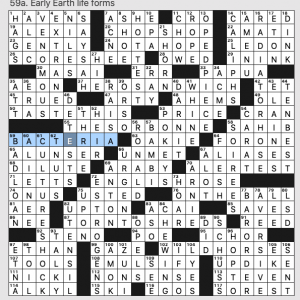 I didn’t realize until I highlighted the answers that each HORSE crosses two words. It’s a solid theme. I don’t care for anagrams and, as I said, it’s been a long day, so I suspect other people will enjoy it more than I.

What I didn’t know before I did this puzzle: that Crayola changed FLESH color to “peach” in 1962. I was born in 1960 and I could have sworn I remembered seeing it as a kid.

Quite the picnic we’re having with the takeout we ordered from this puzzle!

THEME: Menu items are removed from common phrases and placed elsewhere in the grid. 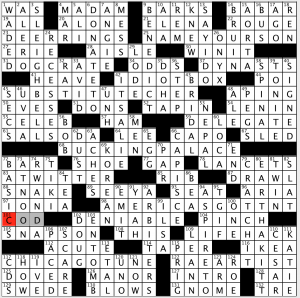 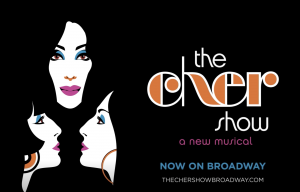 All of the foods/beverages that have been “taken out” are clued in the grid as [Food/Drink taken out of X Across].

So what’s on the menu? 1 EGG, 1 RIB, some ALE, HAM, a cup of TEA, POI, and some COD. Sounds like some stoners got the munchies and ordered one item from every eatery in a two block radius!

I feel like this puzzle originally wanted to be called “Takeout Food,” but alas TEA and ALE crept in, so “Takeout Menu” seemed a little more inclusive. Still, I don’t much picture places that serve takeout fielding orders of ALE to-go (okay, okay… I know those microbrew places will fill up your growler!).

Laugh out loud moment for me was realizing a single RIB had been ordered off the takeout menu. It very much reminded me of this hilarious Chris Rock clip from his early days in the movie I’m Gonna Git You Sucka:

Other foods/beverages are elegantly absent from the rest of the grid (unless of course you’re into barbecue RAT).

I enjoyed this one! And now I’m ready for breakfast. I think I’ll eat in though. And no ALE just yet.

THEME: Letters are sounded out at the beginning of two word phrases that punnily reference the clue. 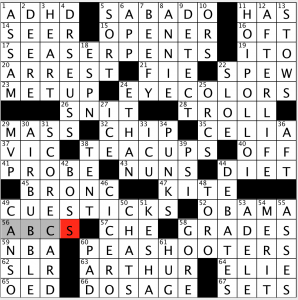 Cute theme. Seems like somebody ran the dictionary in order to find synonyms for CUP and STICK that began with the appropriate letter. And why not just go with “P”hotographers in the clue for 60A instead of “P”aparazzo (since we’re clearly trying to avoid mention of guns).

Nice to see HOI POLLOI as a whole in the grid instead of just HOI. AIR BUBBLE, SCORE CARD, HOI POLLOI, and AFTERLIFE were all very nice. Sure, they’re the same length as a couple of the theme answers (longer than one!), but presented as downs side-by-side you don’t much notice (i.e. there’s no chance of confusing them with theme answers).

Let’s take this crossword for a spin!

THEME: Six letters in the grid are “rotated” out of their proper theme answers and into another, to create wacky phrases. 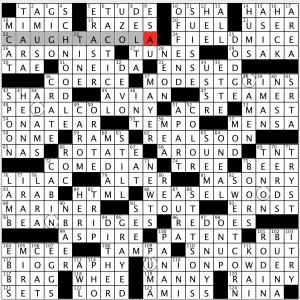 This was cool enough. Feels like it’s something I should’ve seen before, but I don’t think I have! Simple to grok and adds a little spice to the “change a letter” theme. I like that the circled letters form a circle themselves in the grid… very satisfying, and it adds a layer of impressiveness to the construction.

I am curious as to how this puzzle appears in print. I can’t find it on the internet. Please, please, please tell me it doesn’t ask the solver to count letters in order to find the one that should be circled… (something tells me it does).

If it does: For shame. Stop it, Universal. Stop running circle-dependent themes, especially with the circles are visually necessary to appreciate the puzzle.

If it doesn’t: Woo hoo! Welcome to the party! The puzzle that boasts it “…sets the standard for all daily puzzles” has arrived fashionably late!

My only nit (besides my usual Universal-can’t-circle-necessary-letters nit) is that ROTATE AROUND doesn’t strike me as a stand-alone phrase, and it’s certainly risky as a revealer. Other than that, cool beans.

1.5 Stars for any version that may appear without circles.