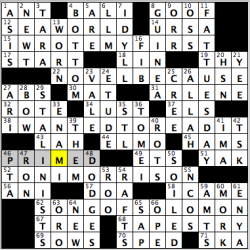 Hello everybody! Hope all is well with you to start the relatively new week!

We are in the middle of Black History Month, and today’s grid is a tribute to one of the great writers our world have ever been blessed with, TONI MORRISON (52A: [Nobel Laureate and author of quote who was born 2/18/1931]). As part of the tribute on what would have been her 89th birthday, there is a quote of hers that features as the first three theme entries to this grid.

Despite all of the commercials I’ve seen and the multiple times I have made it to both Orlando and San Diego, I have yet to find my way to SEA WORLD (12A: [Theme park with flamingo-shaped paddle boats]). There’s a chance that I like the phrase as a crossword puzzle entry as much as I would like being there in person, if and when I ever make it there. I did not read Garfield in the comic strips as much as I saw the animated series Garfield and Friends in the late 1980s and early 1990s, I cannot recall if that specific show ever featured ARLENE in them (31A: [Garfield’s girlfriend]). I don’t think so, but my memory fails me enough times to know that I could be wrong. Definitely felt some serious good vibes when filling in FAT TUESDAY, since 1) I was just in New Orleans this past December and, 2) being in New Orleans in 2002 for the Super Bowl and Fat Tuesday was one of the most memorable times of my entire life (11D: [Mardi Gras, in other words]). In terms of breathtaking places, can someone make a trip to BALI happen for me (4A: [Island near Java])? OK, time to leave before I start daydreaming and I totally lose focus on here.

“Sports will make you smarter” moment of the day: TARA (3A: [“American Pie” actress Reid]) – On the list of the all-time great college basketball coaches ever, it sometimes boggles the mind that Stanford basketball coach TARA VanDerveer does not get as much love as some others on the list. (The whole being on the West Coast doesn’t help things.) VanDerveer, who has led the Stanford women’s basketball team since 1985, has currently racked up an astounding 1,090 career victories, which means that she has a real good chance of overtaking Pat Summitt for the most D-1 wins in women’s basketball by the end of this college basketball season! (Summitt ended her career with 1,098 wins). Along with winning national championships with the Cardinal in 1990 and 1992, VanDerveer led the U.S. Women’s Olympic Basketball team to the 1996 Olympic Gold Medal in Atlanta. Tara was inducted into the Basketball Hall of Fame in 2011. 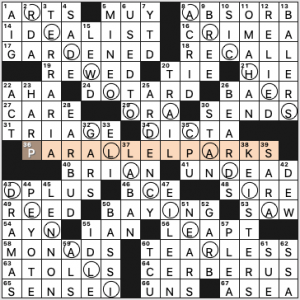 It’s a neat theme, with the PARALLEL PARKS revealer (36a. [Does a driving test task – or an apt description of the five circled diagonals in this puzzle]) obliquely explaining the shaded diagonal words. Those five diagonals are ARCHES, ACADIA, REDWOOD, GLACIER, and DENALI, which are all national parks.

Now, most parallel parking doesn’t at all involve any diagonal action, just cars parking parallel to the curb rather than to each other. So the revealer is a little off-kilter. It might have been nice to run the park names as Across entries, still parallel, using parks whose names can be clued as other things. ARCHES and GLACIER are two that lend themselves to that approach.

The down side of a theme with 33 squares’ worth of diagonal entries is that you’re forcing three-way checking of a good chunk of the grid, and you end up with too many compromises for my taste. While I do like DOTARD, UNDEAD, CERBERUS, PEYOTE, and KEISTERS, there’s also junk like ARDENCY (the noun we use for that is ardor), TEARLESS, and an excess of names (I think I counted 15!) and abbreviations. I wasn’t paying any attention to what was in the unclued diagonals while I was solving, so the effect was of working on a crossword with no theme other than “compromised fill.” 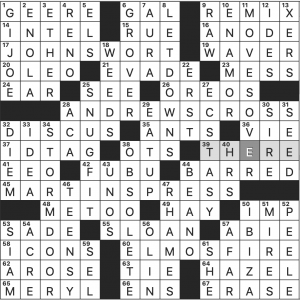 The theme idea was readily evident here after getting the first thematic answer, and then it was time to sit back and be entertained by how the others played out. Here are the theme answers:

So we have famous “St. [blank]” phrases with the St. part removed. 45A should be quite familiar to the crossword crowd! As is usually the case in Jonesin’ crosswords, I find myself trying to think of other answers that would fit this theme. I trust Matt has found the best ones! As we return to regular thematic fun after the 2010s decade review, we start back off with a bang! 4.4 stars today.

Back next week with another Jonesin! 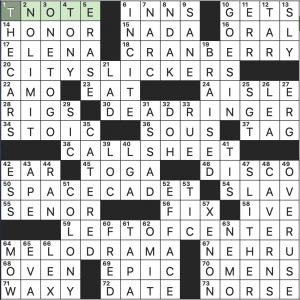 Definitely couldn’t figure out the theme here without the revealer!

So we are dealing with city center, dead center, call center, and space center. I guess that is as in the NASA Space Center Houston? I think that is what it is called. I am not that familiar with the name, but I couldn’t tell you the last time I saw a space launch. The only launches I know now are Elon Musk’s SpaceX exploits! Having said that, this was a decent puzzle. As stated, there is a nice “a-ha!” moment when you have no idea what ties the long answers together, and then everything in the end ties together like a nice neat bow. 4.2 stars.

That odd moment when the title actually made it more difficult for me to determine the theme.

THEME: The first words of the theme answers are synonyms for “down” (in three different senses of the word).

Took me 3:30 seconds to solve the puzzle, but I stared at it for much longer trying to figure out the theme. I was sure it was duck/bird related. I mean, I saw the feathers/down connection and looked at the title, so I spent the rest of my thinking time trying to figure out if there was a BLUE duck or an EAT duck. How absurd! Side Note: “Blue Down” googles quite well in the context of bedding!

So when it finally became clear, I was left wondering about the title. I still don’t really get it. It doesn’t seem to envelop all of the themers equally, or perhaps I’m just reading it wrong.

Still fun to solve, and I love me a good forehead slap moment!

Let’s go “Behind the Scenes” with today’s fantastic constructors: 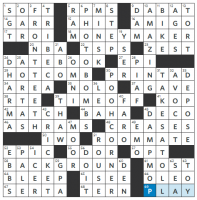 18A: MONEYMAKER [Cash cow, for example]
24A: DATEBOOK [Portable appointment calendar]
39A: TIME OFF [Vacation and sick days]
51A: ROOMMATE [Fellow freshman you meet on Day 1 at college]
58A: BACKGROUND [Inconspicuous location]
69A: PLAY [Word that can precede each half of the starred answers]

Each word of each theme entry can begin with the word play: play money, playmaker, play date, play book, etc. I’m always really impressed with themes like this, when constructors are able to find phrases where both words work toward their theme goal, and Amy and Joanne do a fantastic job of finding a nice theme set of everyday words that work quite well. I’m not sure how the title relates – is is that you can go “Behind the Scenes” at a play? Let me know what I’m missing in the comments below!

Other random thoughts:
– I really enjoyed the lively central down entries of PHOTOBOMBS and POOH CORNER.
– We had some nice pairings in the grid, with birds TERN and AVOCET, modifiers EPIC and AMAZING, and DHARMA and ASHRAMS.
– Aside from our AMAZING constructors, which other women do we have in today’s grid? Teri GARR, Edith PIAF, and LEA DeLaria. A small mix, but having two women constructors definitely represents more than any number of women in the grid. Enjoyed the smooth solve of this puzzle and am excited to see more from Amy and Joanne!