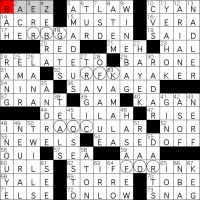 hello and welcome to episode #611 of matt gaffney’s weekly crossword contest, “AKA”. in this week 2 puzzle, the instructions tell us we are looking for a noted 20th-century American. okay, what are the theme answers? there are four long acrosses, and some of them are pretty weird:

in addition, there are some clues scattered throughout the grid that clue famous people by their last name only, and with seemingly deliberate ambiguity. four of them are symmetrically placed:

the title clearly hints at the other people who might fit these ambiguous clues, but it also suggests initials, so i was thrown by the possibility that we needed the initials of these people: jerrold lewis nadler, hiram ulysses grant (his initials at birth were HUG! aww…)/ulysses simpson grant, daniel ken inouye… but elena kagan does not appear to have any middle name. hmm.

it took me way too long to see the next step: hidden in each of the long theme answers is a trigram that is the monogram of a very famous person who fits one of these ambiguous clues:

and … then what? i have to admit, i thought it would be all over once i saw that step, since it’s only week 2. but i have to admit, i’m totally stumped. identifying those four people known by their initials has revealed … nothing. i can’t really put their initials together to spell anything (nor did i really expect to be able to, since there aren’t all that many people known by 3 initials that matt could have chosen from). there’s nobody famous with the initials AKA (the puzzle title). it’d be amazing if there were somebody that fit all four ambiguous clues, but of course none of the current supreme court justices are also presidents who are on currency.

going back to the grid, if there were another long or centrally located theme answer containing an obvious monogram of a famous 20th-century american known by their monogram (like MLK or LBJ), i’d be satisfied with that. but there isn’t. so i’m stuck.

the two answers crossing in the center of the grid are {Pod of whales or dolphins} GAM, which is interesting because it’s three letters (although i couldn’t think of anybody famous with those initials), and {Worth something} OF VALUE, which is interesting because it has the unusual letter cluster FV; but i couldn’t think of anybody known by the initials OFV or FVA either. there are plenty of other three-letter answers in the grid, many of which are initials (CVS, AAA, AMA, LSD, IRL, NBA, etc.), but there is nothing non-arbitrary about picking somebody with one of those initials either.

i thought perhaps the 1-across clue, {Singer who performed at Woodstock while six months pregnant} BAEZ, might also be an ambiguous one, because (like the other ambiguous clues) it leaves off the first name and at least allows for the possibility that there might be another correct answer to that clue. but my research didn’t turn anything up.

i have one longshot: the first letters of the monograms, taken in arbitrary order (say, bottom-to-top in the grid), spell out FARR, which is the surname of noted 20th-century american actor jamie farr. this is highly unsatisfying on a number of counts, but i’m just not seeing anything else.

again: it’s only week 2, and 400+ people have solved this, so i must be missing something obvious. but i am, in fact, missing it, so … i dunno. maybe it’s MLK, because he was known by his initials? oh, and i guess kagan/inouye/nadler/grant (ordered by theme answer) spells KING. yeah, actually, that must be it. whew.