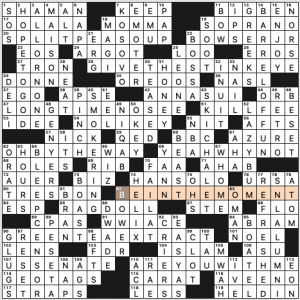 The puzzle’s title suggests “take a letter,” but that’s not what the theme is. The theme clues are all-caps words with a letter added or removed in such a way as to “dictate” the words in the answer:

Clever theme, and the theme entries are themselves pretty good fill.

THEME: The word ALL appears in ALL the theme answers 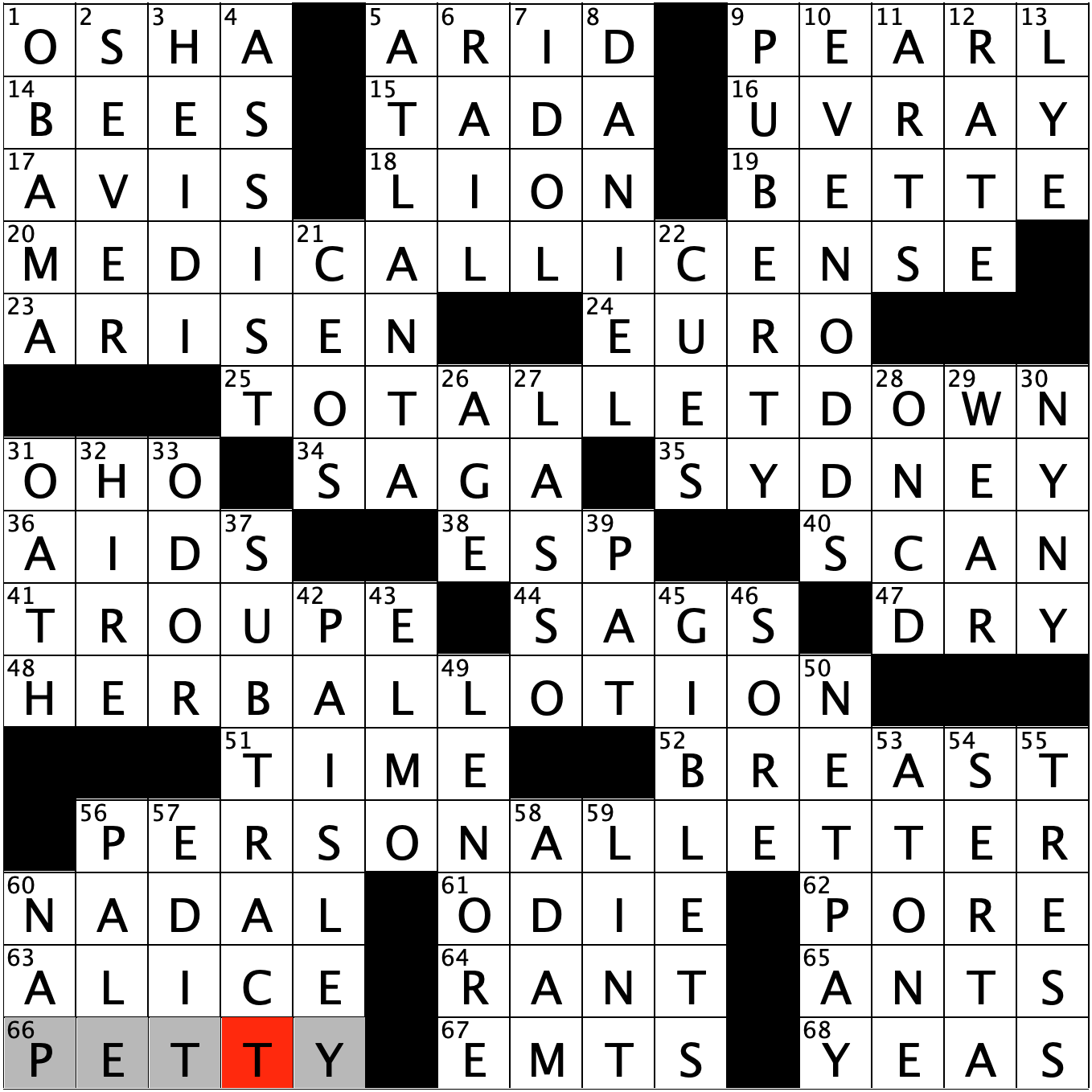 Perfect title for this light and fun puzzle. This was one time where after noticing ALL in the first two theme answers I actually went back to look at the title and got a good kick out of it. TOTAL LET DOWN was my favorite of the themers, with HERBAL LOTION on the other end of the scale, but they all work – and I liked the consistency of the AL – L split.

I don’t time my solves, but this one flew by and felt super speedy. Some really nice long downs kept the puzzle entertaining beyond the theme. PAISLEY & EVEN ODDS were fun to see – and once I got GIBLETS it was fun to see, but for some reason that is just a word that never sticks in my brain – no matter how many Thanksgiving dinners I assist with.

You all didn’t think I’d leave you without a BETTE Midler video did you? I know it’s the wrong time of year but I can’t help myself.

Much tougher than usual!

Once I got through and finally interpreted those unwieldy down theme clues, I very much enjoyed this. I wasn’t about to count rows though. I figured it best if they just revealed themselves, which they did. This is the kind of theme where figuring it out helps to solve other portions of the puzzle. For instance, I figured out the COBRA/DECKED pairing, which helped me to enter CODE for CODE SWITCH, which in turn cleared up some difficulty I was having with fill. Those are my favorite types of puzzles; when there’s a synergy of sorts between the fill and the theme.

I can see how this puzzle may eat at some who are trying to figure out the “three-piece” nature of the down entries or who aren’t making the connection as to why some answers are just plain “wrong” in the grid. It’s also confusing that all but one of the switched pairs have their first letters switched. So this is probably not a puzzle that’s for everybody, and it’s sure to addle a beginner solver. The added bite in the cluing all-around seems to recognize this and embraces its difficulty in comparison with easier WaPo offerings.

ELLA Baker, AMINE, MANAMA, ALEC Berg, and PESACH. There was also plenty of stuff that I’d heard of but didn’t know until a couple of key letters were dropped, like 39D [Lalomanu Beach nation] SAMOA.

This puzzle requires circled letters, which Universal is unable to do unless solvers come to this site and download the .puz file. Ironically enough, solvers that would know how to do that are less likely to need the circles. Newer solvers who come across this puzzle in print are missing the strong visual element and are likely faced with bizarre instructions as to which squares to pay the most attention to (I don’t know the specifics since I can’t find the Universal Sunday online).

The solution is simple: Universal should circle its letters when required like every other major publication does. But the puzzle that, per its website, “…sets the standard for all daily crosswords” does not.

Easy, fun puzzle to kick off Universal’s “All Women Constructors” month. And who better to get it started on a Sunday than Zhouqin “CC” Burnikel?

Nothing much tripped me up here. I was trying to determine whether one answer was STREUSEL or STRUDEL, and then STRUDEL popped up in the very next answer I looked at. Haha! My favorite mistake was for 26D [One may sleep while you’re out] LAPTOP. I was confident that my LAPCAT would also sleep while I was out.

I admit, I’m very biased when it comes to puzzles that, imo, need circled letters to properly be enjoyed, and knowing that this is appearing in newspapers all over without that element irks me. But that is definitely not the constructor’s fault.

I enjoyed the theme in this puzzle. The fill…..not so much. 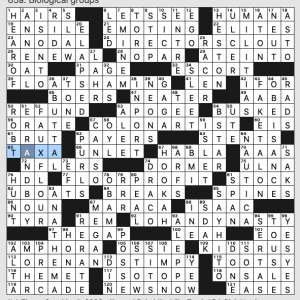 Solid, consistent, and fun – a good recipe for a Sunday theme.

Unfortunately, the theme is mired in some truly terrible fill. The NW corner has ENSILE and ANODAL, neither of which should ever see the light of day again. They should be buried alongside ABUTTAL. There’s the partial I FOR, abbreviations NEUT (for neutral), PREC (for preceding, which – what?) and ROBT (for Robert), and the annoying TER. Why clue UTE as the awkward name of a vehicle that’s usually called a sport-UTE rather than the American Indian nation of the same name? I could go on. I’d rather not. It was so bad that I didn’t even mind UNLET or IN E for [Like Vivaldi’s “Spring”].

I’m a dolt. These are theme entries. Thanks to the commenters who caught my mistake.

What I didn’t know before I did this puzzle: that “draconian” comes from the [Harsh Athenian lawmaker] DRACO (and that J K Rowling didn’t make up that name). I also did not know that a B–STAR is a [Bright, blue-white heavenly body]. Random letter + star is still not a great entry but at least I learned something.