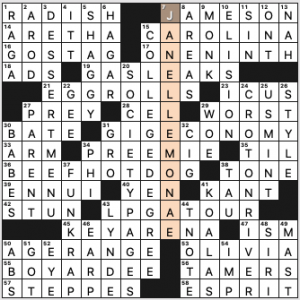 Lots to like in this not-too-hard Saturday puzzle. The opening corner stacks up a RADISH rose, the marvelous ARETHA, and GO STAG. JAMESON Irish whiskey, CAROLINA barbecue, GIG ECONOMY, PREEMIE (raise your hand if you were a preemie or have been a preemie parent), the LPGA TOUR (fun clue, [Skort circuit?]), Chef BOYARDEE (who on earth came up with that bastardized spelling?), a DESSERT MENU, JANELLE MONAE, and poor endangered KOALAS.

It’s getting late, so five things: 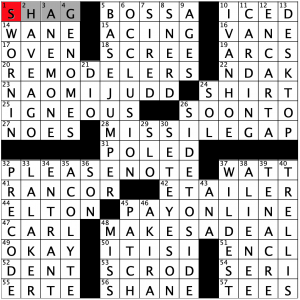 I don’t think I have ever had the pleasure of blogging on Leap Day, so here goes! Wide open grid in this week’s Saturday LAT challenger, but not a tough grid at all. Took me 5 minutes exactly to finish, and I think I had to hunt for a minor typo at that. Not that is wasn’t a fun puzzle, because it was! I am not too familiar with Michael’s puzzles, but evidently we must be on similar wavelengths. 4.4 stars from me today.

I will stop there! Next LAT review from me is Tuesday. 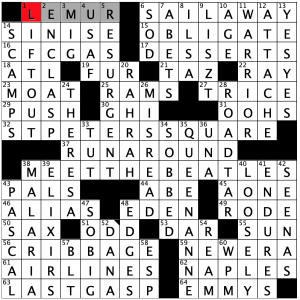 Not to easy on this Stumper from Stan, or “Lester Ruff” as we know him. My time clocked in at over 15 minutes, which is still not bad for a Stumper and far from my worst, but I still found this to be just a tad thorny. Probably because I had some wrong answers in there that caused all kinds of issues. I had several wrong letters in 38A (see below), even though I kind of thought I knew what the correct answer might be. Once those long answers in the middle fell, that was the hardest part, but it took a while. 4.5 stars for Stan today. 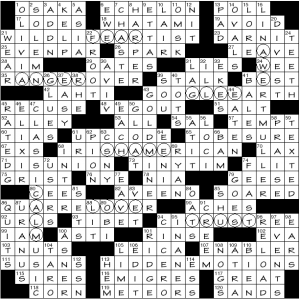 Lot on my plate today, so only time for a skeletal write-up.

In each case, the hidden word spans both elements of the two-word (or hyphenated) phrase of the entry.

Even though I’m in a hurry and there are plenty of positive things to say about the crossword, I feel compelled to mention the »clang« I got from 18a [Old riddle question] WHAT AM I and 99a {Conclusion for Descartes] I AM.

THEME: Foods that come from the pig. 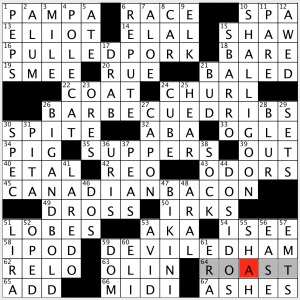 I’ve never heard of DEVILED HAM. Is that like Spam? Or is it a regional thing? We have Taylor Ham in the northeast, and I never realized it was a regional thing until I traveled and tried to find it on supermarket shelves elsewhere.

Anyway, I very much enjoyed this puzzle. Especially as an omnivore and a bacon lover. If you’re the same, there’s a fun restaurant in NYC that I highly recommend called BarBacon. Yum. The puzzle in general played a touch harder for me than most Universals, but that could be since it was the first thing I did after opening my eyes this morning. I did like SHALL I GO ON and BIG AND BOLD. Perhaps the latter isn’t as much in-language, but it’s fun to say.

I wonder how ROAST [Honor with insults] got away without being clued as a bonus answer of sorts!