For this month’s Fireball contest, we are asked, What food brand is this puzzle’s missing theme entry? 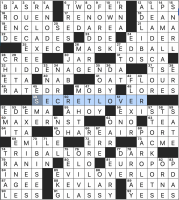 When there’s a “missing theme entry” sort of question, that usually means that the extant theme entries follow a certain pattern, and we need to find a thing that also does that same pattern thing. So, here are our themers:

Third observation: Since AGENDA isn’t HIDDEN in one of the other themers, we must be looking for something that hides AGENDA. From the flavortext, we know that we’re looking for a food brand with that letter sequence.

HÄAGEN-DAZS has a HIDDEN AGENDA 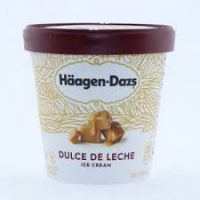 As you may know, Häagen-Dazs is a completely made-up brand name that means absolutely nothing in Danish, Hungarian, Klingon, or any other language. It is delicious ice cream (I feel no disloyalty saying that in Ben & Jerry’s country), particularly the Dulce de Leche, Coffee, and Chocolate Chocolate Chip flavors. And it is likely the most metal ice cream available, what with its “rock dots” or heavy metal umlaut.

I went down a long rabbit hole regarding the “röck döts” after solving this metal meta, and ended up listening to a bunch of Hüsker Dü. If there’s anyone who reads my posts who also has Photoshop skills (heck, if there’s anyone who reads my posts; sometimes I’m pretty sure I’m shouting about crosswords into the void, which is pretty damn metal itself), I’d love a mashup of a Häagen-Dazs label that says Hüsker Dü, with one of their album titles as the flavor (you’d think this had been done, what with GenX folk having time on their hands, but no).

Häagen-Dazs has lots of sugar, so here’s Bob Mould, formerly of Hüsker Dü, with his 90s band Sugar, singing what is probably my favorite song of all time:

This entry was posted in Contests and tagged Frank Longo. Bookmark the permalink.