Several crossword outlets are observing Women’s History Month by having a Women’s March (get it?).   I should learn to check for notes before I blog. Turns out there’s a note with this puzzle: “To mark the beginning of Women’s History Month, every puzzle this week (Monday to Sunday) has been made by a leading woman crossword constructor.” Thanks, janie, for cluing me in. Andrea Carla Michaels treats us to a puzzle that would be delightful in any month of the year. 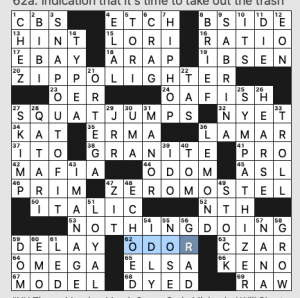 What I didn’t know before I did this puzzle: it’s a Monday puzzle. I got nothin’.

In case you haven’t seen Rebecca Falcon’s tweets (@rebeccafalcon18) about it, it’s Women’s Crossword March! Many outlets are dedicating the entire month of March to feature fantastic women constructors, so be on the lookout for those puzzles, many of which are world debuts. Check them out! Meanwhile, today’s LAT Monday puzzle isn’t by a woman, but let’s take a look all the same: 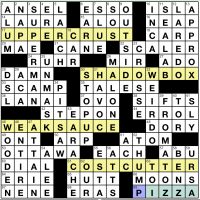 The last word of each theme entry can follow the word PIZZA: PIZZA / CRUST, PIZZA / BOX, etc. An okay theme set for me, but I would have preferred something a bit tighter – maybe that all of the theme entries had to do with the pizza itself (CRUST, SAUCE) instead of the accoutrements (BOX, CUTTER), but it certainly works. We have LAURA Bush and MAE West representing for the women in the puzzle, which isn’t none.

Okay, hate me for this game I keep playing but, aside from [Fed. law known as Obamacare] ACA, is the most recent reference in this puzzle MIR or Sam MALONE from “Cheers”? Maybe ABU from “Aladdin”? If ACA, MIR, and LAURA had been clued differently, this same puzzle could have run in the early 90s or early 2000s, right? Some Google searching tells me that WEAK SAUCE originated in the 80s, but maybe it didn’t come to more popular use until later, so maybe that’s what pulls this puzzle into recency? 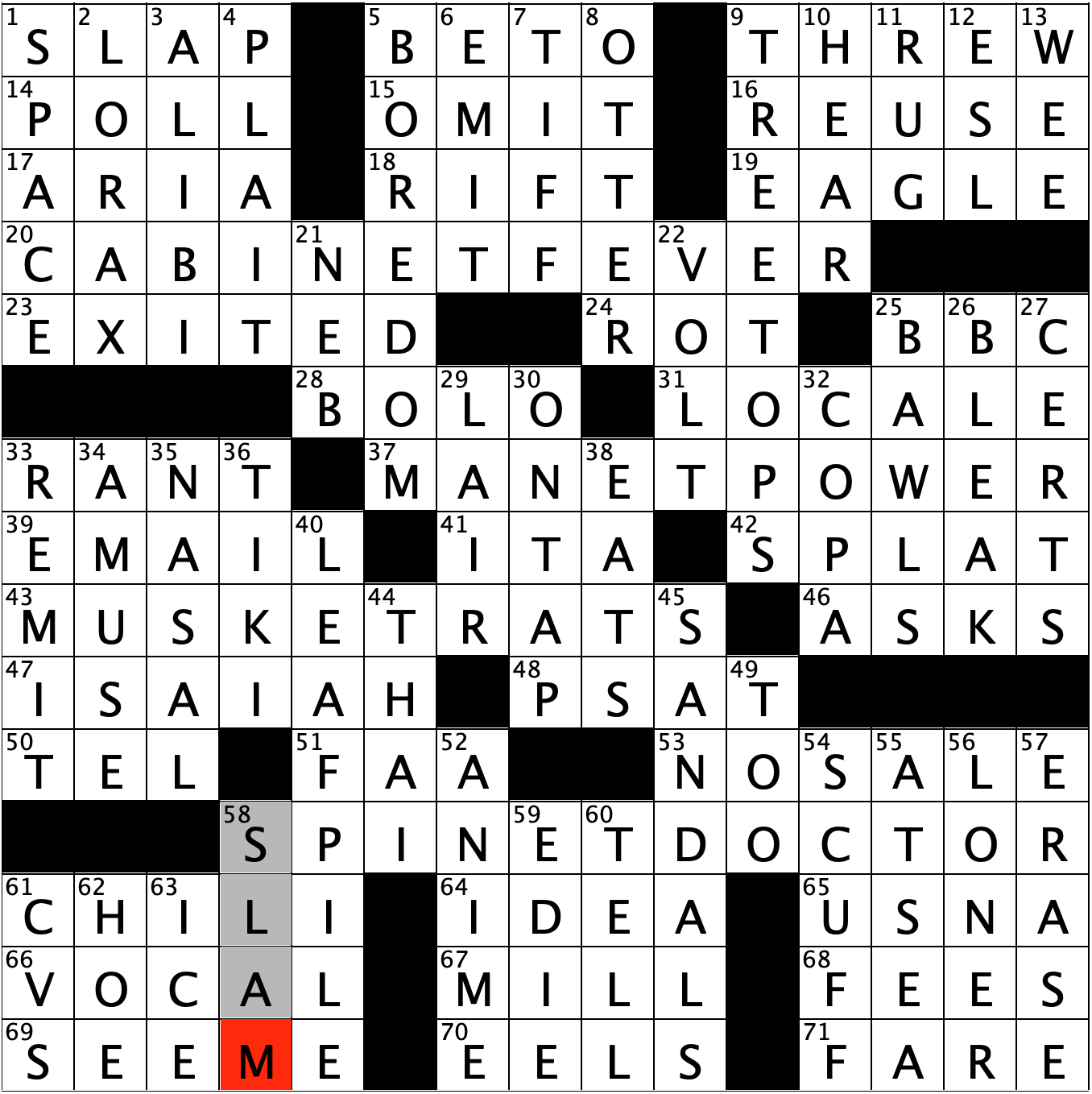 Another day – another awesome puzzle written by a women – another PERFECT title. I got CABINET FEVER first – and my thought was something along the lines of “ET got in there” and then I saw the title and I laughed a lot. Figuring out the theme that early made the rest of the answers come easily. Add this one to the list of puzzles I wish were Sunday sized so we could have more themers! Every single one of them made me literally laugh at well. Perfect cluing and a really fun theme all around. My favorite answer FOR SURE was MUSKET RATS [Rodents with miniature Revolutionary War weapons?] and with that clue I just have the clearest image of that in my head and it’s so funny.

I started this puzzle with downs and as soon as I hit LORAX [Dr. Seuss’s environmentalist] I knew I was going to love it. Looking back now a lot of what I loved was environmental – namely LEAF PILE & TREE TOPS. But really fantastic fill all around – and a layout that allowed the puzzle to fly.

And in case you haven’t watched E.T. lately…

P.S. Is there anyone out there with better photoshop skills than I? Because I would LOVE a pic of MUSKET RATS as clued here – I would be forever grateful

Yay! It’s an ACME two-fer (see the NYT for her other one)! Over at Universal, David Steinberg is doing a Women’s March with over a month of puzzles only by women. (Be sure to check it out!) Is it possible the WSJ is participating, too? Or at least upping their puzzles-by-women percentage? We’ll have to wait and see, but we’re off to a good start.

This one is pretty straightforward, being a Monday and all. TIED UP IN KNOTS is our revealer (50a, [Really nervous, and a hint to the circled words]). The other theme answers all start with an anagram of TIED. 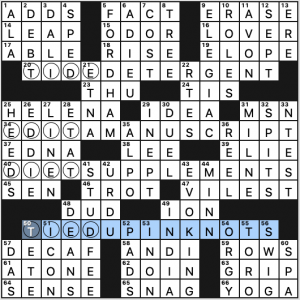 You don’t see 13-letter revealers too often because they’re so difficult to work with. You either have to put them in the middle row or else the 12th row as was done here, which constricts all the other theme answers to the central area of the grid. But with only four of them, it’s not too bad. Still, having two grid-spanning theme entries separated by only one row is no easy thing to work with.

Interesting how she chose to center-align the two outer themers; it makes me wonder how this whole puzzle might have worked with left/right symmetry instead of the usual rotational symmetry.

Simple and sweet anagram theme. The only nit I’ll pick is that I like theme entries to be in-the-language phrases. EDIT A MANUSCRIPT doesn’t pass that test for me whereas something like EDIT MENU does. But obviously that messes up the symmetry.

Nothing too flashy in the fill, but it’s mostly solid. I like seeing STUD FEE, HELENA, ELEGIAC, and FORDHAM. This last one is of course clued as the university, but I’m more familiar with the little village of FORDHAM in Cambridgeshire, England which boasts the White Pheasant pub, a Michelin Guide-featured restaurant. If you’re ever in the neighborhood…

N-TEST and URDU are tough for a Monday; newcomers might balk at the likes of those.

This was a tough one! I really struggled to get a toehold into the puzzle because the only section for me that was fast was the SE, which is pretty segmented out of the rest of the grid. The long stuff is fabulous, but definitely clued for a higher level of difficulty. There is also *lots* of fill with proper names and very tricky word play clues (and one dupe). But that grid design tho! You’ve got *six* 11s crossing the middle in a double staircase. Pretty freaking cool. 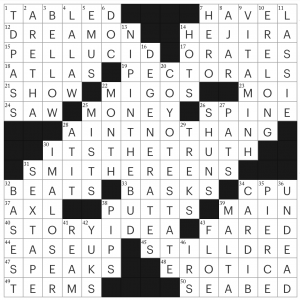 Starting with the double-perpendicular-staircase situation: we’ve got AIN’T NO THANG / ITS THE TRUTH / SMITHEREENS going across and and NIP IN THE BUD / DEGENERATES / COYOTE STATE going down. All really strong long entries! Also the home of the dupe: IT’S THE TRUTH duped the word “truth” in the clue on ERE LONG (“Truth is the child of Time; ___ she shall appear to vindicate thee”: Kant).

Overall, although this took longer than usual, I still really enjoyed the solve.  This was a worthy struggle!

p.s. We don’t review the Erik-Agard-helmed USA Today puzzle here on Fiend, but if you are so inclined, you can solve it online… and I wrote today’s puzzle, so I encourage you to do that!