What a lovely puzzle, eh? Lots of goodies everywhere, so let’s get to it.

Lynn brings us two-word phrases where the first word is doubled and changes meaning because of it. 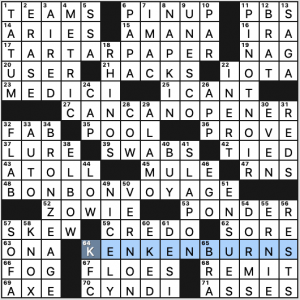 Now, I figured this theme had been done before, and sure enough, I found two previous versions in Cruciverb, both from 2008 as it turns out. Both of those also had CAN-CAN OPENER and BONBON VOYAGE. But 12 years is plenty of time to return to a theme, and since those were in different venues, the point is moot anyway. I’m not concerned about the duplication of theme answers because 1) based on her body of work, Lynn Lempel is a professional, and 2) any constructor who hit upon this idea of doubling the first word is bound to come up with those two specific answers, as fun as they are.

Moving on, how can one not like a grid that has PINOT NOIR and BRONZE AGE in it especially when that last one crosses ZOWIE at the Z? Elsewhere, there are MEDICI crossing RHINOS as well as SLAP ON, UNESCO, and George Washington’s Mt. VERNON. Plenty to like there, and not even a hint of anything close to questionable in the fill (okay, maybe ON A). Like I said, Lynn’s a professional.

Quite a fun and clean puzzle. Four stars. 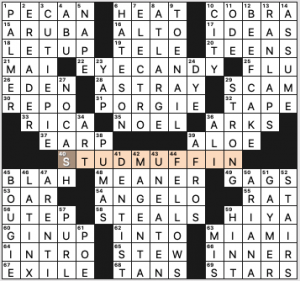 The puzzle, like pretty much any puzzle Erik writes, is noteworthy for its inclusivity. We have Ella MAI (“Boo’d Up” is super catchy, and her costar in the video is a stud muffin), EARP clued via female TV character Wynonna, Mahershala ALI, the Jackson 5, FELLOWS clued via the gender-neutral Genius Grant winners, black vocab BOUGIE (45d. [Concerned with wealth, possessions and respectability, in modern lingo]), LATINX (this is inclusive of Latino and Latina and also covers nonbinary folks; I believe it’s usually pronounced la-tee-nex), ARIANA Grande, and a generic GAYMER (new to me: [Portmanteau coinage for a queer-identified e-sports player, say]).

THEME: Each theme answer ends with an increasingly severe rain 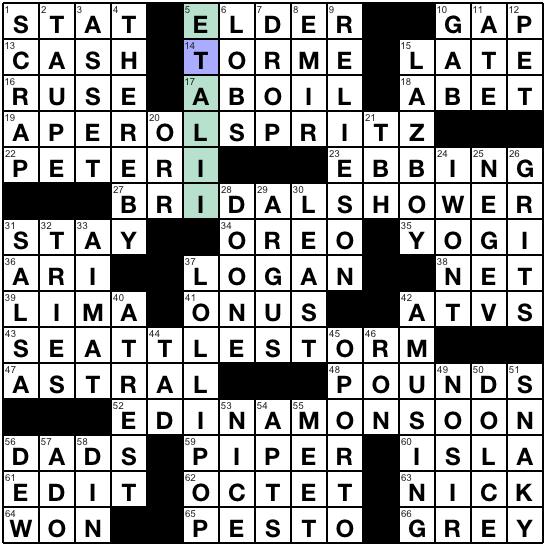 Super fun puzzle today – but sadly I am very short on time. I loved this weather progression – and it felt appropriate to have so many women-focused themers for this month! I could go on and on about my thoughts on a wedding dress made from toilet paper so my fav clue definietly goes to BRIDAL SHOWER and favorite of the themers was EDINA MONSOON – both a great name and a great character.

Some Ab Fab moments to make up for my short review! 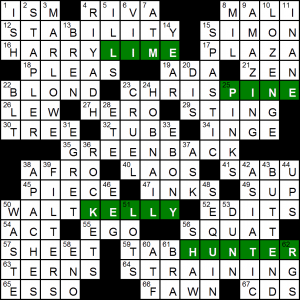 GREENBACK is the central revealer to today’s puzzle. Sure enough, four names, one fictional and three real, end in greens. The number of “___ GREEN” types is quite large, but I appreciate that all four are among the more “canonical” greens. Three-quarters of the themers also lend a ca. 1950 vibe to the puzzle.

I had some trouble with the name pile-up in the top left. Apart from fictional HARRYLIME, we have RIVA, RIYADH (that was at least an insta-get), BREN (immediately dropped stEN, causing a lot of pain), MARLOWE and LEW. Two of these continue where the themers left off… 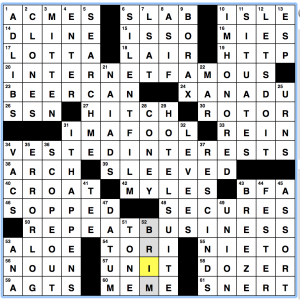 Wyna Liu has a themeless for today’s AVCX, guest-edited by Fiend’s own Amy Reynaldo!  Much like a dark chocolate peanut-butter cup, this is two great tastes that go better together.  Let’s poke around at the fill:

I’ll leave it there, but this was a clever, tricky grid to solve and I enjoyed every minute of it.