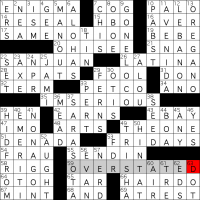 hello and welcome to episode #614 of matt gaffney’s weekly crossword contest, “Add to the Mix”. i solved this week 1 puzzle without the instructions. what are the theme answers? there are eight clues with a parenthetical number, one each from 1 to 8:

to round it off, we have this hint at 59-across: {Like the eight theme entries, you might say} OVERSTATED. with the hint in mind, i very quickly saw that OREGANO was just OREGON + one more A, lightly anagrammed. the others were similarly anagrams of states plus one more letter:

the extra letters spell out ARPEGGIO, which is GEORGIA plus another P. it seemed to make sense to have georgia, rather than ARPEGGIO itself, be the meta answer, and so it was, because the instructions asked for one of 50. (can’t say “state” there because of the reveal answer OVERSTATES.)

i thought this mechanism was very elegant, but it felt more like a week 2 than a week 1, even with a fairly heavy hint. maybe it’s just me, though. it’s a nice construction, though, with pretty clean fill despite nine medium-length theme answers. they’re not quite symmetrically positioned in the grid because the lengths don’t really match up, but that didn’t bother me in the least.

that’s all i’ve got this week. how’d you fare on this one?