I love the title here which I only just grokked. It’s a hint that Ws are changed to Ms in the theme answers. 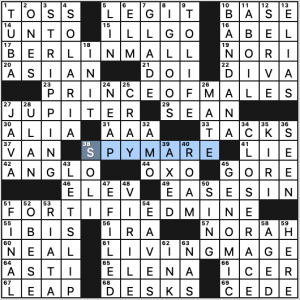 Not bad. Nothing here struck me as lol-funny which is what I’m always hoping for in wackified puzzle themes, but it’s solid enough.

The solve proceeded slowly for me though. I didn’t feel like I was on the right wavelength, and halfway through I got thoroughly distracted by the news of the ACPT cancelation (see the previous post).

But that doesn’t take away from the nice fill here: JUPITER, BANDANA, LET SLIP, VIRILE, GENOMIC and CLOSE RACE (such as our Washington state Democratic primary which is virtually still neck and neck). Some crosswordese in ABOIL, ALIA, ULAN, etc.

As soon as I hit the center theme clue of this Thursday’s NYT, I shredded through the rest of the puzzle, getting a near-record Thursday time.  It was that much of a giveaway: 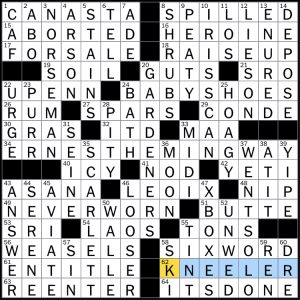 Though it’s apocryphal at best, Hemingway is supposed to have won a bet with other authors by writing the following SIX WORD (58A) story:

It takes the right eye to notice that BABY SHOES and NEVER WORN are the same length, as are FOR SALE and SIX WORD, but something about this theme still felt lacking.  This didn’t feel as experimental as I expect a Thursday NYT to feel.

This is not blazingly hard. In fact, unless I missed something, it’s NYT Wednesday-level.

The theme answers take us on a tour of the five senses. 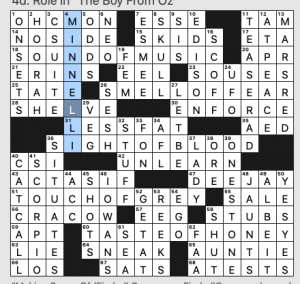 After I got the first two, I was hoping the theme would be all movie titles. Two movies, one song, one play-turned-movie, and one random phrase is less satisfying. 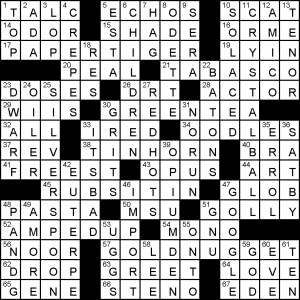